Use of artificial intelligence in Latin American media still scarce, according to report

In recent years, artificial intelligence (AI) stopped being just an element of science fiction. The automation of processes and the creation of systems that mimic human behavior has reached journalism and is being used to design tasks of news gathering, content creation, distribution, marketing and subscriptions. 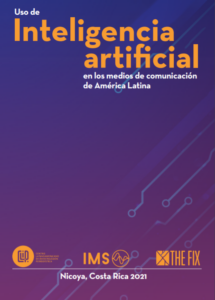 Although the potential of AI is vast and the region is hungry for knowledge on the matter, its implementation is still scarce; this is according to a report* on the use of AI in media in Latin America published by the Latin American Center for Investigative Journalism (CLIP), International Media Support (IMS) and the media outlet The Fix.

The report, published in September 2021, and which is called "Use of Artificial Intelligence in Latin American media,” emerged as an initiative of the Denmark-based IMS, which sought to analyze the use of AI and machine learning in the region's media.

"Thanks to a common contact, we realized that both organizations were interested in the use of innovative technologies in investigative journalism and we decided to join forces," Emiliana García, from CLIP’s area of operations, business and finance, explained to LatAm Journalism Review (LJR).

"IMS supported with the financing and the experience of studies of emerging markets, CLIP coordinated the local report and opened its network of contacts so that Juan Melano, an expert in technology and communication from Argentina, could carry out the interviews and the report," García added.

Melano spoke with representatives of 32 Latin American media and was able to identify the status of integration of journalism with AI.

“The main feeling I was left with, after the interviews, is that there is still a lot to do,” Melano explained to LJR.

Need for training and lack of budget

The report shows that there is a clear need for organization-level training in AI beyond the creation of articles for publication in Latin American media.

“It is paradoxical, but despite having a lot of knowledge of its potential, little or nothing has been done at the organizational level to implement artificial intelligence systems in the media,” the text says. 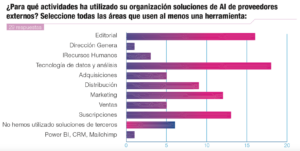 "For which activities has your organization used AI solutions from external providers?":  Data technology and analysis ranks first, followed by editorial and subscriptions (Screenshot from report on AI in Latin American media)

There is a clear will to adopt AI in newsrooms, according to the surveys. But, the editors interviewed for the report say they lack the budget and human resources to do so.

“In most of the newsrooms we surveyed, the opportunity to integrate artificial intelligence into everyday processes has not been seized. The usual response was the lack of resources and the absence of a corporate vision to implement artificial intelligence technologies as a fundamental part of the future of the organization,” the report explained.

Similarly, the text states that the most common request of journalists was to receive training and exchange experiences with other media. So, they conclude that the region is eager to enter the field of AI, but lacks basic information about available opportunities.

According to the creators of the report, the topic most mentioned in the surveys was subscriptions. 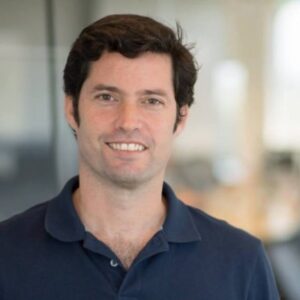 “Using algorithms to make sense of data appears to be the holy grail of reader monetization. Several news organizations in Latin America are working or are willing to delve into this matter. Especially in the case of television networks, which are not used to this type of tool,” the report said.

Media are making use of machine learning and AI to understand in depth the segments of consumer habits, user loyalty and integration of advertising campaigns.

“We have an industry that is in crisis in its business model. It's interesting to see how these technologies can help reverse the trend and improve the numbers,” Melano told LJR.

As the report explains, the implementation of AI aims to attract readers and lead them to become subscribers.

“Once subscribed, the focus is on retention. The process is tightened together using automation techniques, such as email automation for onboarding and retention of current subscribers, analysis of content consumption throughout the subscription period, widget personalization on the homepage and related stories to increase the perceived value of the content and other marketing techniques such as retargeting,” the report said.

Most of the respondents in the report mentioned Piano, a digital content monetization software, as a subscription solution because it also provides many complementary functionalities (content recommendation, segmentation and paywalls).

Some media in Latin America have approached the use of AI and management of large databases to carry out journalistic investigations. 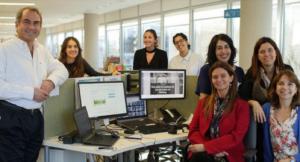 "I was pleasantly surprised that there are media that are doing things that are very interesting," Melano said.

An example, which is reflected in the report, is an investigation by the data department of the Argentine newspaper La Nación to identify the existing solar farms in Argentina. Using a machine learning algorithm, they were able to map twenty fully operational solar farms in the country, and detect two more private ones.

“For this investigation, we worked as a team with an artificial intelligence company, Dymaxion Labs, because we did not have the know-how. They gave us the algorithm and the hosting to process it,” Florencia Coelho, co-founder of La Nación Data team, told LJR. 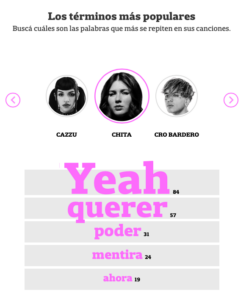 It took thirty hours for the image classification algorithm to detect the solar farms in operation in the country and it was the first time that the journalistic team had experience with AI. They later carried out other projects such as AIJO, in which they sought to understand, identify and mitigate biases in newsrooms through AI.

This year, as part of their experimentation process with new technologies for journalistic production, they analyzed Trap song lyrics by Argentine artists with Natural Language Processing (NLP). Similarly, the newspaper is working internally on a gender equity detector for its texts and sources.

“The biggest obstacle is the learning curve. A lot of time is wasted trying to learn how this works. There's a lot of work collecting, sorting, and then checking because artificial intelligence isn't that smart,” Coelho said. “The idea is that what we learn,  later it will be easier for us to reuse it. For example, the work we did on Trap can be used for other projects. It is a long-term investment.”

Melano, head of investigation for the report and founder of technology solutions companies for media, agrees with Coelho and says that the important thing is to start because "once you incorporate AI in an example, it will be easier to replicate it."

At the end of the report, there are 10 recommendations for applying AI in news organizations. The first of these is to establish a five-year plan that helps to set the correct objectives and the appropriate implementation according to the type of media outlet that you want to be later on.

Other recommendations include appointing a team or product leader, forming an interdisciplinary team, setting realistic deadlines and short goals, collaborating with other media, measuring performance, etc.

As for the feedback in relation to the publication of the report that the CLIP team has received from the community of journalists and product developers, it has been scarce so far.

CLIP hopes to continue publishing on the subject and supporting Latin American media in their leap to technology.

"The idea with the report was to identify what is really happening and provide tools to improve the situation," Melano said.