Carlos Fernando Chamorro, one of the most important journalists in Nicaragua, and founder and editor of the magazine Confidencial, decided to go into exile in Costa Rica as repression of the independent press grows in his country, as he announced on Jan. 20.

Through his opinion column on Confidencial, Chamorro said that "faced with these extreme threats [that point towards the criminalization of my professional work], I have been forced to adopt the painful decision of going into exile to protect my physical integrity and my freedom, and above all to be able to continue exercising independent journalism from Costa Rica, where I am at this moment.” 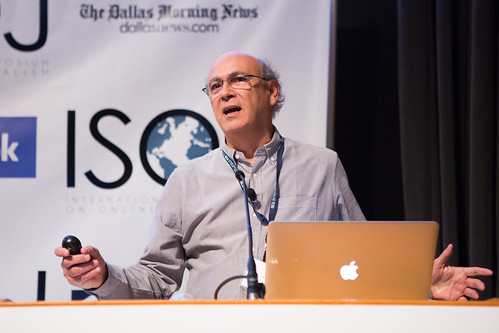 Carlos Fernando Chamorro at the University of Texas in 2017. Photo: Mary Kang/Knight Center.

The announcement comes five weeks after the National Police raided the facilities where the newsrooms of Confidencial magazine, its digital site and the TV shows Esta Semana and Esta Noche operate.

At the time, Confidencial reported that members of the police had illegally entered around midnight on Dec. 13, 2018 and took away computer equipment and documents. Officers continue to occupy the building.

Chamorro said they have used "all the legal mechanisms to assert our claim to justice." These resources include a right of petition and information before the Police, which he said "responded to us with physical aggression." He also filed a complaint of theft with the public prosecutor and an application for amparo before the Supreme Court of Justice so that the end the occupation of the facilities and the return of "the stolen property” could be ordered.

“However, not only has there not been a corrective response from the authorities, or even some attempt to explain or justify this manu militari takeover, but on the contrary, it has aggravated the threats that point towards the criminalization of my professional work,” Chamorro wrote.

He said that from Costa Rica he will continue to work as a journalist at Confidencial, as well as  at Esta Semana and Esta Noche. In fact, he was on the Jan. 20 program of Esta Noche in which he also announced his exile.

“I am convinced that better days are coming for Nicaragua, and it is imperative to keep open all spaces of freedom of expression, to continue building the hope of a new Republic, as my father, Pedro Joaquín Chamorro, dreamed," he wrote in his column . "A democratic republic with social justice, based on profound institutional reforms, that this time they make irreversible the guarantee that a dictatorship will never be imposed again. A democracy without surnames, to stop the seed of dictatorship, caudillismo, and authoritarianism at the root.”

In his column as well as in his program, Chamorro also called for civil society and businessmen to defend press freedom. He also demanded the release of Miguel Mora and Lucía Pineda, director and news director of the channel 100% Noticias, respectively, who on Jan. 21 completed one month in detention. The two journalists face charges of "fomenting and inciting hate and violence" and "provocation, proposition and conspiracy to commit terrorist acts." Their first hearing is scheduled for Jan. 25.

Pineda was able to receive a visit from a relative for the first time on Jan. 22, according to Despacho 505. Her brother said that the journalist was subjected to 30 interrogations on Dec. 21 and 22, and they wanted to force her to record a video asking forgiveness from Daniel Ortega and the police, the site added. Given the journalist's refusal, "she was confined to an isolation cell for a week," the brother said, according to Despacho 505.

Chamorro also called for “persecution of the independent press to end,” including those in the media in the country as well as the “more than 50 journalists who are in exile.”

“We call on citizens to continue rejecting censorship and self-censorship through social networks, and to entrepreneurs, small, medium and large, to support the independent press, which in the crudest moments of the persecution, continue to write the most beautiful pages of national journalism,” Chamorro wrote.

Carlos Fernando Chamorro is part of one of the most recognized families in Nicaragua. His mother, Violeta Barrios, was president of the country, and his father, Pedro Joaquín Chamorro, also a journalist, was murdered in 1978, "in a crime that provoked riots in the streets because of accusations that it had been ordered by the dictator Anastasio Somoza,” David Adams published in Univisión.

In his youth, Carlos Fernando supported the Sandinista National Liberation Front (FSLN), a group that 18 months after the assassination of Pedro Joaquín overthrew the Somoza dictatorship. However, it is precisely the government of Daniel Ortega, a leader of the FSLN, that is behind the repression against the press.

On Dec. 14, the rapporteurs for freedom of expression of the UN and the IACHR condemned "the repeated attacks, raids and forms of censorship against journalists and independent media in Nicaragua, and urgently call on the State the guarantee the work of journalists and stop any kind of harassment, persecution and pressure against the press.”

“The situation of freedom of expression in Nicaragua is grim, due to the aggressions, censorship and police and parapolice forces persecution against the press,” Edison Lanza and David Kaye said, in the release.

The IACHR had also granted precautionary measures to different journalists and their families. Chamorro, his wife, the newsroom of Confidencial, and other reporters, including Miguel Mora --director of 100% Noticias--  were among the recipients.