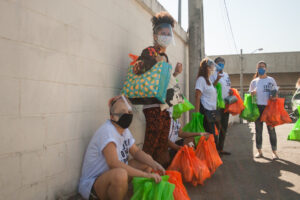 During the pandemic, the number of COVID-19 cases in the favelas was reported through official statistics. However, from the beginning, community journalists and local doctors from clinics in favelas warned that these figures from local authorities did not reflect reality.

"While we - the inhabitants and public health personnel in the community - observed a hundred new cases, the State reported a dozen," said Bruno Sousa and Mariana De Paula Santos, founders of LabJaca, the data and information journalism laboratory that was born in the pandemic in the favela of Jacarezinho, in the northern part of the city of Rio de Janeiro, Brazil.

Community communication is a circular service: they take care of each other. The members of this team of journalists and university researchers were born in this favela of 55,000 inhabitants. There are several news outlets that tell the story with their own voice of what happens in the favelas of the city. And they all have a common denominator: these are young people committed to a human rights agenda.

Voz das Comunidades, a community newspaper, was founded by René Silva, an inhabitant of the Alemão Complex. At the age of 17, he reported a police and military occupation from what he saw with his own eyes as an on-the-ground storyteller and in 24 hours he went from 300 followers to 10,000 on Twitter. Today, Voz das Comunidades provides content to mass media such as Globo and Yahoo.

A similar example to LabJaca and its data journalism is Data_labe in Complexo da Maré, a set of favelas in the same northern region of the city.

"We act because the official data does not take into account the nuances of the periphery, which only we know," Gilberto Vieira, co-founder of Data_labe, said. 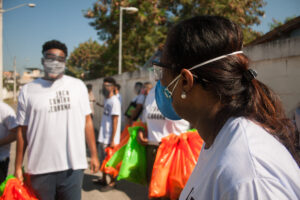 After the COVID-19 experience, LabJaca wanted to know what was happening with other infectious diseases such as dengue fever, which is frequent in the favelas due to housing and environmental conditions. Although dengue increased by 44 percent in 2022, researchers warn that the effect of the pandemic could have caused that cumulative increase since 2020 that made it grow steadily.

"That could have happened due to a lack of mosquito control actions," said Claudia Codeço, coordinator of InfoDengue of the Oswaldo Cruz Foundation, a technical-scientific institution that conducts research on issues related to collective health.

Guided by the principles of citizen-generated data, LabJaca seeks to generate data and statistics on human rights, environmental and public safety issues.

In mid-2021, these young journalists together with professionals from the scientific institution Fiocruz, started a field research action to not let the silent spread of dengue fever pass them by.

"We wanted to know the perception of our neighbors about dengue, and if they knew the ways of transmission and prevention," Mariana De Paula Santos, of the LabJaca team, said. While handing out basic food baskets to neighbors on a soccer field in the community, they conducted a series of surveys of more than 100 inhabitants.

As a result, they prepared the report Dengue in Jacarezinho which drew two main conclusions. The first: 69 percent of the inhabitants interviewed are aware that they are exposed to the virus in their daily lives. The second: six out of ten people said they do not see public measures taken by the State to clean up the problem, especially during the last few years.

"They know about the discrimination we live with and the environmental racism," Bruno Sousa, LabJaca's communication coordinator, said.

The concept of environmental racism came about in 1981 in the United States by the African-American Benjamin Franklin Chavis Jr. The term refers to racial discrimination in the elaboration of environmental policies - on water, basic sanitation, habitat, toxic waste - that do not take into account specific groups or communities such as the Black community.

Rumba Gabriel, a 67-year-old inhabitant of Jacarezinho, says it in other words: "When I was a child, I used to swim in this river, which today is a garbage dump.”

A result that LabJaca's team considers fundamental in the report is that, apart from citizen awareness of the danger and exposure, 90 percent of those interviewed know that sanitary water helps kill the larvae, that is, they know how to prevent the dengue mosquito from festering at home.

Research and communication campaigns go hand-in-hand. That is why the report on dengue was the incentive for the production of a series of videos and awareness campaigns. In one of them, a young Black man goes on a monologue, with humor and satire, about the housing situation in the favela. The video had more than 16,400 views on LabJaca's Instagram.

"With the results of our data production, we seek to empower the inhabitants so they can demand action from the local public authorities and exert media pressure," Bruno Sousa said.

In another of the videos produced, 23-year-old Ana Beatriz Nascimento, a resident of Complexo Lins - near Jacarezinho - says to the camera: "the lack of drinking water and basic sanitation is naturalized. We end up seeing it as normal to raise children next to a polluted river. This is also environmental racism.”

In November 2022, at the COP 27 (Climate Change Conference) in Egypt, LabJaca actively participated in the debates on the impact of climate change in the world. Together with other young Brazilians, they demanded climate justice for Brazil and, above all, historical reparations for the victims of environmental tragedies in that country and in the world - the basis of which is environmental racism. 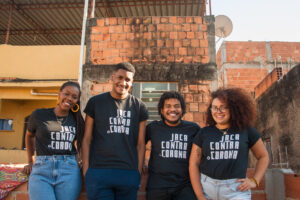 Jacarezinho has been under police occupation since 2013. In most of Rio de Janeiro's favelas, the risk of being shot dead is three times higher than in any other region of the city. In 2021, one such operation resulted in the mass murder of 28 people. That's when LabJaca took on a community task to help ease the mood of neighbors. Within weeks, the team organized a graffiti festival in which artists from all over Brazil covered the walls of Jacarezinho's houses with cheerful colors and motifs to cover up the bullet marks from the police operation.

One of the actions by the local government of the state of Rio de Janeiro has been to create a program called Integrated Cities.

"1,300 security agents were installed in the territory with the promise of infrastructure improvements and violence reduction. But, what it generated was more armed violence," Pedro Paulo, a LabJaca researcher, said.

LabJaca decided to put together a coalition of civil society organizations and, together with the Fluminense Federal University, they set out to record the perception of Jacarezinho’s inhabitants on the State’s actions. They surveyed 387 inhabitants and the result was as follows: 70 percent of those interviewed expressed a greater sense of insecurity since the start of the government program and 50 percent said they had experienced a situation of invasion of their homes by the police in the context of its operations.

"The population needs to understand what the public expenditure on these operations is and how it could be invested instead in education, culture and health," Bruno Sousa said.

The research and surveys went further. After presenting the report, they launched a campaign and produced a video on public safety that surpassed 65,000 views on social media. With innovative visual resources, the video shows the equivalent of spending on weapons and compares it to the social and educational investments that could be made with the same money that is allocated to the police structure.

"Did you know that a low-cost police rifle could finance a year of study for a student in the public education network?," says a voice-over from minute one of the audiovisual piece.

The issue of guns and violence was mentioned throughout Luiz Inácio Lula da Silva's presidential campaign: "It's time to lower the guns. Less guns and more security," were recurring phrases. 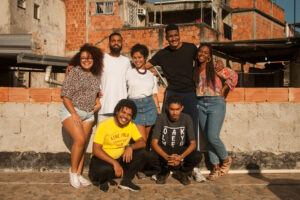 The professional dream of LabJaca's young journalists is to have an impact on the local population.

"We want to have more research methodologies that we can replicate in an open database for public consultation," Bruno said.

They seek to empower citizens to bring these issues to the public debate and to be able to demand action from the State supported by a solid database.

Recently, they partnered with Cipó, a research platform on climate issues. They produced an audiovisual series with favela residents called "Ampliando Voces" (Amplifying Voices). The focus: the water crisis and lack of basic sanitation in Rio de Janeiro.

"Environmental problems do not belong to just one place, one region or one favela, they are problems that affect everyone," says the voice-over of an inhabitant at the beginning of the video.