“What this initiative seeks to do is to cut off financing for media that have shown the most corrupt face of this administration. That’s the point,” César Fagoaga, president of the Association of Journalists of El Salvador (APES, by its Spanish acronym), told LatAm Journalism Review (LJR), regarding the foreign agents bill presented by Salvadoran President Nayib Bukele.

The Legislative Assembly of El Salvador is expected to approve the Foreign Agents Law in its plenary session of Nov. 17. 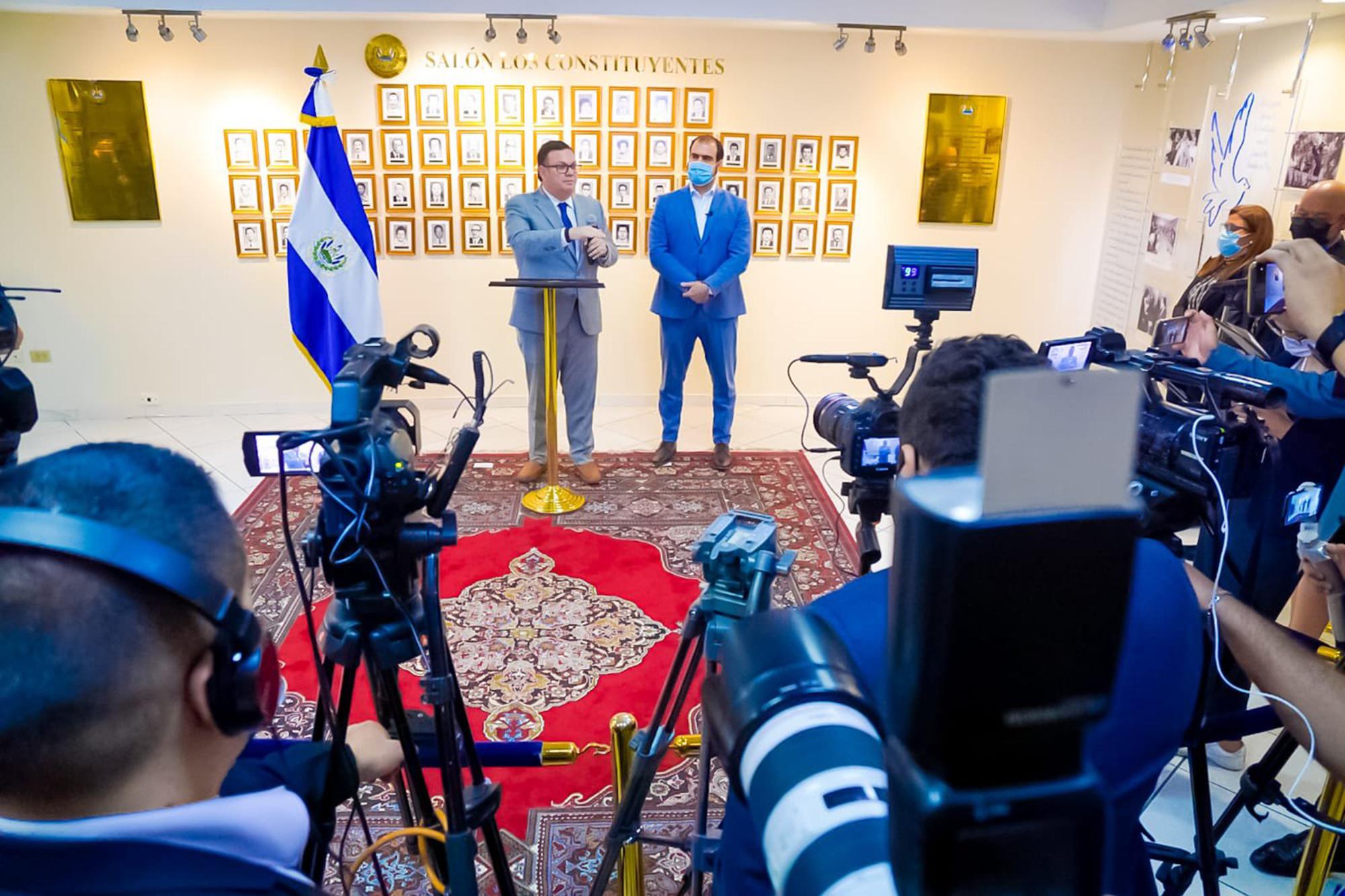 Minister of the Interior, Juan Carlos Bidegain, delivers the proposal for the Foreign Agents Law to Christian Guevara, head of the ruling party New Ideas. (Photo by El Faro, courtesy of the Legislative Assembly)

If this law comes into effect, all organizations that receive funds from abroad will have to pay a 40 percent tax for each financial transaction. Exceptions to this law are commercial, humanitarian, religious, health, school, academic, scientific, or fine arts organizations. In addition, in accordance with Article 12, the approval of any regulations that it deems necessary for the application of this law will be at the discretion of the Presidency.

Likewise, any breach of the law will have a penalty of US $10,000, in addition to the possible cancellation of the legal personality of the offending organization.

During the first 90 business days following the law’s approval, all organizations receiving funds from abroad must register as foreign agents, according to Article 14 of the Law. Failure to do so within this time limit will result in sanctions.

It has the recent addition of an article that calls for 2 to 5 years in prison for organizations or persons registered as foreign agents who put national security at risk, according to what journalistic site El Faro reported via Twitter.

After presenting the bill a few days ago, Bukele said in a statement that it aims to guarantee security, national sovereignty, and the social and political stability of the country.

"Foreign interference to finance terrorist acts or political activities will be prohibited, and donations for tax-free social causes will be encouraged," he said.

The Inter-American Commission on Human Rights (IACHR) and its Office of the Special Rapporteur for Freedom of Expression asked the government of El Salvador not to approve the Bill on Foreign Agents in an urgent press release on Nov. 17.

The IACHR expressed its concern about the criminal and administrative sanctions that could derive from non-compliance with the provisions of the law on the management of resources.

“The Commission and Rapporteur consider that, if approved, the initiative could restrict the legitimate functioning and activities of individuals and civil society organizations that act in defense of human rights and independent journalism, who sometimes receive resources from abroad for their development.”

In a statement on Twitter, the regional initiative Center Against Corruption and Impunity in North Central America (CCINOC) said that the approval of this law would criminalize the defense of human rights and the fight against corruption, as is the case in Nicaragua and Guatemala, since “it would allow the immediate suspension of activities by social organizations and media that receive funding from non-Salvadoran sources.”

José Luis Sanz, former director of El Faro and current correspondent in Washington, D.C., told LJR that the current bill gives “an enormous margin of arbitrariness.” Regarding investments, “the law makes an explicit reference in its wording to foreign agents that seek to influence public opinion, which logically raises the suspicion that media are at the forefront of questioning. (...) The law is written with the assumption that receiving funds from abroad makes you an instrument of others.”

Regarding the law, the legislator and head of the ruling New Ideas party, Christian Guevara, made a direct reference to the income earned by journalists at El Faro and GatoEncerrado when he said that their “juicy salaries” were going to end because “in a few days, 40% of what they receive from Open Society and other funders will be for taxes,” El Pais published.

The Committee to Protect Journalists (CPJ) urged the Legislative Assembly of El Salvador to reject the bill that would force media and journalists who receive funds from abroad to register as foreign agents.

El Faro journalist Julia Gavarrete told LJR that the main objective of this law is to silence the critical press, to have a control mechanism and manipulate public opinion.

“Try to also stop the work of opposition organizations, of organizations that work in communities in an organized way, which is something this government has never liked, for us to have social organization,” she said.

The regional NGO based in El Salvador, Cristosal, stated that the proposed law on foreign agents makes the work carried out by human rights organizations unfeasible, "restricting the benefits of international solidarity for the population." According to this NGO, transparency mechanisms already exist in the country's regulations to declare the origin and use of donations from abroad. This new law would criminalize and stigmatize civil society organizations.

The potential vulnerability of journalists and social organizations in El Salvador is "enormous," said Sanz, in the face of a state controlled by the Executive, "which has given ample signs of arbitrariness and abuse of power."

Much of the critical independent media in El Salvador, such as El Faro, Revista Factum and even APES, receive funds from international sources, in addition to domestic revenue.

"There is an attempt to contain, to gag, to block any criticism, whether this criticism comes from civil society or media that are doing a commendable job in pointing out corruption," Fagoaga said.

According to Sanz, corrupt governments and authoritarian governments accept international isolation as the price to pay to consolidate their power and arbitrary actions.

“Unfortunately, this happened in the 2009 Honduran coup; It happened with the closure of the CICIG in Guatemala, and more clearly it has happened during the decline of the Daniel Ortega regime. It seems there is a decision not to stop, even if that entails international condemnation and isolation, of course,” Sanz said.

Nicaraguan journalist Aníbal Toruño, director in exile of Radio Darío, told LJR that in Nicaragua a large number of journalists, members of civil society, and non-profit organizations have been locked up because of President Daniel Ortega’s Law of Regulation of Foreign Agents.

“The only thing it has done is control, shut down, threaten, and not only that, since it has so many of the opposition in exile, jailed journalists, exiled journalists. The tragedy in Nicaragua is enormous,” Toruño said.

These types of laws in the hands of populist and undemocratic governments, as shown by the path taken by Bukele and Ortega, Toruño said, are "bad news."

Both Fagoaga and Sanz see a very complicated future for El Salvador, because they do not believe there will be a change of course in the short term, but to the contrary, a consolidation of the current government’s authoritarianism.

Journalists with a critical stance in El Salvador see the country following the path of Nicaragua, but Fagoaga prefers to look at the “Nicaraguan mirror” from both sides, and that in part gives him some hope in the midst of adversity.

“On the one hand, we believe the democratic deterioration has occurred following the same steps. In other words, if one reviews Ortega's authoritarian record, it is very similar to Bukele's,” although in El Salvador this process is speeding up, Fagoaga said. “On the other hand, we see the resilience and courage of our Nicaraguan colleagues. We also like to look in that side of the mirror because we know that even when situations can be adverse, journalism will prevail."

When democracy is at risk, journalism has to show its face, "it is the first line of democratic defense," Fagoaga concluded.

Toruño said he trusts the ability of solid independent media in El Salvador to overcome this situation.

According to Sanz, it has been very difficult to do critical journalism in the country for the past two years. The approval of this law would make all the work much more costly.

“It is clearly an unconstitutional law, which violates national and international principles and standards, and if it ends up being approved it will be an aggression, in my view. But that’s not going to stop us."