"We are carrying out these webinars as part of the activities that the Network for Diversity in Latin American Journalism seeks to support the training of journalists and the media,” said network member Mariana Alvarado. "The intention is to share knowledge and information from colleagues who have developed expertise in coverage of diversity issues and thus increase coverage of diversity with a human rights perspective in newsrooms. Also, to encourage newsrooms to be more inclusive".

The network emerged at the end of 2022 with the help of the Knight Center for Journalism in the Americas and Google News Initiative, which are sponsoring this webinar series.

Since its inception, it has held conversations to plan its structure and future activities. It has also carried out training on diversity with media outlets in Latin America.

Each webinar will focus on a designated topic related to diversity, equity and inclusion (DEI), which Alvarado said was chosen considering feedback from the conversations and training.

During the webinars, experts will provide information, tips and suggestions and an instructor with the network will moderate the discussion and field questions from the participants. 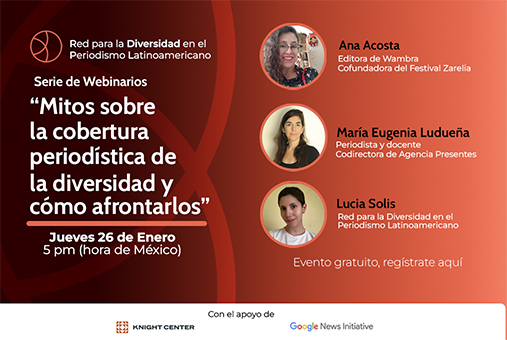 The first webinar, “Myths about journalistic coverage of diversity and how to deal with them,” will take place on Jan. 26 at 5 p.m. CST (Click here to find the time in your city). Registration is required, so sign up now. A Zoom account is required, but creating one is free, easy and quick.

The second webinar, “How to include more LGBTQI+ individuals in newsrooms,” is scheduled for Feb. 9 at 5 p.m. CST.

The third webinar is “Racism and discrimination in the coverage of migration, how to address them” and takes place Feb. 23 at 5 p.m. CST.

The fourth and final webinar, “Gender perspective and how to achieve intersectional coverage,” is scheduled for March 9 at 5 p.m. CST.

As for the future of the network, Alvarado said the plan is to continue offering training and to grow with more journalists interested in its mission.

"Since October 2022 we have been offering training on diversity for different newsrooms in Latin America and while we will carry out these webinars, we will continue giving training. The idea is to increase training efforts on these topics,” she said. “We also seek to grow the network by integrating more journalists interested in promoting coverage of diversity issues and in encouraging newsrooms to be more inclusive. We will also be producing some audiovisual materials to publish with concrete tips and suggestions on how to improve diversity coverage."

Those who attend the 4 webinars will be able to receive a participation certificate from the Knight Center for Journalism in the Americas and the Red para la Diversidad en el Periodismo Latinoamericano.