NPR correspondent Carrie Kahn, winner of the 2020 Maria Moors Cabot, points to the importance of making “alliances with local journalists”

With almost three decades of reporting poignant stories from Mexico and the Caribbean, the American radio journalist Carrie Kahn has been honored with the prestigious 2020 Maria Moors Cabot Award.

“It’s a great honor! I’m very amazed and humbled by the award, especially since it comes from my colleagues and peers in the region,” Kahn said in an interview with the LatAm Journalism Review. 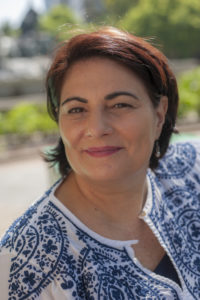 Kahn started working for the National Public Radio (NPR) in 2003. In the last eight years, she has been an NPR correspondent for Mexico and the Carribean. Since her time in Mexico, the journalist has documented the increase in violence in the country, the stories of kidnapping and murder of the Sinaloa Cartel in the country and the capture of Joaquín “El Chapo” Guzmán, the NPR site states.

Likewise, she has reported for NPR the stories of Central American migrants, traveling with them on their way toward the United States, and she has published intimate stories of families that have been separated and destroyed by deportation and the recent anti immigrant laws of the current United States administration.

The Columbia School of Journalism has awarded the 2020 Cabot Award to Kahn and three other journalists from Colombia, Brazil and the United States for their bravery and dedication in their work as investigative journalists in their coverage of the Americas, the institution indicated in their award release announcing the winners of the prize on July 15.

“Carrie Kahn has been bringing stories from Mexico and the Caribbean to spirited life on the radio for nearly three decades. With microphone in hand, she began capturing voices of the border region as a local reporter in San Diego in 1994,” the institution stated in its award release.

With a degree in Biology, Kahn worked for many years in California as an investigator in human genetics before dedicating herself to journalism.

LJR: What does this Maria Moors Cabot award mean to you? How does it make you feel?

CK: It’s a great honor! I’m very amazed and humbled by the award, especially since it comes from my colleagues and peers in the region. You have to be nominated for the prize and with recommendation from colleagues who know the region and work in it. It is really the highest honor I have ever received in my career and it means quite a lot to me.

LJR: Considering the type of journalism work that you do, what does it mean to you to be a journalist in your country and to work as an U.S. journalist in the Latin American region?

CK: I think being an American journalist in Latin America allows you certain protections and privilege that national reporters do not have. I think it’s very important to make alliances and partnerships with local journalists to not only help them in their reporting when possible, but also to provide assistance and solidarity in what has become very trying circumstances for many honest hardworking reporters here.

LJR: This pandemic has exacerbated the inequity that exists in the Americas. What issues or types of reporting do you consider are crucial to cover during the pandemic?

CK: Exactly what you have pointed out, the inequalities that have just been exacerbated during the pandemic. I also am keen on following how governments are dealing with the pandemic in the health sector but also economically. We have seen such terrifying reports of great economic declines in all countries of Latin America, and how many people we see their economic status drop dramatically, with millions falling into poverty. We are watching a generation possibly lost to the pandemic in terms of economic prosperity and that must be a topic we continue to cover for years to come.

LJR: How do you think this pandemic has redefined the way in which reporting is done?

CK: Well, I haven’t really gone out of the office since the pandemic began. That has made much of the reporting very difficult. It has allowed me to reach more people, quicker, by telephone and recording apps. Many people who would previously require an in person visit have opted for telephone and internet interviews more readily.

LJR: When you think of all the people you’ve photographed and all the stories you’ve covered, which ones would you say were the most interesting or with/from which did you learn more?

CK: Oh my, that’s too hard of a question. I’ve been reporting for decades. I guess the ones that stick with me the most are probably the more heart wrenching stories, ones where I have been with people through horrific natural disasters, criminal attacks, loss of life and loved ones. I find particular satisfaction when I can see my reporting that provokes changes in institutions, officials or advocates that help improve someone’s economic, political or personal situation. I also enjoy moments of joy and fun in my reporting and especially love when I get to get out in nature and learn and see new places and majestic landscapes.