Spanish journalist Javier Moreno, currently editor-in-chief of newspaper El País, opened the 14th edition of the Ibero-American Colloquium on Digital Journalism. In a conversation with Rosental Alves, director and founder of the Knight Center for Journalism in the Americas, Moreno spoke about the first year of operation of the newspaper’s paywall and the impact of the COVID-19 pandemic on journalism. He also gave a piece of advice to his colleagues in Latin America: "do not despair.”

It is the second time that Moreno has been the editor-in-chief of El País, one of the most important newspapers in Spain and the world. During the first time, from 2006 to 2014, he led the unification of digital and print operations. Back in office since last year, after leading El País in Latin America for two years, the challenge now is to expand the digital subscriber base.

“What has happened is that in less than a year, in 10 or 11 months, we went from zero subscribers to more than 100,000. Of which 25% are already outside of Spain, most of them in Latin America and the United States. Well, we would have liked to have 250,000 in the first year, but 100,000 in less than eleven months, I think it's a good start. (...) We trust that in three years the newspaper will have a sufficient critical mass to definitively secure its future.”

El País’ paywall was established just over a year ago. This is the newspaper's second attempt to charge for access to news in the digital environment. In 2002, the newspaper limited the site's content for non-paying readers, but losses in audience and advertising revenue led to the paywall being suspended two years later.

“In fact, El País was one of the first newspapers to impose a paywall that we had to abandon because the market was not prepared for it. (...) We have also learned, the world has learned. Readers have also assumed that if you want to maintain quality reporting, you have to pay for it," Moreno said.

In addition to the transformation of the newspaper, which became digital first, and the change in consumer behavior of readers, who began to see value in El País’ paid journalistic content, Moreno believes that the crisis caused by the COVID-19 pandemic contributed to greater need for reliable information. According to him, the newspaper's website traffic more than doubled in the first months of the pandemic.

“People needed information, they needed sites where they felt secure about the information they received. And, on the other hand, newspapers that already had a paid one when the pandemic broke out, also saw their subscriptions increase exponentially. (...) It was a very big turning point in the relationship between readers and newspapers,” Moreno said. 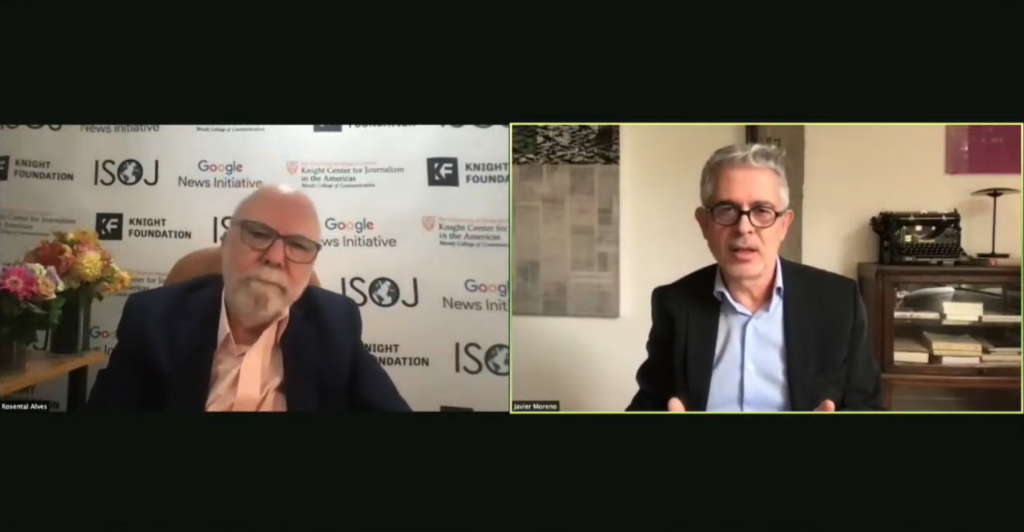 At the end of his participation in the Colloquium, Moreno left a message for journalists in Latin America regarding the future of digital journalism and the profession: “do not despair.” Before taking over El País's leadership, Moreno headed the newspaper’s operation in Latin America for two years, based in Mexico City.

“I know that sometimes there is a cognitive dissonance between what we learn, the demands of quality, the standards of how to do things well and what we find with reality. The reality of weak companies, with weak structures, that cannot sustain the journalism to which we all aspire, not to mention newspaper owners, who have interests other than journalism,” the journalist said.

Moreno said that in Latin America there is discord between what journalists understand as necessary to do their job and business structures that are often unable to accompany them in this effort “at the same level of ethical and moral demands that a newspaper business owner must have with a newspaper, which is to try to do the best possible journalism and not use the newspaper for other spurious purposes."

“So I hope and ask them not to despair, as things improve. (...) So we are going to take this from the optimistic part and trust that increasing awareness also reaches Latin American businessmen and journalism companies that allow us to do the journalism we want.”