Officially titled the “Access to Public Information and Transparency Law,” the legislation will guarantee “free citizen access to public information and governmental transparency” when it comes into effect next year. Among information that will be made publicly available are government salaries, official trip expenses, and active government contracts. 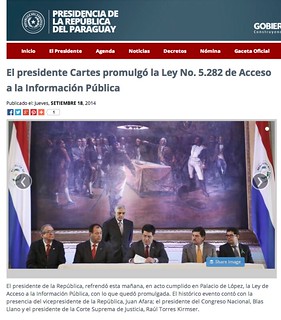 Spearheaded by a coalition of senators from a number of Paraguay's major political parties, the law has been described as part of an effort to root out nepotism, which has historically been prominent among high-level government officials. The law also comes on the heels of a large protest in capital Asunción, where thousands marched on the capitol building last year with rolls of toilet paper, determined to “clean up” corruption in Congress. As the movement gained speed, hundreds of businesses – restaurants, bars, and movie theaters – across the country refused to serve senators accused of nepotism.

“This series of events was known in Paraguay as the transparency spring, and it is contributing to alter the power equation between citizens and public servants,” Ezequiel Santagada, the executive director of the Instituto de Derecho y Economía Ambiental (Idea), told the Guardian in an interview.

One notorious case that was credited for sparking last year’s march on the capitol was that of the so-called “La Niñera de Oro,” or “Golden Nanny,” a woman allegedly caring for the children of Senator Victor Bogado while receiving a salary as a public employee. It was one of a number of cases that caused public outrage and spurred widespread protests in the capital last year.

At the forefront of the FOI movement is Daniel Vargas Téllez, a social activist whose efforts have been key in the passing of the freedom of information law. In 2007, Vargas was involved in a high-profile court case after the mayor of San Lorenzo denied him access to a list of government contractors, their duties, and their respective salaries. In 2013, the Supreme Court of Paraguay ruled in his favor, a decision that would pave the way for later legislation on access to information. Last week, Vargas was awarded the “Torch of Freedom Award,” for his role in promoting open access.

With the passage of the FOI law, Paraguay joins the international openness movement that first gained speed in the 1970s. But as countries from across the world push to pass open access laws, it has become clear that not all FOI laws are created equal. An international report published by the Centre for Law and Democracy and Access Europe found that FOI laws in 92 countries scored an average of 86 points out of a possible 150, highlighting the shortcomings of some FOI efforts.

Paraguay is no exception. Last-minute changes to the law by the Chamber of Deputies have caused some legislators, such as Senator Arnaldo Giuzzio, to label the law as “hollow.” The original law included a penalty of jail time for those convicted of nepotism, while in the modified law jail time was replaced by administrative leave from public office for five years. Senators from the Partido Colorado have joined Giuzzio in criticizing the weak punishments included in the new legislation.

Despite critiques, the law is seen as a positive step towards transparency in a country whose press freedom index recently ranked 105 out of 180 countries by Reporters Without Borders. Four journalists have been killed in the last year and a half while intimidation and threats to journalists remain common, specifically for those reporting on corruption and drug trafficking.