To make way for LGBTQ+ and gender issues in the media, 'uncomfortable conversations' must happen, journalists say during Sexual Diversity panel

Journalists Geo González, from Mexico; Carolina Vila-Nova, from Brazil; and Daniel Villatoro, from Guatemala, have one thing in common — they have dared to provoke "uncomfortable conversations" with their editors, colleagues and media executives to try to get women and LGBTQ+ people have more presence both in editorial planning meetings and in positions of power within the media.

These three journalists shared their experiences and views on the matter as part of the "Sexual Diversity" panel at the 2nd Latin American Conference on Diversity in Journalism sponsored by the Knight Center for Journalism in the Americas, held online September 9-10, 2022.

The panel was moderated by Esteban Hernández, journalist and host of Blu Radio and Caracol TV, in Colombia.

It is necessary to promote these uncomfortable conversations mainly in the hegemonic media of the region, which are the ones that moderate public conversation. But also because they are, on many occasions, the main way in which people come across issues of sexual diversity, Villatoro, who is the learning coordinator for the LGBTI+ initiative of the International Women's Media Foundation (IWMF) in Latin America, said.

"We sometimes forget that many people's first contact with these diverse realities [...] is through the media," Villatoro said. "So the media does have a crucial historical role."

To create change in the narrative on diversity issues in the media, it is necessary that both news oultets and journalists come to terms with a historical debt towards LGBTQ+ populations. Also, that they raise awareness in order to modify practices that have perpetuated erroneous messages around these communities.

"[When dealing with] racism we have seen how the notion of debt has made the media create spaces and remove historically racist practices from the practice of journalism," he said. "Sometimes, not being aware that there is a debt with diversity makes the media believe they can go on like that. I think there is also something to be done to raise awareness.”

Not all countries in the region have state institutions that look after the welfare of LGBTQ+ populations, as they exist for other vulnerable groups, such as Indigenous people, women or migrants.

This translates into a lack of legal frameworks and public policies on diversity issues. But, above all, into a lack of information and official sources to which journalists can turn for their stories. Given this reality, journalists should use their coverage to raise complaints about those gaps in public institutions, Villatoro said.

"A lot of our work is sometimes to point out those gaps. And I think that, especially in diversity, sometimes it is necessary [...] for there to be active denunciation and not just reporting on what is happening," he said. "Many times, when we are talking about historical exclusion of populations in vulnerable conditions, what we are going to find is purely debts, gaps. And sometimes we don't know how to turn gaps into good stories, as when something does happen."

Geo González, journalist and trans person, lamented that many journalists in the region do not receive sufficient training on how to cover LGBTQ+ issues. Therefore, he agreed that it is journalists themselves who must resort to self-reflection and asking uncomfortable questions in order to have better practices and approaches to stories about sexually diverse people.

"I think it's vital, as a first step, to listen. And beyond that, also to allow ourselves to enter an uncomfortable place among ourselves to deconstruct ourselves. Also to understand where we stand, from what vantage point we see the world, what privileges intersect us and also what identities intersect us at the same time as people," González, who contributes from Mexico for Agencia Presentes, a news organization based in Buenos Aires that covers issues related to LGBTQ+ rights and human rights with a gender focus, said.

González recommended removing the "veil of stereotypes and stigmas" when approaching issues of sexual diversity and chosing instead a human rights approach. The journalist also said that stories with a vision of hope should be privileged and not be limited to tragic and painful coverage that equates news about LGBTQ+ people with hate crimes or prejudice.

"To tell [LGBTQ+ stories] following best practices is to have a human rights vision about lives, stories and what becomes news when it intersects LGBTQ+ people," González said. "Bad practices would be everything that generates, starting with language, discourses that are used in journalism — the image, the video, the audios, the written word — to reproduce stereotypes, to criminalize identities, individuals and populations."

Speaking from a place of hope, González said, has to do with thinking of LGBTQ+ people as individuals who contribute to society, who can have expertise in different areas and thus add to journalistic stories. This can contribute to normalizing their existence in areas of society outside of those related to sexual diversity.

González invited fellow journalists to overcome their fear to join in covering LGBTQ+ issues to counter the hate narratives prevalent in Latin America. 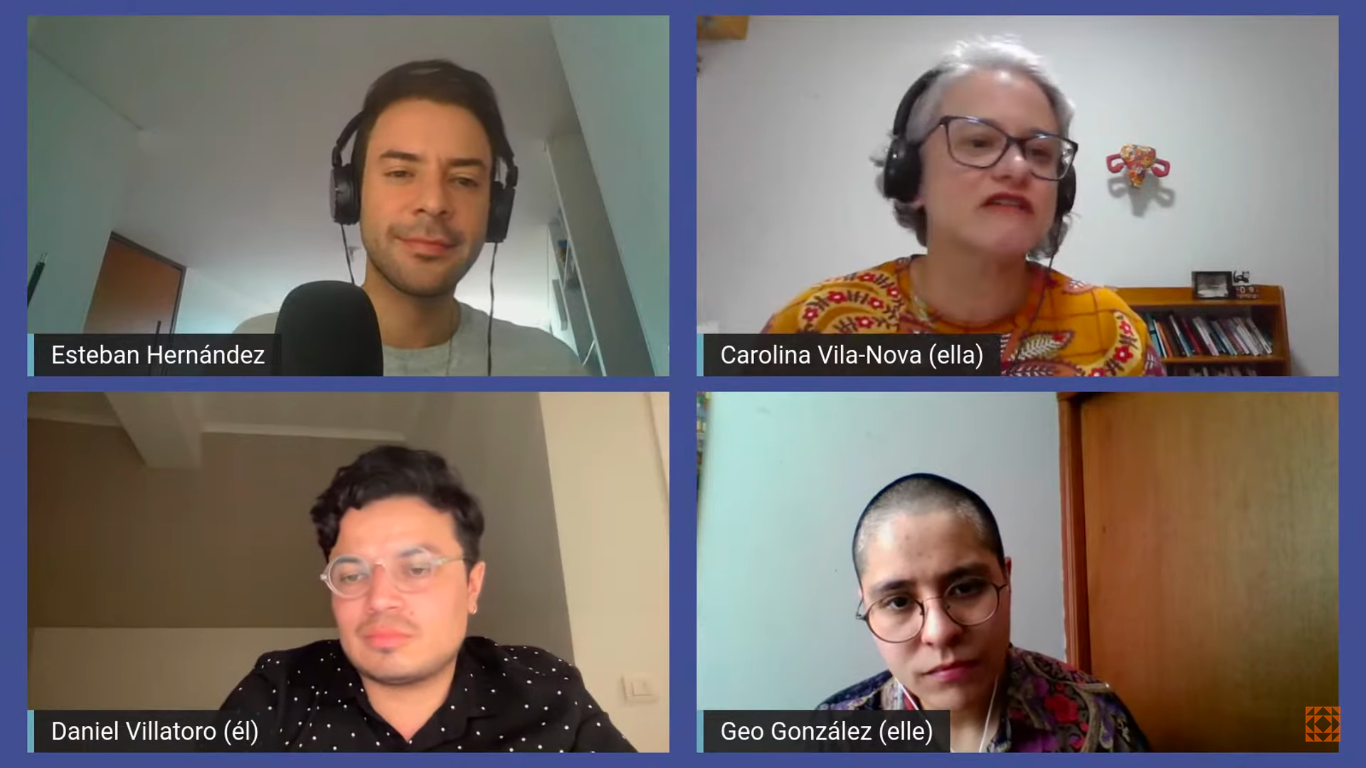 The panel on Sexual Diversity was held online on Sept. 9. (Photo: Screenshot)

"This is an invitation to put ourselves in an uncomfortable place, if that's the way it has to be," Gonzalez said. "We are in a moment, particularly in the region, where we have a wave of hate speech. I think journalism offers great possibilities to totally change those narratives and one of those is not to continue advocating for pain from a place of morbidity."

Carolina Vila-Nova, a journalist at Folha de S.Paulo, said that these uncomfortable conversations should also serve to question who holds positions of power in newsrooms, as this is directly reflected in their editorial coverage.

For this reason, the Brazilian journalist considers that one of the main challenges for the media is to change their management structures and organizational culture. Vila-Nova took the example of the newspaper Folha de S.Paulo. Although there is a certain gender parity in its structure that has been consolidated in recent years, the top positions are still held by cisgender men.

Those changes in media structures, Vila-Nova said, will inevitably impact the way women are looked at in news coverage.

"It takes a collective change in the way we look at women. From the choice of topics to the sources we're going to hear from, to the photographs we're going to use to represent those women we're talking about," she said.

Vila-Nova is the coordinator of the “Projeto Leitoras,” an initiative of Folha de S. Paulo launched in February this year to improve the newspaper's interaction with its female audience and give visibility to their demands in their daily coverage.

The group's dynamics include discussion groups via WhatsApp in which various topics of interest to female readers are addressed with the support of specialists. To date, these groups have brought together more than 130 women.

The initiative, said Vila-Nova, arose after several surveys of women readers showed that they saw Folha as a newspaper by men for men, sometimes even sexist and misogynist, in which they did not see themselves represented.

Despite the fact that this initiative has been well-received, Vila-Nova would like to improve its representativeness and broaden its scope to women from other sectors of Brazilian society. However, she said that the main lesson learned from "Projeto Leitoras" is the importance of listening directly to the populations to be represented and including their demands in the media's coverage plans.

"When you start from the idea of listening to people, you must realize there’s a lot of responsibility with what we make of what we hear," she said. "We can't take this rich material and throw it away, or treat it in a way that is not respectful to the audience."

The moderator, Esteban Hernández, said the situation of women’s presence in positions of power in the media is similar in Colombia, where there is also a strong context of machismo and religiosity.

"You can look at statistics and say you have a number of women working in a news outlet, but how many of them are directing a show? How many are in an editorial management position? How many are actually making decisions?," he said. "There is still, as it happens here in Colombia as well, a strong machismo that you have to defeat and have the uncomfortable conversations."

Tips to improve the coverage of women's and LGBTQ+ issues

The members of the Sexual Diversity panel of the 2nd Latin American Conference on Diversity in Journalism shared some best practices to improve coverage of women's and sexual diversity issues.

1. Make a directory of sources based on their identities

Daniel Villatoro suggested building an alternative directory of sources for sexual diversity issues, in which instead of taking into account their profession or the institution they belong to, their identities are considered the main criterion.

"In migration issues and in diversity issues it matters a lot what the identities of these people are," he said. "It gives you the contextual framework you need to interpret the information [that source] is going to give you."

2. Strengthening the human rights approach in the coverage of trans persons

Geo González called to avoid perpetuating the criminalization and stereotypes surrounding the trans population in journalism. To this end, González recommended adopting a human rights perspective.

"I think it is important to report violence, but I believe that it should always be from a human rights perspective. It has to do with [telling] what rights are being violated for this person and for this population in this case of violence, which is not an isolated event," González said.

3. Consider the nature of each news outlet when reporting on diversity

Although it is important to always take into account the focus on human rights, Villatoro said it is necessary to consider the strengths of each news outlet to better cover sexual diversity issues.

"Each news outlet has its own way of doing things and I have very good examples of how free printed media they pass on the street can make a sensitive coverage of LGBTQ+ issues [...]. But radio also has a different conversational and testimonial capacity," Villatoro said. "You also have to enter into the very formula of your medium and what is the potential of the medium you are in to enter into this conversation."

4. Listening to the audience with your heart

Carolina Vila-Nova said that attending to the demands of audience representation in a news outlet must be an exercise in listening attentively to that audience. This is the only way it’ll be possible to modify the necessary editorial approaches.

"Listen to what people have to say. Listen with your ears and your heart, because change is necessary and possible," Vila-Nova said.