What's next? Some ideas for boosting diversity in journalism in Latin America

The closing session of the Second Latin American Conference on Diversity in Journalism took stock of the ideas discussed during the event and planted the seed for creating a future continental organization to promote the concepts of diversity, equity and inclusion in journalism in Latin America.

"This is what we wanted to bring up at the end of the conference: to formalize this collaboration, in the sense that we are interested in creating a network. We are inspired to join forces, to integrate our efforts and we hope to be able to share with you a web page that we are already working on," Mariana Alvarado, a Mexican journalist and coordinator of the conference, said.

The central goal of the network to be formed will be to continue to boost education on issues of diversity, equity and inclusion (DEI) in journalism.

"Diversity, equity of inclusion is not a trendy issue. It's an issue that is relevant, that we have to take into consideration as journalists. It is our duty to represent all, everyone, all groups that are in the communities we cover," Alvarado said.

The need to educate journalists and their audiences about DEI is one of the conclusions that emerged at the end of the conference. According to journalist Andrea Medina, director of Integrados Chile, the theme of education was present in all panels.

María Teresa Juárez, a Mexican screenwriter and journalist, argued for Latin American journalists to get involved in the DEI "wave." She said it is a global movement that is here to stay. She said there are many issues yet to be covered and questions to be solved in matters such as terminology, approach, focus and narrative. Moreover, there is a growing restlessness in large, small, digital native and commercial media to start or reformulate DEI narratives in their newsrooms.

“This opens up a universe of possibilities that excites us and, at the same time, presents a challenge. Within language, which is the raw material of what we do, journalism can put into practice in a very clear way these changes. These are global expressions being transformed in light of different movements. I believe they are already an established trend,” Juárez said.

Pilar Cuartas, a journalist from the Pontificia Universidad Javeriana and a lawyer from the Universidad Libre, said that the second edition of the conference allowed to create a space for connection and knowledge sharing around the DEI theme among journalists from Latin America, opening doors for collaborations at a continental level.

“I believe these collective efforts, being able to meet other people, share experiences, share the same questions and discuss them is wonderful. It has been an incredible experience because it has also forced me to search and try to find answers. I believe not all the answers are there yet, but the conversation is happening in Latin America. We have come to realize there are many news outlets that are working on diversity, equity and inclusion,” Cuartas said. 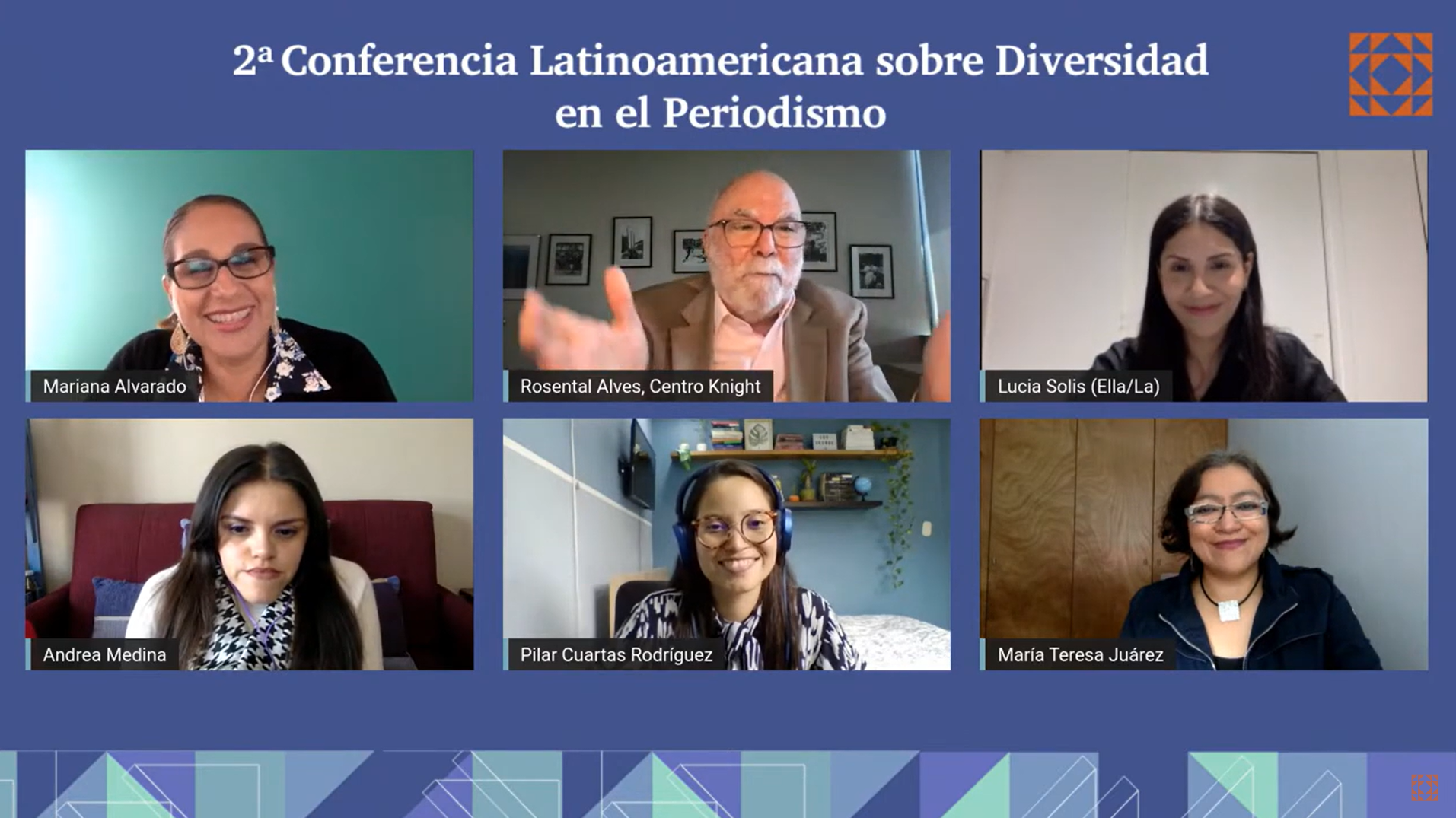 Participants in the closing session of the Second Latin American Conference on Diversity in Journalism. (Credit: Screenshot)

For Lucía Solís, a journalist and feminist, the wide interest that the conference and the Knight Center's recent activities around the DEI theme — such as the MOOC "Diversity in the news and newsrooms" and the launch of the e-book "Diversity in Latin American journalism" — have awakened in Latin American journalists made her realize that she is not alone in her motivation to fight for a more diverse journalism.

“For me, to be part of this family has not only been an honor, but also a milestone in my career. To realize that I am not alone, but there are many people who want to articulate precisely this motivation I personally have from my journalistic work and that much more can be done,” Solís said.

Professor Rosental Calmon Alves, founder and director of the Knight Center for Journalism in the Americas, recalled that the organization has extensive experience in empowering Latin American journalists who want to organize themselves. He made himself available to help in the initial structuring of a network of journalists interested in DEI.

“Now is the time to encourage collaboration and to empower interested journalists,” Alves said. “Perhaps next year, this network will host the third Latin American Conference on Diversity in Journalism.”