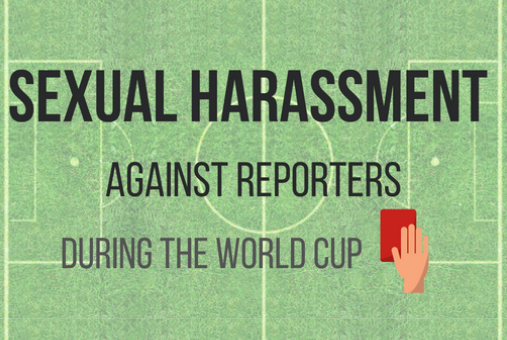 The first day of the soccer World Cup, which this year takes place in Russia, has yielded one of the most regrettable moments of news coverage of the event to date.

Several communication professionals in Honduras have denounced the theft of their belongings, as well as persecution and threats by the country’s armed forces, in the days following the controversial presidential elections held in the Central American country, according to the Committee for Free Expression (C-Libre).

If you are a woman working in a newsroom, the above accounts may seem familiar. They were collected during focus groups for the report "Women in Brazilian Journalism," produced in partnership between the Brazilian Association of Investigative Journalism (Abraji, for its acronym in Portuguese) and the journalism site Gênero e Número. The results indicate that 70.4 percent of the women who answered the online survey said someone had made a pass at them at work that made them feel uncomfortable. Another 70.2 percent reported having seen or heard of harassment of colleagues in the workplace.

Bolivian journalist Yadira Peláez, who accused Carlos Flores, a former manager of state-owned Bolivia TV, of sexual harassment, is being sued for economic damage to BTV in a complaint filed by the channel's management, according to El Deber.

Bolivian journalist Yadira Peláez took matters into her own hands after she apparently felt an investigation into her complaint of sexual harassment was going nowhere.

After threats and harassment, Mexican journalist leaves the state of Veracruz

Threats and abuse against Noé Zavaleta led the Mexican journalist to leave the state of Veracruz on Aug. 12, according to Aristegui Noticias.

Update (July 1, 2016): The legal processes and hearings against the Brazilian newspaper Gazeta do Povo were temporarily suspended on June 30 by a judge of the Federal Supreme Court, Rosa Weber, according to O Estado de S. Paulo.

Brazilian journalists launch campaign against harassment in the profession

Last week, Brazilian journalists released the campaign Journalists against Harassment in order to denounce cases of harassment against media professionals and to raise public awareness about the issue. The campaign was created after the firing of a reporter who had reported having suffered sexual harassment during an interview with a Brazilian musician.

The six Ecuadorian journalists who participated in the global investigation known as the Panama Papers have been the subject of a “campaign of genuine harassment,” as denounced by the nonprofit organization Fundamedios.

After harassing traditional media in Ecuador, Correa and his followers focus on digital media

The conflict that the President of Ecuador, Rafael Correa, has with the majority of media in his country is no secret. Since approving the Organic Law of Communication (LOC by its initials in Spanish) in 2013, different national and international organizations have denounced its restrictions on freedom of speech and press freedoms in the country.