Venezuelan daily Panorama, founded in 1914 and based in the northwestern state of Zulia, published its last print edition on May 14. 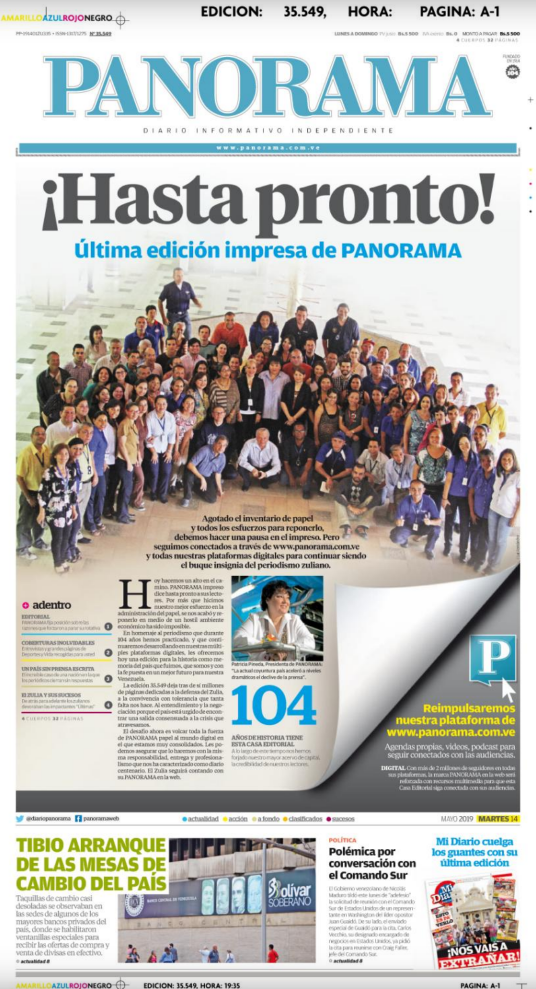 The cover of the last print edition of newspaper Panorama, located in the state of Zulia. (Screenshot)

It is the 67th newspaper to end its print offering, either temporarily or permanently, between 2013 and 2019, according to IPYS Venezuela. Zulia joins three other Venezuelan states which no longer have a print publication, the press freedom organization added.

In an editorial published in the final print edition, Panorama said it had problems finding foreign currency to purchase imported printing materials and also suffered from the country’s economic crisis, government-mandated salary increases they couldn’t afford and decreases in advertising revenue.

After cutting various sections and products, it said it ran out of paper.

“International providers cut the line of credit for Venezuela years ago because of the risk of not receiving payment,” it explained. “The Editorial Complex Alfredo Maneiro (Ceam), whose mission is to provide consumables to media, does not have reels that fit our press (an answer that we only got a few weeks ago after successive attempts that began more than four years ago).”

Ceam is a state-owned company that has been accused of withholding newsprint as a way to censor media.

Panorama also outlined the everyday struggles imposed on its employees by the current crisis, including cuts to electricity.

“We have lived a long and constant replacement of human talents that leave in search of better life opportunities. And those who have stayed make miracles to get to their jobs, because there is no decent public transportation to do it or they do not have water in their homes to go out to work,” the editorial read. “Once here, they must face the odyssey of chasing news in the desolate streets of a depressed city and they do it, in turn, with an exhausted fleet of vehicles that languish each day in endless queues to stock up on gasoline, or wait for spare parts that never appear.”

Panorama, which said it published 35,548 editions over the course of its history, said it will now turn to its digital product and social media accounts, like many other newspapers in the country.

For the future, it made a “call for national understanding” and urged the unification of Venezuelans. It also called for free and credible elections.

“We have the duty to rebuild this nation from the cataclysm to which we have led it with intolerance, dogmatism and the abuse of power,” it wrote. “That the civility and that peaceful vocation that we exhibited before each historical test guide us to get out of this quagmire and to reunite ourselves as brothers.”

The 12-year-old Mi Diario, whose parent company is Panorama, also ended its print edition due to lack of paper, as reported by freedom of expression organization Espacio Público.

*This story was updated to include that Mi Diario, part of the Panorama company, also ended its print edition.