The government of the Mexican state of Jalisco has raised an alert among freedom of expression defense organizations in recent days due to recent acts of attacks and harassment on journalists and media in the state.

In the month of December alone, the Article 19 organization issued three alerts for cases of violence against journalists and media in the state, two of them directly related to Governor Enrique Alfaro.

On Dec. 8, journalist Rocío López Fonseca from Channel 44 of the University of Guadalajara was interrupted by governor Alfaro while trying to interview the local health secretary about the supply shortage in health institutions. Alfaro intervened and ordered to stop the interviews of those who, he said, come to “burst” (boycott) public events.

According to Article 19, the reporter had previously attempted to question the Governor about the lack of medical supplies, to which he had refused. In a statement, the organization described the governor's statements as attempts to stigmatize and criminalize journalistic work. 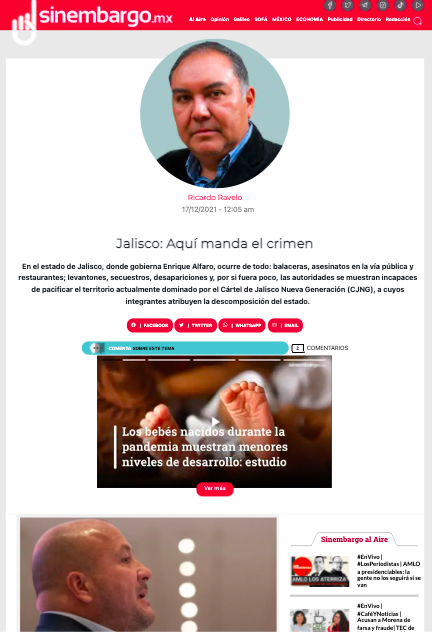 Two articles by Ravelo provoked a reaction from the Governor of Jalisco. (Photo: Screenshot)

On the 27th of the same month, the governor announced that he had filed a lawsuit for moral damages and had requested precautionary measures against Journalist Ricardo Ravelo Galo, who days before had published a couple of articles on an investigation into organized crime in Jalisco.

In the investigation, Ravelo describes the alleged protection by the Alfaro administration of a criminal group and shows the alleged participation of people close to the governor in a criminal organization.

A day later, Article 19 spoke out against the governor's threats to take legal action against Ravelo and said that this undermines freedom of expression and seeks to limit criticism of the authorities.

“Yes, it is an issue that the governor of Jalisco has resorted to this type of actions and intimidation, even threats, and using the institutions. We believe that it is a warning sign that he wants to censor the press, even using the institutions themselves," Edgardo Calderón, defense coordinator for Article 19, told LatAm Journalism Review.

In July 2018, before taking office as governor, Alfaro managed to get the electoral authority of the state of Jalisco to order the Aristegui Noticias news outlet to suspend the dissemination of an article by journalist Anabel Hernández, in which it was mentioned that the then-elected governor was under investigation in the United States for ties to drug trafficking.

The precautionary measure was rejected five months later, however the article had already stopped circulating.

"Even worse is the use of judicial and/or administrative institutions to cause this censorship, even abusing things such as 'precautionary measures' to try to eliminate news articles immediately and without resolving the background legal processes," Article 19 said when it took a stance on Dec. 28.

Mexico’s President, Andrés Manuel López Obrador, offered protection to Ravelo and asked the undersecretary of the Interior to contact him. The journalist later said, in an interview with journalist Julio Astillero, that he had filed a complaint concerning Alfaro's actions before the National Human Rights Commission of Mexico (CNDH) and that he was already under the Protection Mechanism for Human Rights Defenders and Journalists of the Ministry of the Interior.

However, Ravelo said he did not rule out leaving the country in the face of Alfaro's threats. Through his social networks, the journalist held the governor responsible for what could happen to him and said he had proof of the sources of his journalistic work to respond to the alleged lawsuit, of which he has not been notified.

“The courts in civil matters were on holiday. It is unknown if such a demand exists, because courts are only available for urgent cases,” Calderón said to LJR. He said that Article 19 is in constant communication with both Ravelo and López Fonseca. "For the time being, the reporter has not been notified of any lawsuit, complaint or administrative complaint, so far there is no record of any legal action."

On the afternoon of Dec. 28, armed individuals tried to enter the facilities of the University Radio, Television and Cinematography System of the University of Guadalajara, where the transmitting antennas of various radio and television networks are located, including those of Channel 44. Two security guards were killed. The attacks came a day after the channel interviewed Ravelo and publicized the governor's actions against him widely. 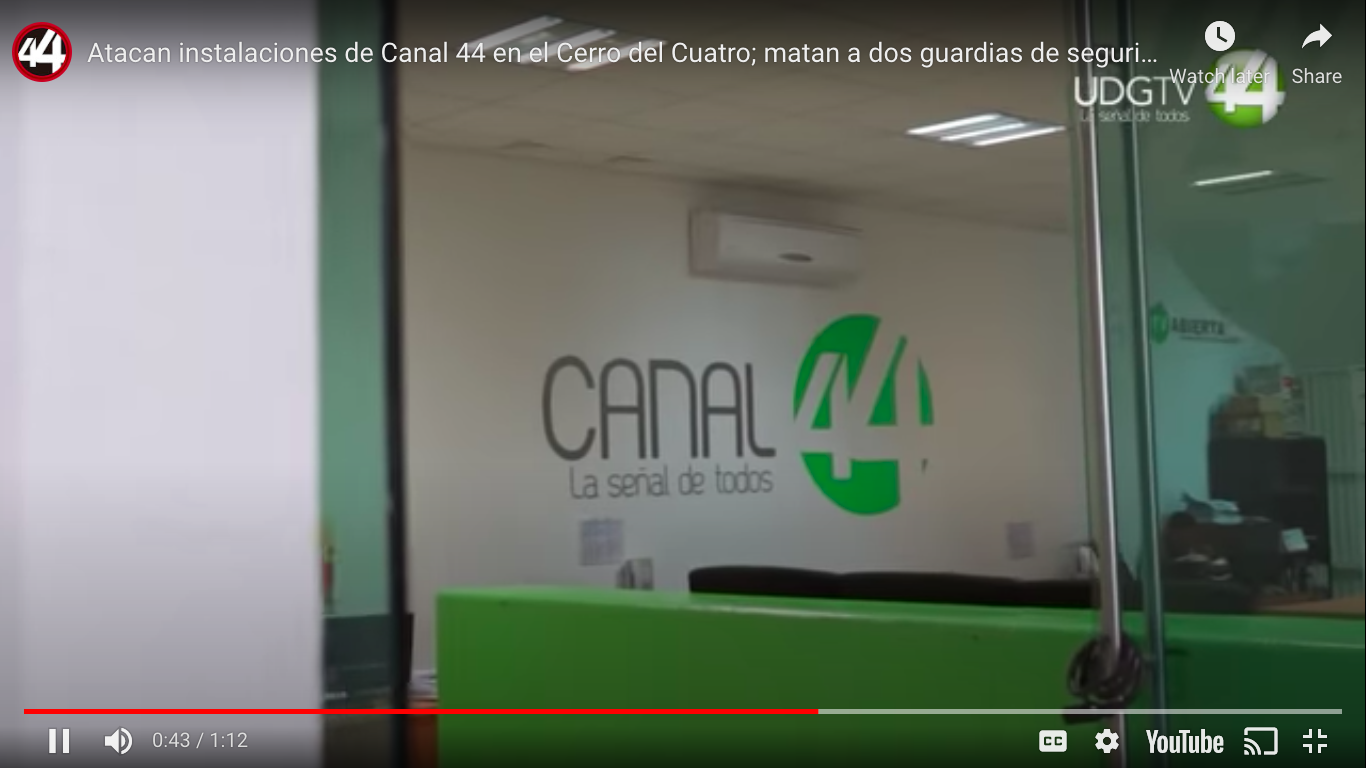 The facilities of Channel 44 of the University of Guadalajara were attacked by armed individuals. (Photo: Screenshot)

The organization Reporters Without Borders and Article 19 condemned the events in a joint statement and criticized the statement in which the Attorney General of the State of Jalisco assumed that the attacks were directed at the security guards and not at media, without having initiated an investigation.

"It is worrying [...] that the Prosecutor's Office issues said position in less than 24 hours without considering the media outlet as a line of investigation, since it de facto dismisses the media's informational work," the organizations said in their alert. "It is imperative that the attack against Channel 44 be investigated considering its journalistic work as the main axis."

Article 19 clarified that they continue to document and analyze whether the attacks on the news outlet facilities are linked to Governor Alfaro's statements or to coverage of the Ravelo case.

​​The United Nations Organization for Human Rights (UN-HR) condemned the attacks and called on the authorities to clarify the case. For its part, the CNDH requested precautionary measures from federal and Jalisco authorities to safeguard the security of Channel 44 personnel.

In 2021, at least 24 attacks on journalists by government authorities and individuals were registered in Jalisco, according to the recently created Observatory on Freedom of Expression and Violence against Journalists of the University of Guadalajara.

Ricardo Ravelo has experience in documenting the links of Mexican authorities with organized crime. In 2021 he published the book "Los Narcopoliticos," in which he exposes the criminal ties of governors and political figures. His investigation into the governor of Jalisco was not included in his most recent book because he learned about the case after the edition was printed, according to him in an interview for the RegeneraciónMX portal.

But Ravelo is not the first communicator to receive threats or legal harassment from Mexican authorities after the publication of journalistic investigation books. In 2005, Manuel Bribiesca Sahagún, eldest son of the then First Lady of Mexico, sued Argentine journalist Olga Wornat for moral damages for mentioning in her book "Crónicas Malditas" the alleged illicit enrichment of Sahagún's children.

In 2018, the former governor of the State of Mexico Eruviel Ávila sued journalist Humberto Padgett for moral damages for a text published in the book "Los Suspirantes 2018," in which he mentions alleged sexual misconduct by Ávila with underage men.

One of the most emblematic cases in Mexico is that of journalist Lydia Cacho, who in 2005 was detained and tortured by police from the state of Puebla, after being accused by then-Governor Mario Marín of defamation and slander. The accusations arose as a result of the publication of the book "Los Demonios del Edén", in which Cacho denounced the existence of a network of child sexual exploitation in which Mexican businessmen and politicians were involved.

“We definitely see a trend there. [...] The reaction of the governor [of Jalisco] leaves much to be desired. One can see the intolerance there," said Edgardo Calderón. “It is similar to the issue, for example, of Lidia Cacho or Anabel Hernández, who has also been sued by the very same governor. Yes, it’s a trend and it’s a reaction that reflects intolerance and censorship in the face of these issues.”