At a time of worsening press freedom in Brazil, at least 15 legislative bills seek to protect media professionals from attacks. Among them, there are proposals to consider as heinous crimes against journalists, to federalize the investigation of these crimes, to toughen penalties of bodily injury and homicides and even to classify the harassment of press professionals as a crime. With the 15 bills, there are eight parties represented by the authors, including Bolsonaro's former party.

Twelve of these projects were presented in the last two years, that is, during the administration of President Jair Bolsonaro, whose anti-journalism rhetoric is perceived as a risk for communication professionals.

During this period, cases of physical and digital violence grew, according to organizations such as the Brazilian Association of Investigative Journalism (ABRAJI, for its acronym in Portuguese). The National Federation of Journalists (FENAJ) recorded at least one daily attack by Bolsonaro on journalists and media outlets in 2020.

Most of the proposals (11) toughen penalties for crimes already in the penal code, such as aggression and homicide, when the victim is a journalist carrying out their work. There are also two bills that establish rules for the participation of the Federal Police in investigating crimes against journalists. These 13 bills were merged into one and are currently in the Chamber's Constitution and Justice Commission.

“With so many attacks on journalists, mainly women, it is essential to create a legal framework that guarantees the free exercise of journalism, without which no democracy exists,'' wrote Congresswoman Shéridan Oliveira, author of the proposal, via Twitter. The bill is being processed by the house commissions. 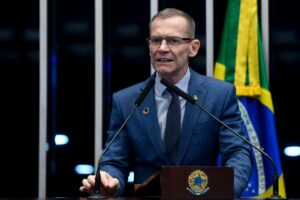 Senator Fabiano Contarato: ‘Criminal law has an educational and symbolic function in demonstrating that society and the State value – and will act to protect – press freedom.” Photo: Marcos Oliveira / Agência Senado

The worsening levels of violence against journalists in Brazil are also one of the justifications Senator Fabiano Contarato used to propose the bill that makes it a crime to harass a journalism professional in the exercise of his function – something common while covering protests, rallies and other public events – and which is often the starting point for physical assaults and other types of attacks.

“Both the Committee to Protect Journalists [CPJ] and the organization Reporters Without Borders place Brazil among the most dangerous countries for journalists. This violence manifests itself in different scenarios: in the coverage of urban protests and conflicts; in the countryside and in small municipalities; and even when dealing with senior officials, like the President of the Republic, who routinely offend and harass journalists,” Contarato told LatAm Journalism Review(LJR).

The bill from the senator, who is in his first term, cites the case of photojournalist Dida Sampaio, from Estadão, attacked with kicks, punches and shoves when covering Bolsonaro's participation in a pro-government demonstration in front of the Planalto Palace.

At the time, the attackers first harassed the photographer and other journalists with shouts of "out Estadão" and "garbage." If the bill becomes law under the current terms, the aggressors would be subject to six months in prison for harassing a press professional and another year for physical assault.

FENAJ has a working group to evaluate the various bills that are in progress in Congress dealing with the issue of violence against journalists. The entity is more concerned, however, with the impunity that aggressors have even with legislation already in force.

“The problem with violence against journalists is not the lack of applicable legislation. In most cases, the aggressors are not even identified. When identified and reported in the criminal sphere, investigations often go nowhere,” FENAJ president Maria José Braga told LJR.

The concern is justified: Brazil is one of the worst countries in cases of impunity for homicides of journalists. According to the 2020 ranking from CPJ, the country ranks eighth – one higher than in the previous year, and two behind Mexico, the most lethal country for journalists in the Western hemisphere.

“The authorities do not investigate, they do not even identify the perpetrators, and often those who ordered the murderers and the killers walk free. So if even homicides are not punished, I don't know if this type of crime would have better results,” Marcelo Träsel, president of ABRAJI, told LJR.

Despite skepticism, the president of ABRAJI considers it commendable that parliamentarians are concerned about the safety of journalists.

“We are increasingly exposed to aggression, hostility on social media or in-person. We are increasingly prevented from doing our job. So it's very good that Congress is addressing this problem and trying to find solutions,” Träsel said.

Now Contarato, who before taking a seat in the Senate was a police deputy, argues that the police and judicial authorities should use more resources to investigate crimes against journalists in general, in particular cases of murder and serious violence.

"Criminal law has a dissuasive function in demonstrating, for those who eventually intend to commit these crimes, the gravity of the sentence that awaits them," the senator said. "It has an educational and symbolic function in demonstrating that society and the State value – and will act to protect – a good, a right or a freedom, such as freedom of the press."