Carlos Dada never wanted to be the story.

For Dada, the ties between El Salvador’s government and the country’s notorious gangs are the stories worth telling. As are the “nightmare” journeys many Salvadorans have undertaken to immigrate to the U.S, and the pervasive corruption in the government.

Dada and his team at El Faro (“The Lighthouse,” in English) have illuminated the dark corners of his country and surrounding region since he co-founded the outlet — the first digital-only media initiative in Latin America — with entrepreneur Jorge Simán in 1998. For doing so, they have drawn the ire of an increasingly authoritarian Salvadoran government.

“It's not ideal for any journalist to become the story. We write stories. We investigate stories. We are not the stories,” Dada said. However, last January it was revealed that the current presidential administration of Nayib Bukele had been monitoring El Faro reporters using Pegasus spyware for over a year, from June 2020 to November 2021. “Suddenly, we became the story. And that has demanded a lot of resources.”

Dada and his team had been followed before, and had their conversations tapped, he explained. But the Pegasus revelations were a bridge too far. “To realize that the people that want to hurt you have pictures of your loved ones, of your family, the chats with your family [...] They didn't need to follow us anymore. They had our geolocation. They had our chats,” Dada said. “They had everything. It crossed a line.”

During El Salvador’s bloody 12-year civil war that left 75,000 dead, Dada lived with his family in exile in Mexico. In the aftermath of the war, which ended in 1992, he began spending summers once again in his native country, before returning for good in 1997. 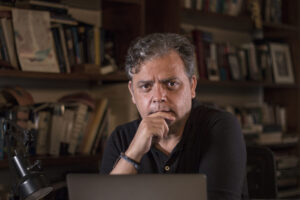 As El Salvador entered its post-war future, Dada and Simán envisioned the critical role a news outlet could play. “It was even more obvious that the new era the country was entering into needed a new kind of media,” Dada said. With this goal in mind, the two launched El Faro a year later.

The newsroom has since made its mark through its renowned, uniquely composed narrative investigations. Reporting in both Spanish and English, El Faro has also published books, documentaries and podcasts.

Among Dada’s more well-known reporting are his investigation into the consequential assassination of Archbishop Oscar Arnulfo Romero, whose death was a breaking point for El Salvador’s descent into civil war, and his deep-dive into the conspiracy behind the killing of six Jesuit priests in 1989. Last year, Dada revealed links between drug traffickers and political leaders in Honduras.

Alongside El Faro reporters based in Mexico, Dada has also spearheaded in-depth reporting on the grim realities of life along migration routes from El Salvador to the U.S. “We understood very quickly that this was a world that we hadn't seen before and that millions of Salvadorans knew,” Dada recalled. “It changed our perspective of why so many people were willing to go through this nightmare, through this hell, to run away from the country.”

The Pegasus revelations epitomize the watchful eye Dada and his colleagues have been under for years because of their reporting. Intimidation, too, has been commonplace. “Throughout all these years, we have received all kinds of threats. Threats from drug traffickers. Threats from the police. Threats from gangs. Threats from politicians. Threats from former war criminals,” Dada said.

Salvadoran president Bukele has publicly accused Dada of money laundering, a tactic seen in other authoritarian countries such as neighboring Guatemala, which used similar accusations to recently detain journalist José Rubén Zamora. Bukele and his supporters have also fomented online violence, on Twitter, Facebook and YouTube, against El Faro reporters and their sources, Dada said.

“We'd never faced a situation like the one we're facing now where the threats come from a whole regime,” he said. “When such a powerful person or group in power declares you their enemy, it means they have the power to use all the institutionality of the state against you. There's not many ways to defend yourself. They have proved over and over again how much they want to silence us.”

In April of this year, El Salvador passed a law that criminalizes reporting on gangs, with a penalty of up to 15 years in prison. It’s known colloquially as the “El Faro Law,” Dada noted — a reprisal for the newsroom’s reporting on negotiations between the country’s major political parties and the gangs for electoral support. The law has pushed El Faro’s newsroom into semi-exile today, with reporters regularly moving in and out of the country.

“We have decided that we don't want to be silent,” Dada said. “We have kept publishing, but every time we publish something about [the gangs] we need to take a reporter out of the country, sometimes for months.”

Dada is ICFJ’s 2022 Knight Trailblazer Award winner. In accepting the honor, Dada hopes to draw attention to the work done by fellow journalists in El Salvador and across Central America who have less of a platform than he does.

“This is a moment when we need to shed light on the situation of our colleagues in Central America — especially those who are way less visible,” he said. “This is a time of urgency to many colleagues.”

Dada has received no shortage of international acclaim over the years for his journalism. And yet, it’s hard not to get cynical: across Central America, democracy is weakening in favor of authoritarianism, with independent media caught in the crosshairs.

In the face of democratic backsliding and mounting insecurity in El Salvador, Dada repeated a quote he attributes to El Faro’s executive editor, Óscar Martinez, that keeps him going: “With our work, we make life a little bit more difficult for those bastards, and I think that's good enough.”