Luz Mely Reyes, co-founder and general director of independent Venezuelan news site Efecto Cocuyo, is one of four women journalists to be honored with the 2018 International Press Freedom Awards from the Committee to Protect Journalists (CPJ). 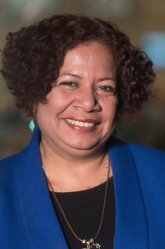 “I feel very honored. Thank you to CPJ for looking to Venezuela. This recognition is for all the Venezuelan journalists who are doing our jobs in the most adverse circumstances,” Reyes told the Knight Center.

Reyes has been an investigative reporter for more than 25 years. She worked at Venezuelan media groups Cadena Capriles and Bloque De Armas for 12 years, serving as a political editor, head of the investigative unit at Últimas Noticias and editor-in-chief of Diario 2001.

She and colleagues Laura Weffer and Josefina Ruggiero created digital news site Efecto Cocuyo in 2015 to provide independent news that did not answer to powers that were working to censor media in the country.

To launch the site, they took to the streets to raise money and listen to the community about the topics they wanted covered.

“We were inspired by this effect of the cocuyo [firefly] to be a tiny spark or light that together can illuminate an entire nation,” Reyes said at the 2017 International Symposium on Online Journalism (ISOJ), when speaking about accountability journalism in polarized societies.

In addition to daily coverage of politics, the economy, crime, and sports, the site produces investigative work on topics like medicine and food shortages in the country and violent deaths due to firearms.

“Venezuela has become an increasingly hostile environment for the press, with journalists facing censorship, limited resources and threats of physical and digital attacks. Throughout her career, Luz Mely Reyes has been an inspiring example of how Venezuela's independent journalists continue to persevere and do great work even in the midst of such a challenging environment,” Natalia Southwick, CPJ’s Americas Researcher, told the Knight Center. “CPJ is thrilled to give this award to such an outstanding representative of courageous, innovative reporting in Latin America.”

Reyes is the sole recipient of the CPJ press freedom award from Latin America this year. The other honorees are: Amal Khalifa Idris Habbani of Sudan; Nguyen Ngoc Nhu Quynh of Vietnam; and Anastasiya Stanko of Ukraine. Maria Ressa, founder, CEO and executive editor of Rappler from the Phillipines, will receive the Gwen Ifill Press Freedom Award.

The winners will be honored at the CPJ annual award and benefit dinner in New York City on Nov. 20, 2018.

“I give special recognition to the people who have supported us during these three years. Without their support, doing our job would have been much more difficult,” Reyes told the Knight Center. “And hugs to my partners Laura Weffer and Josefina Ruggiero as well as the team of Efecto Cocuyo. Each member of this team gives me the strength to continue.”