News outlets from Latin America had an outstanding participation in the Collab Challenges 2021 global initiative, in which they developed collaborative projects based on artificial intelligence (AI). They are contributing to spreading knowledge about AI in their newsrooms and in their regions.

Collab Challenges was an experiment that brought together news organizations from around the world to explore innovative solutions to improve journalism through the use of AI technologies. It was organized by JournalismAI, an initiative that promotes the use of artificial intelligence in newsrooms developed by Polis, the journalism think tank of the London School of Economics and Political Science, and supported by the Google News Initiative. 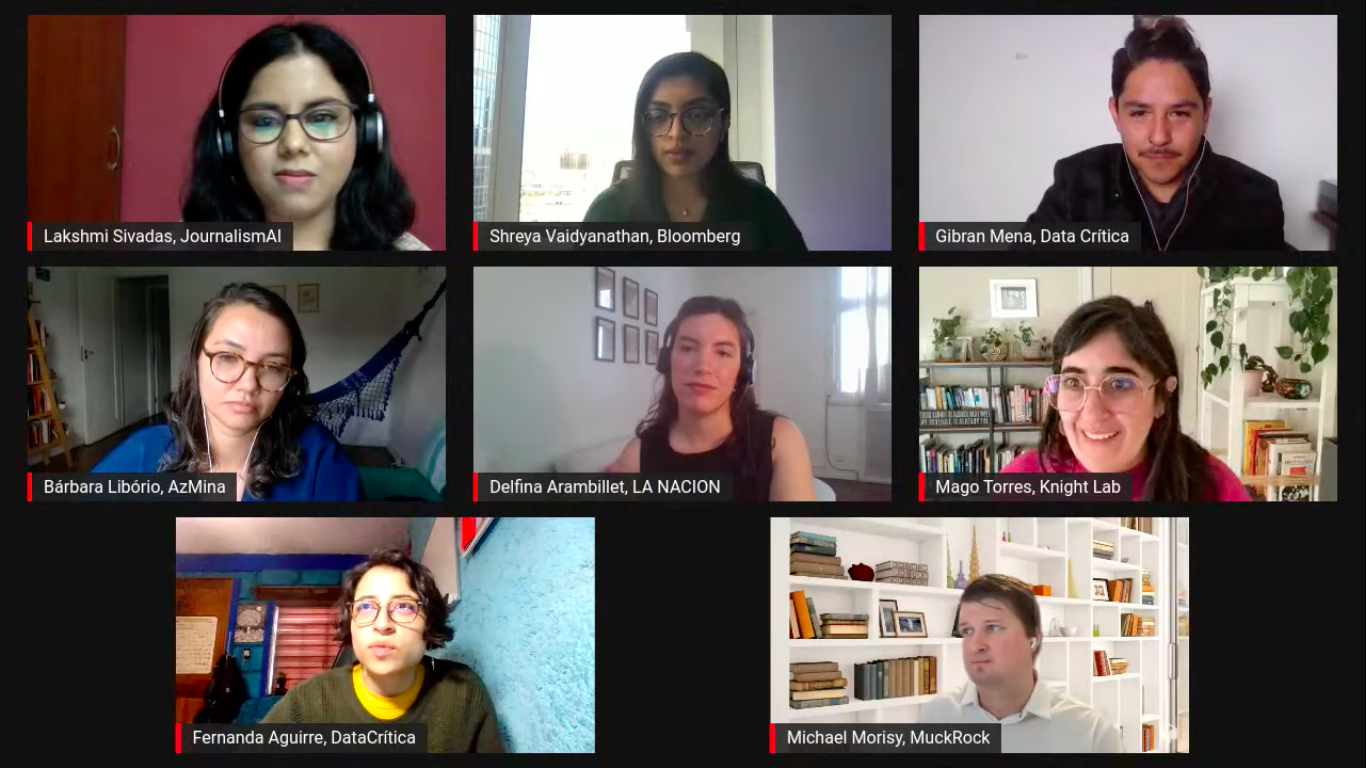 Journalists from the Americas spoke at the JournalismAI Festival about the projects they developed during the Collab Challenges 2021. (Photo: YouTube streaming screenshot)

Subdivided into three teams, the Americas participants developed three projects: DockIns, a machine learning platform to understand and process large amounts of documents; the Political Misogynist Speech Monitor (PMDM), an application and API (application programming interface) that detects hate speech against women on the internet in Spanish and Portuguese; and From Above, a technical guide on how to use artificial intelligence to identify potential stories in satellite imagery.

These projects showed there has been an important development of artificial intelligence within Latin American media. However, journalists in the region still need to introduce the conversation about these technologies to media management, so they’re adopted as part of the regular processes of newsrooms.

According to organizers, “Starting a conversation and collaborating within the newsroom helps a lot in getting AI out of the little bubble that might be usually for the data scientists or the developers of the newsroom, but getting it a bit more even-spread within the culture of the newsroom,” Sabrina Argoub, point person between the Americas team and JournalismAI, told LatAm Journalism Review (LJR). “In the Collab Challenges last year, we were so happy and lucky that we got so many Latin American newsrooms involved.”

Among the main lessons learned by media participants from Latin America is how much culture and language influence the use of artificial intelligence-based tools for journalism.

“Projects like the Misogynistic Monitor, you had to work so much with understanding which words mean what in a specific country in a specific context. So that was just another interesting but also a bit of an obstacle at the time. Because when you work with AI you sort of need to teach that algorithm to recognize certain things that are even hard for us humans to agree upon,” Argoub said. “Both the misogynistic one and the one with DockIns had a big influence in the culture and the language.”

For example, the team behind the Misogynist Political Discourse Monitor found that when talking about Black women, words were used that could be interpreted as misogynistic or racist in other countries, but in Brazil they are everyday and harmless words.

Similarly, the creators of DockIns found that natural language processing (NLP) is not as effective and powerful with content in Spanish and Portuguese, as it is in English.

Each of the regional teams focused their projects on a specific area of journalism. The Americas team focused on investigative journalism and how artificial intelligence tools can strengthen it.

Mago Torres — a specialist in investigative journalism, data journalism and collaborative projects, and who served as project manager of the Americas team — said the projects in this group were focused in one way or another on developing ways to make the processes of journalists more automatic and scalable.

“Each of the projects, with their different themes, is focused on that, on how we collect, process information that helps us better understand the phenomena and events we’re investigating,” Torres told LJR. “But investigative journalism methods are not replaced, because even if we had the most sophisticated algorithm, if we don't know what to ask, what is the point?”

Torres helped facilitate the process of collaboration and experimentation among the Americas subteams. Her role as project manager was only recently introduced for the 2021 edition of the Collab Challenges. Also that of the regional allies, organizations that supported the teams with mentoring and technical resources. In the case of the Americas, the regional partner was the Knight Lab of Northwestern University.

Dividing the participating media by geographical areas also helped coordinate communication and the work according to time zones. Also to find common challenges and needs among newsrooms in each region.

Torres and the Knight Lab also participated, along with the JournalismAI and Polis team, in the selection process of the participating media. One of the criteria considered was whether the organizations applying already had some experience working with artificial intelligence. Organizers were intrigued by the tech experience accumulated by some Latin American media in recent years.

For JournalismAI it was important that there be a balance in the level of experience and knowledge about artificial intelligence among the members of each team. For this reason, at the beginning of the program, the members of each news organization were asked to individually propose the themes or issues they wanted to address, as well as project ideas to solve these issues.

So, for example, the AzMina participants worked together on the Misogynist Political Discourse Monitor; some members of Data Crítica worked in DockIns and others in From Above, while La Nación had participants in all three projects.

“The collaborative part of these types of projects really helped balance any type of difference within the preparation. We took the time to sort of understand the expertise of each individual person, not even just the newsroom,” Argoub said. “When they formed their own teams and decided to work on the projects, we saw that the balance was already there because they all decided to group up in so many different ways. That really helped balance all of the differences that were between the newsrooms.”

At the end of 2021, the projects of all the Collab Challenges teams were presented at the second edition of the JournalismAI Festival, an event organized by Polis that showcases conversations and case studies that explore the intersection of journalism and artificial intelligence. The Americas team discussed their results during a panel on how automated analysis of documents, images, and language can be put to the service of investigative journalism.

Members from each of the three projects talked about different ways to apply and continue developing the tools built throughout the Collab Challenges, as well as the possibilities of collaborating with each other in new artificial intelligence projects.

"Being in collaboration also means meeting people with whom you can work in the future. Each project is generating a seed or already came from another seed but keeps growing, even if it is in a direction not specifically connected with the initial idea," Torres said. “Chatting and working with colleagues who have such different experiences to find common ground seems to me one of the most valuable parts.” 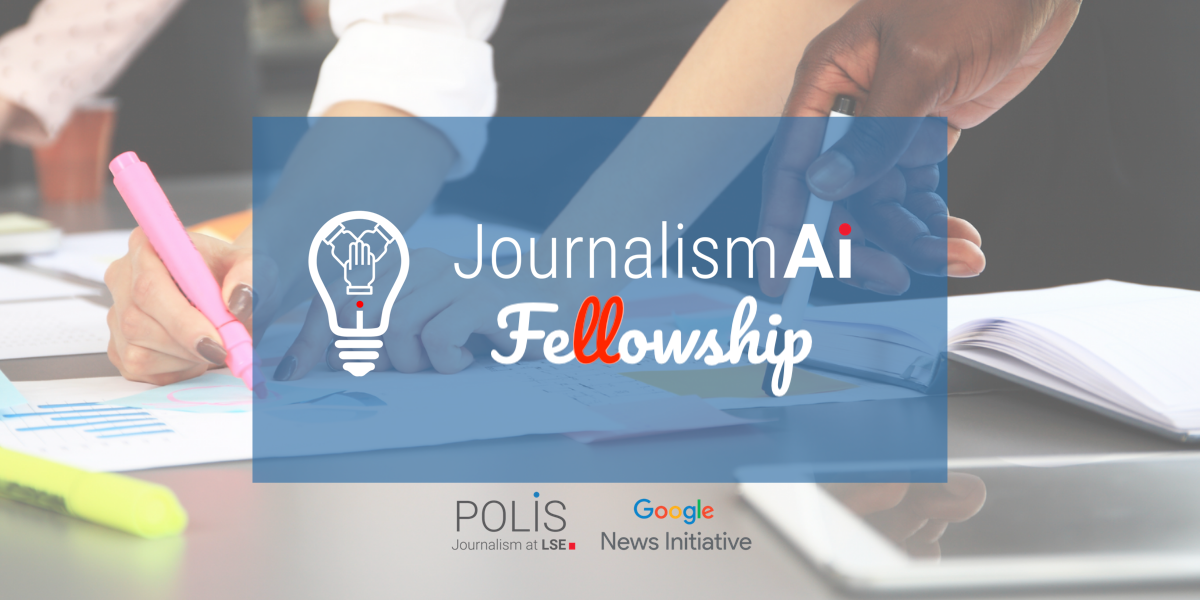 Based on the experiences of the 2020 and 2021 editions, the Collab Challenges this year became the AI Fellowship Programme, again organized by the Polis JournalismAI team and funded by the Google News Initiative.

On April 7, JournalismAI announced that this year they will choose another 20 media workers from the Europe, Asia-Pacific and Americas regions who have experience in artificial intelligence, to develop projects that help empower the scope of journalism.

But, unlike the Collab Challenges, the new program will select two participants from each news outlet, one from the editorial area and another from a technical area of the organization. Each pair will collaborate with another pair from a different news outlet to form a team of four and work together on the same project. In this way,they expect to form five teams of four members, made up of reporters, editors and researchers, as well as developers, web designers and programmers from news organizations.

Each team will receive financial support, as well as mentoring and training from experts in the JournalismAI community. Those interested in the program, which will run from June to December 2022, must apply before May 17.

“The JournalismAI Fellowship Programme aims to produce innovative solutions that can inspire and help others in the industry who may want to pursue similar projects. For this reason, we look favourably at project proposals that can scale and we encourage participants to share not only their final product but especially their learnings, methodologies, obstacles encountered along the way, and ethical considerations,” according to the press release.