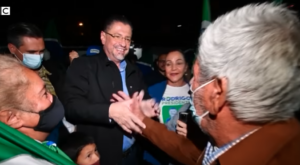 Rodrigo Chaves shaking hands with a supporter at an event. (Credit: Screeshot)

"Feudal lords." "Rats." "Bad people looking to harm this country." Three months into his presidency, the controversial, embattled Rodrigo Chaves has given Costa Ricans an unsparing earful of his feelings toward the press. In that respect, even the leader of the ‘Switzerland of Central America’ is no exception to the Central American rule.

The press has closely followed the administration’s first scandals, including public feuding over his decision to maintain a Covid-19 vaccine mandate and a weekslong Russian ransom cyberattack on government servers that led him to declare a state of emergency two weeks after taking office in May.

The Costa Rican political sphere bristled at press reports during the emergency in May that the president’s chief of staff told government press specialists to limit access to public information. "Don’t see it as censorship, but as extreme discipline," he said, per top newspaper La Nación. One person present in the private meeting where the order was given told the outlet that the chief of staff had called the press the "enemy." The president dismissed the reporting as lies.

But an especially sore spot for Chaves are multiple corruption and misconduct allegations. First, there is the evidence aired in public for months that he paid for various campaign expenditures from side funds, not passing through the legal party financing. If the Supreme Electoral Tribunal finds fault and the Attorney General’s Office decides to indict him, he could later face criminal charges punishable by up to six years in prison.

Next, it’s been said that while he was minister of finance in 2019, Chaves failed to protect investors from a tax scam by financial services firm Grupo Aldesa. A victim of the scam alleged the same for two of his predecessors. Chaves told the press last year that tax authorities did not inform him of the affair, making him unable to duly report it. On June 23 a judge dismissed the allegations.

Lastly, there are reports now under investigation by the Attorney General’s Office that Chaves negotiated the extension through 2031 of the rights to operate Puerto Caldera to a company owned by the son of his campaign manager-turned-advisor Calixto Chaves. In exchange, the company allegedly promised to invest in easing overcrowding at the pacific port.

Chaves fervently denies any wrongdoing. He has called the probes "frivolous and absurd" and argues that in other countries they would constitute an "abuse of process.”

"Most of the acts of public corruption affecting the public have been reported as a result of journalistic investigations," Emma Lizano, former president of the Costa Rican Journalists’ Association, told El Faro English. "It appears that restrictions on access to information have become a trend in this government, as it attacks journalists and deliberately cuts off access to information." 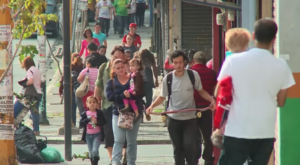 The new head of state has directed particular ire toward the biggest newspaper of the country, the historic La Nación. In July, authorities suspended the operating permit of an event center owned by parent company Grupo Nación that finances the paper, allegedly for obstructing traffic.

In a press conference, the president accused the news outlet and the reporter assigned to Casa Presidencial, Juan Diego Córdoba, of "libeling the homeland" for reporting on the shuttering. Córdoba was also part of the team that exposed the evidence of side campaign financing.

"This isn’t about freedom of expression. It’s a tiny business group that thinks that its name and ancestry entitle it to its every whim and desire," Chaves said. This is akin to Guatemalan prosecutors’ claims this month that a new money laundering case against senior journalist José Rubén Zamora "had nothing to do with his journalistic activity."

Chaves added: "In Costa Rica nobody wears a crown, especially not as long as I, Rodrigo Chaves, am president." The Inter-American Press Association (SIP) condemned the revocation and remarks, recalling his campaign promises to "destroy" La Nación, Canal 7, and others for reporting on sexual harassment allegations and illicit campaign finance. 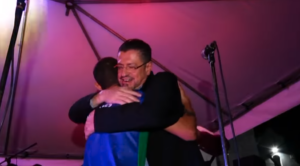 The president had choice words for SIP, too, accusing Grupo Nación of "asking little favors of their partners and friends at [SIP] to defend their shady interests."

Costa Rican political scientist Tatiana Benavides told El Faro English that the hostilities are "part of a strategy to discredit the press in the public eye and to portray  monitoring and questioning as a campaign against him, just like other governments with populist traits in the region." She added: "He has a better attitude toward those who don’t question him."

Perhaps a paradox of the flare-up is that the formerly little-known Chaves capitalized on the support and public image of high-profile former journalist Pilar Cisneros, now a member of the legislature, to build his campaign.

"Press freedom in Costa Rica is in good health. The government will defend it at any cost," Chaves said in July on national television as the Nación affair escalated. "Has a single outlet been closed? A journalist detained? Printing stopped? Obviously not."

"Costa Rica is not the only nation to turn to this tactic," wrote the editorial board of La Nación in July, in reference to Nicaragua, Guatemala, and El Salvador. "Rather, the country arrived late to the phenomenon propelled by social media and troll armies at the beck and call of this region’s rulers."

It’s ironic that Costa Rica remains a haven for journalists exiled from Daniel Ortega’s Nicaragua. Hundreds of journalists have fled the country since 2018. This month the government shuttered Catholic media outlets in Matagalpa. In July, the entire team of historic newspaper La Prensa fled the country, leaving it without print media.

A final aside: On Thursday Costa Rica joined the rest of Central America in approving Nicaragua’s pick for new secretary of the Central American Integration System (SICA). A month ago, we told you how regional leaders have increasingly warmed to the Ortega-Murillo regime.

El Faro editor’s note: This newsletter has been updated to include that at the end of June a judge dismissed the accusations of dereliction of duty in a tax scam case, filed by financial firm Grupo Aldesa against President Chaves.