Cuban independent journalist Yoel Acosta Gámez is one of the first to be fined under Decree-Law 35, which regulates telecommunications services on the island but, in practice, tightens control over the use of the internet and social media. Acosta is a contributor to the audiovisual journalism agency Palenque Visión.

He also received a warning letter "saying that I threatened the sovereignty of the country and also discredited the country with reporting videos made about the situation of people of Baracoa and the poverty, the misery in which they live," Acosta Gámez told Radio Television Marti. 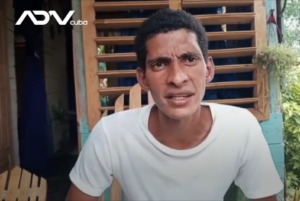 Yoel Acosta Gámez: ‘My message to the communist regime is that we will continue to show the reality of the Cuban people. We are not afraid of being taken to prison’. Photo: ADN Cuba

The journalist and freedom of expression activist was fined 2,000 Cuban pesos (US $83.33) and threatened with imprisonment if he failed to pay. “[The official] tells me that, as of today, they will be aware of everything I do and that I cannot express myself more freely on social networks,” he said to ADN Cuba.

Decree-Law 35 was published in the Official Gazette of Cuba on Aug. 17 to establish the legal framework for telecommunications, information and communication technologies, and the use of the radio spectrum.

The text lists it as a duty of citizens “to prevent telecommunications/ICT services from being used to undermine the Security and Internal Order of the country, to transmit false reports or news.”

The Inter American Press Association classified Decree-Law 35 as a “new thrust against freedom of expression in Cuba...which deepens the control and restrictions on the use of the Internet and social media in the country. The Cuban regime took these measures in response to the social protests that began on July 11.”

At the time of the demonstrations, thousands of citizens took to the streets in more than 60 cities to protest against the lack of available food and medicine. The government reacted by imprisoning journalists, activists and blocking access to the internet.

The new legislation establishes 59 digital security incidents and classifies them according to the level of risk. An incident of “social subversion,” described as “intending to alter the public order, promote social indiscipline,” represents a “very high” level of danger.

This is the same risk classification for natural disasters, such as “earthquakes, floods and hurricanes” that “interrupt or destroy the information technology infrastructure.”

Another two incidents classified as "high level of risk" are related to "spreading false news, offensive messages, defamation with an impact on the country's prestige" or "dissemination ... of content that violates constitutional, social and economic precepts of the State, incite mobilizations or other acts that alter public order.” 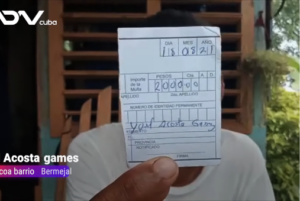 “I think I am one of the first people to whom they have applied Decree-Law 35,” Acosta Gámez told Rádio Televisión Martí. The journalist and activist had already been arrested in May this year, and spent eight days in detention without a formal arrest warrant.

Despite the fine and the threat of another arrest, Acosta Gámez told ADN Cuba that he will continue his journalistic work in the municipality of Baracoa, in the province of Guantanamo, where he lives with his family.