Podcasting is booming and studies show that the podcasting industry will continue to grow rapidly in the coming years.

It is estimated that 2022 will close with two billion dollars generated by advertising in podcast productions, and that this figure will double by 2024, according to the annual report of the Interactive Advertising Bureau of the United States and the consulting firm PricewaterhouseCoopers, published last May. In addition, in September of this year Spotify announced that podcast consumption grew 106 percent in one year in Spain.

Journalism has gradually been riding the podcast boom. Although news podcasts are not the most listened to in Latin America, investigative journalism offers great opportunities in the documentary narrative podcast category. However, creators must be willing to adapt and take advantage of this format’s characteristics, according to several experts in the region.

According to several surveys, investigative journalistic content and documentaries are among the favorite topics of Spanish-language podcast consumers. The EncuestaPod 2022 survey, prepared by the Podcaster@s organization, indicated that 40 percent of the people consulted mentioned "Investigative Journalism" as one of their favorite podcast topics, which places this category in first place, followed by "History" (with 38 percent) and "Comedy/Humor" (with 37 percent). In fourth place, with 29 percent, was "Political Analysis," a genre commonly carried out by journalists.

The "News" category, which refers mainly to "daily news" style podcasts, ranked seventh out of 22 categories measured by the survey. EncuestaPod considered responses of 2,213 active podcast listeners from 40 countries in the Americas and Europe. Some questions, such as the one mentioned above, allowed for several answers.

"There are podcasts that are journalistic but are not news, because they are not so tied to new developments happening at the moment," Mariana Vaccaro, editor of Podcaster@s and an analyst for EncuestaPod, told LatAm Journalism Review (LJR). "At one point there were many podcasts emulating in some way the format that Radio Ambulante had initiated, that of a narrative chronicle in audio. From that perspective, I am not surprised that ['Investigative Journalism'] is one of the most listened to topics." 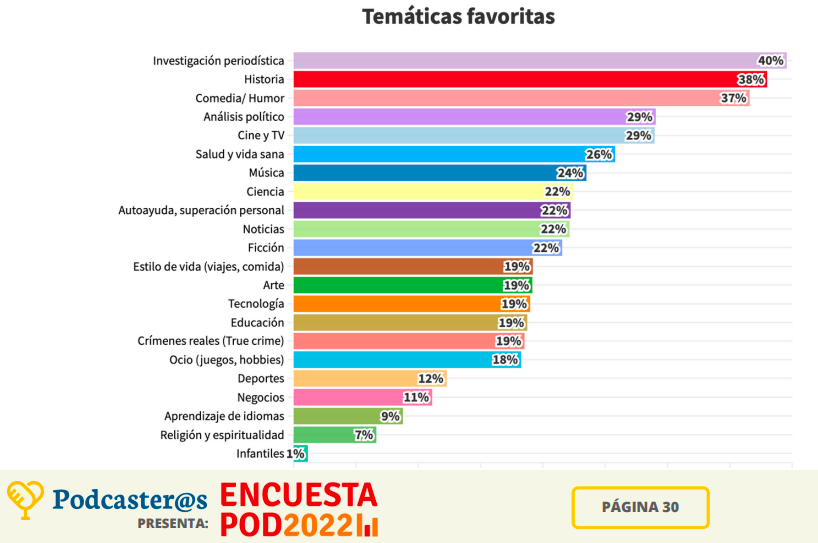 The EncuestaPod 2022 survey showed that listeners in the region like to listen to investigative journalism podcasts (Photo: Courtesy of EncuestaPod).

In contrast to these figures, one of the podcast formats that has grown the most in several Latin American countries in recent years is the "daily news" type. Legacy media have supported this format the most in countries such as Argentina, Brazil, Colombia, and Mexico.

"Five years ago, big media started to make their own podcasts," Eugenia Cabral, vice-president of the Brazilian Association of Podcasters (ABPod, by its Portuguese acronym), told LJR. "Folha de S. Paulo started doing 'Café da Manhã,' which is a daily news podcast. O Globo started doing 'Ao Ponto,' Revista Piauí has the 'Teresina Forum,' which is a political news podcast. When these big media started doing podcasts, we had a very strong growth of podcast journalism."

However, most of the podcasts mentioned above are produced in partnership with digital audio platforms. And despite the fact that more and more media are betting on the "daily news" format, in an attempt to emulate the success of The New York Times' "The Daily," charts show news podcasts are not people's favorite format.

In Spotify's charts alone, the most successful "daily news" podcasts rank below the 20th place of preferences.

"We are quite biased and obsessed with what has happened with the New York Times and 'The Daily,' but the truth is that in Latin America we live another reality," Mauricio Cabrera, media specialist and founder of the content journalism platform Story Baker, told LJR. "Neither do you say, 'what I heard in 'Expansión Daily' or 'El Café de la Mañana' was so remarkable or so interesting that the media picked it up. That hasn't happened. That's something we should look for, that the journalistic podcast not be just a recounting of what happened, but rather a conversation starter."

When it comes to listeners, aim for quality, not volume

Cabrera pointed out that generally the news podcasts that stand out most in the charts are precisely those produced in partnership with digital audio platforms, or those that have advertising support from the major media that produce them.

However, experts agree that creating a successful podcast does not necessarily have to do with the number of listeners or its ranking in popularity charts. It is, they say, about transforming its listeners into a community and creating a listening habit that turns into loyalty.

"The success of a podcast, especially a journalistic one, is not necessarily to reach millions of people, but to achieve a commitment, a high engagement between the people who are listening to it and the creator or journalist who is developing his [or her] own show," Cabrera said. 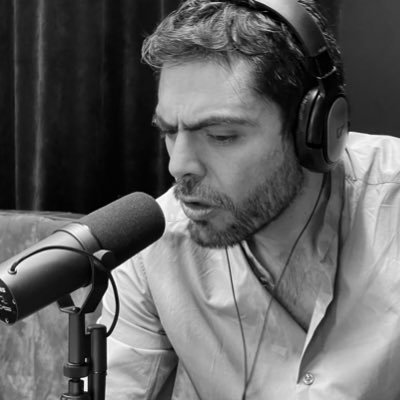 There are also several cases in which news podcasts are backed by the personal brand of a journalist who comes to the podcast universe already with a captive audience. That puts them at a competitive advantage, although it doesn't necessarily guarantee engagement and loyalty from that audience.

"Podcasts have to have that community, that group, for listeners to go and find other listeners," Cabral said. “I believe work has to be done with the community that big media doesn't get to, because their audiences are so big.”

A loyal and engaged audience community can manifest itself in a variety of ways on behalf of podcasts. One of those ways may be financial support for its creators. ThePod 2022 Survey found that 75 percent of those surveyed said they would consider making a payment or donation to their favorite podcast. And 73 percent responded that the motivation for making a payment would be to financially support podcast creators.

These figures show that memberships, subscriptions and crowdsourcing could be promising opportunities for news outlets that may find it difficult to sell their podcasts to advertisers because of the topics their news products cover.

So far, however, several independent journalists who have launched their podcasts under a subscription or donation model are barely able to cover production costs.

"Most of those independent podcasts offer subscriptions for supporters. When I've talked to some of them, they say the podcast doesn't pay them, but [subscriptions] pay for the podcast. [In other words] They don't have to take money out of their own pocket to do the podcast, the podcast pays for itself, but they can't live off the podcast," Cabral said.

Storytelling and sound design to engage the audience

To have a financially sustainable journalistic podcast without relying on advertising, and regardless of the subject matter, journalists must embrace the intrinsic characteristics of the format and think of their productions more as audio documentary or narrative products.

"To the extent that the media learn to create intellectual property - in this case through the podcast - they will be able to get out of the dependence they have on more conventional advertising sales. And, suddenly, they will be able to say 'I already made this documentary and Spotify, Amazon, Apple are interested in it," Cabrera said. "These types of productions end up having better results than simply writing articles.”

However, the precarious conditions in which many journalists work and the urgency of the situation are factors that make it impossible for them to devote time and resources to productions that require more hours of work, such as a documentary podcast.

In addition, a lack of budget also reduces the possibilities of producing podcasts with an attractive sound design that can enhance the narrative and keep people's attention.

"If you don't have a budget and you are asking a reporter to do everything quickly, following trends, it is very complex to be able to do this 'slow-burn' journalism," Cabrera said. "Something that still needs to be done is to educate journalists, editors, writers, scriptwriters to know how to tell stories in audio, so as not to end up falling into the temptation of turning the podcast merely into a replica of what has always been done in radio. Because where a journalistic podcast really makes a difference is in the research, in the narrative, in addition to sound design." 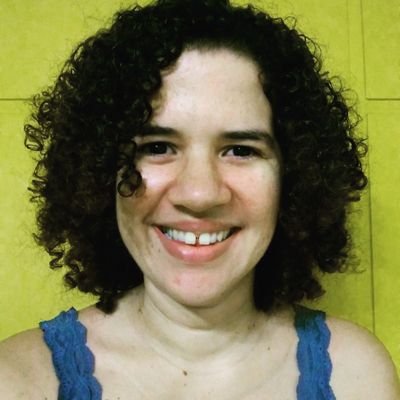 The vice-president of the Brazilian Association of Podcasters, Eugenia Cabral, said that podcast creators should aim for turning their listeners into a community. (Photo: Twitter)

Narrative podcasting allows for the use of journalistic tools, such as investigative techniques and interviews, which, combined with good sound design, can hold the audience's attention, said Cabral, who mentioned the "Praia dos Ossos" podcast as a good example of this in Brazil.

This is a true crime podcast based on a journalistic investigation by Revista Piauí into the murder of Brazilian socialite Angela Diniz, in 1976, at the hands of her romantic partner. The podcast was so successful that its rights were acquired to be turned into a video series for a streaming platform.

"The audio format allows us tremendous freedom. We can make use of some types of texts that cultural journalism has, that narrative has, such as characters, flashbacks, flashforwards...," Cabral said. "Print media uses that and some [reporting] on television as well. I think the podcast gives us so many options that could be explored and I think, if it were done, the audience would respond very well."

Just as "Praia dos Ossos" did, the documentary narrative podcast makes it possible to delve into topics that were once news and explain them from new perspectives and following other rhythms. The format also makes it possible to address issues that would be difficult to explain in traditional media.

"There are quite a few podcasts that may not deal with the news of the day, but they do take some fact and do some serious journalism work to address it, such as in narrative chronicles, what in the United States they call 'nonfiction,'" Vaccaro said. "In podcast jargon this name has been adopted, but within 'nonfiction' there is much that is investigative journalism."

According to Cabral, independent journalism in Brazil is already taking advantage of this documentary and narrative podcasting, and is gradually building an audience.

For independent journalists, in addition to the fact that the format is accessible to them in terms of production resources, what works in their favor is that they own their decisions and expectations around their podcast.

"We have good independent podcasts that are doing a great job because the journalist doesn't have a boss, or advertisers. He or she can work their story as they see fit and it's not that expensive," Cabral said. "You just have to have a good microphone, a computer, some editing software. Independent journalism in Brazil has turned a lot to the podcast side."