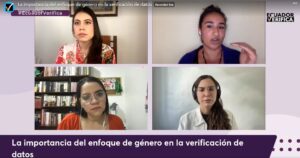 When dealing with issues from a gender perspective, fact-checking is essential in the search for equality. "A gender approach allows you to think outside the box, to question, to tell stories and do journalism in a more inclusive way," Isabela Ponce told Latam Journalism Review (LJR). “If you take that approach to fact-checking, you can do a great job by making the truth transparent with data and [thus] refute those who ‘oppose’ women fully enjoying our rights.”

This was the central topic of the online discussion "The importance of a gender approach in fact-checking" organized by Ecuador Verifica, a coalition that brings together media, nonprofit organizations and universities, with the aim of verifying political discourse and promoting transparency in public institutions.

“The media must try to gradually eliminate stereotypes and traditional gender roles, which have become the grounds for violence committed against women,” Loaiza said, quoting the United Nations Population Fund (UNFPA).

Doing fact-checking in a more inclusive way starts with the topic selection, the approach and the choice of sources. “The situation around the rights of women, the LGBTIQ+ community, vulnerable groups, minorities and ethnic groups must be addressed and be part of the media agenda. In addition, an editorial line must be created or defined that prioritizes content validated by science, academia, think tanks, civil society organizations instead of 'opinions' that are based on prejudice or stereotypes,” Desirée Yépez told LJR.

On the other hand, the verification of public discourse, regularly used by fact-checking organizations, can also include a gender focus.

An example, discussed at length during the streaming, was the debate carried out by the National Assembly of Ecuador on the decriminalization of abortion after rape and how the media are covering it.

“Surrounding this debate on abortion after rape, I’ve seen how many journalists in favor of a supposed ‘objectivity’ put the argument pro and con on the table. However, they don’t carry out the full fact-checking work, because you can’t give space to a person who is against or in favor to have a balanced view, if one person is misinforming,” Thalíe Ponce said.

During the online conversation, the women journalists emphasized that when talking about journalism from a gender perspective or a focus on human rights, they do not mean issues related only to women. It’s also about stories related to the LGBTQIA+ community, who have been approached by the media as a spectacle, discriminating them or relegating them to the crime pages.

“It is important to focus on gender within journalism. If we look at the top positions in newsrooms, they tend to be held by men and, if we look deeper, these are men cast from the same mold and who lack intersectionality [which seeks to examine the root of the different oppressions that affect women]. This [in turn] is reflected in the content, in the approach taken and how the audience perceives the information,” Thalíe Ponce said.

Likewise, the panelists spoke about the importance of human rights topics being handled by the media and journalists with respect, without re-victimization or sensationalism, while staying true to the story as much as possible. Journalism must also include a transversal approach of gender.

According to the Economic and Social Council of the UN, making a gender perspective transversal is the process of evaluating the implications for the different genders of any planned action, including legislation, policies or programs, for all areas and at all levels, with the ultimate goal of achieving gender equality.

“Making the gender approach transversal is a challenge. You have to speak with more women expert sources and look for diversity. Journalism was constructed by and has been very masculine in its approach. Now, using a gender approach, we look for a diversity of voices. You have to get away from the generic approach that we first learned in journalism”, Isabela Ponce said. 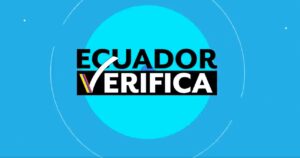 All journalists should be fact-checkers

The difference between traditional journalism and the so-called “fact-checking” carried out by verifying organizations is that, in the latter, a grade can be assigned. You can openly say this information is true, false or dubious. However, every journalist should be a fact-checker, Yépez emphasized during the discussion.

“Fact-checking is journalism in its purest form. When we do journalism, we have to make sure that the information we are publishing has been checked and we have sources which support what we are going to publish. The risks of not doing so are enormous. One should not fall into simply quoting someone. The important thing is to tell the whole story,” Yépez said.

Achieving a gender approach in journalism and fact-checking has suffered setbacks given the increase in 'fake news' and the spread of false information on social networks. In many cases, journalists are faced with organized campaigns of misleading content and disinformation groups that keep improving their techniques.

“Anti-rights groups have a great ability to manipulate information. When you listen, for example, to the pro-life Ecuadorian Assembly members, you realize they are manipulating information. They use some data that, in fact, can be true and precise, but the way they present it and decontextualize it, it becomes difficult to figure out whether it's true or false,” Yépez said.

Journalists Thalíe Ponce and Isabela Ponce agree on this topic since, in their view, groups that seek to misinform sometimes mention facts that are correct but are taken out of context. That's how they achieve their goal of confusing and manipulating.

“In some cases, there is ignorance and a lack of awareness of certain data. On the other hand, there is manipulation. There is also a malicious use of data, an intention to influence public opinion,” the Indómita editor said.

Another example mentioned during the discussion was a social media post by President Guillermo Lasso's wife, where she stated why, according to her, interrupting a pregnancy is a human rights violation. The GK team wrote a story proving the inaccuracies and fallacies about abortion and the legislative discussion that appeared in that post.

In this way, by fact-checking a public figure's discourse, journalists can help prevent disinformation that threatens women's rights. "Following this path of journalism and fact-checking with a gender focus, women journalists can make more people aware of the need for gender equality," Isabela Ponce told LJR.