By Zamir Fajardo* and Silvia Higuera

With the participation of at least 300 people, the webinar “Legal challenges for the protection of freedom of expression in times of COVID-19” was organized by the Knight Center, UNESCO and the Special Rapporteurship for Freedom of Expression of the Inter-American Commission on Human Rights. These entities organized the online course for judicial operators, “International Legal Framework for freedom of expression, access to public information and protection of journalists,” which is celebrating its sixth edition at the Ibero-American level this year. Currently, almost 2,400 judicial operators in the region are being trained through this initiative.

The webinar was attended by Edison Lanza, Special Rapporteur for Freedom of Expression of the IACHR; Ricardo Pérez Manrique, judge of the Inter-American Court of Human Rights; Joan Barata, Spanish expert from the Center for Internet and Society and Cyber Policy Center of Stanford University; and Guilherme Canela, head of UNESCO's section on Freedom of Expression and Security of Journalists. Yuria Saavedra, a Mexican lawyer specializing in Human Rights, Humanitarian Law and International Criminal Law, was moderator. She is part of the team of monitors of the online course mentioned above.

For two hours, on May 22, the experts addressed topics ranging from the danger that false information represents in the pandemic to the relevance of journalism in covering it to data privacy and the guarantee of internet access. 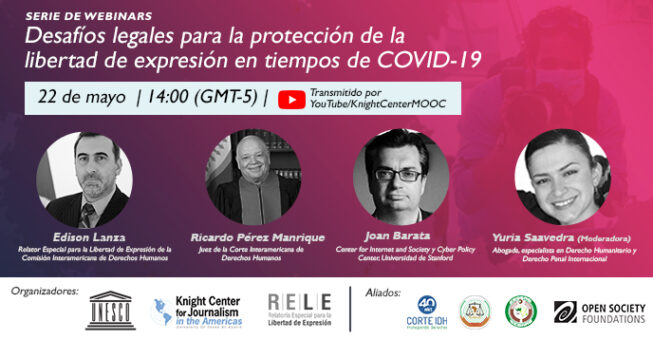 In the initial presentation, Canela warned of the existence of what he called "a perfect storm" for freedom of expression due to the impact of COVID-19. In eight points, the UNESCO expert explained this perfect storm that includes, among other elements, the increase of false information – which he called “desinfodemia” – that can only be faced with "a free, independent and plural press.”

He also mentioned the increase in violence against journalists, dismissals and the impact on reporters' mental health. Canela highlighted the closure of media outlets and its economic impact that facilitates the capture of these outlets by the powerful, including the State itself.

In this regard, he highlighted the role of judicial operators. “What we are going through with COVID is somewhat new in the sense of the dimensions of the pandemic, but the elements are fundamental elements of the classic discussion of the risks we have for the protection and promotion of freedom of expression and access to public information and the security of journalists," he said.

During his presentation, in addition to highlighting the obstacles to freedom of expression, Lanza highlighted the work of international organizations that have been reminding States of the duty to guarantee human rights.

According to the Rapporteur, these entities have issued "some soft law regulations to give a first legal response to this situation." He also said that they monitor what happens on a daily basis to try to give concrete answers "about the violation of these rights in the context of the pandemic, because obviously the region is not uniform and there are different degrees of problems."

Lanza highlighted the role of the press that has been "even more important than the one traditionally played in a democracy in a normal situation." According to him, the rights related to the information system should not be the object of suspension in general, and "any restriction that is made must be ulterior, not a restriction of prior censorship, and must be necessary and proportional." The latter due to the decrees that have been issued in the region where information on COVID-19 is penalized with the alleged objective of attacking false information and disinformation.

Other topics that the Special Rapporteur recognized as relevant for the analysis of this topic are the fundamental role of universal access to the internet, the right of access to public information and the need to preserve privacy and data protection in the management of pandemic.

Lanza ended by offering recommendations to States such as not restricting the work of the press, not blocking media outlets, but especially being careful with their statements.

“We have observed a very worrying trend by some public authorities, including presidents, of stigmatizing pronouncements, which call for disbelief in the press and even in scientific pronouncements," Lanza said. "There we also make a recommendation to States and public officials to observe a special duty of care in pronouncements and statements regarding the evolution of the pandemic and the role played by the press, journalists and experts who are working on these issues.”

For Judge Pérez Manrique, freedom of expression should not be subject to limitations, especially in cases such as a pandemic. For the judge, the more information the population has, the more possibilities there will be for a solution, and that is why he called for "keeping communication open."

He recalled that last April, the Inter-American Court issued a declaration on the relationship between COVID and human rights, in which it establishes that the new scenario that arises in the face of a pandemic must be faced within the framework of the rule of law and respect for human rights.

“The coronavirus issue is essentially a matter of human rights and that the rule of law and human rights are fundamental,” said the judge, who took the opportunity to recall the essential role that judges play in these circumstances, pointing out that it is not by chance that in many countries the state of emergency attempts to restrict the activities of the judiciary.

The judge emphasized the task of judges to guarantee that “no restriction on freedom of expression” is admissible if it does not comply with the triple test of legality, which must be applied by all judges when States intend to apply limitations to freedom of expression.

“The message I want to give is that neither the rule of law nor human rights are suspended or go into a state of latency. Human rights, guarantees and the rule of law are essential to people's lives,” Pérez Manrique said. “Therefore, the management of the rule of law, which is what we are hearing about today – such as unjustified restrictions on access to public information and information that is cut in some way, difficulty of access to knowing something fundamental to the foundation of the decisions that are made –  they are restrictions of rights and they have to be adequately founded in order to be challenged.”

Barata pointed out how states of exception are allowed by national international and constitutional treaties, but that in all cases these must be declared by the States using the existing regulations and not by de facto means. This includes, for example, some restrictions on freedom of expression – such as limiting crowds – as long as they are to preserve public health in this case. In this sense, he highlighted the role of judges when reviewing these restrictions.

He highlighted some of the most important challenges in confronting the pandemic, such as access to public information that does not end with the right of citizens to ask. For Barata, it is particularly important that the States have active transparency policies that are accessible to citizens, where the measures that are adopted are explained in a concrete way, explaining what the situation is, what the risks are, the state of the health system, what measures can be taken and which cannot be, among others.

Other topics addressed by Barata were internet access, which should not be restricted with the argument of avoiding panic; intimidation of journalists and attacks by politicians; protection of the working conditions of journalists who are on the front line; and false information.

He also considered that the pandemic is making evident the problems that already existed in the system and in the system of protection of freedoms such as the lack of media diversity, excess concentration and lack of independence of these. “Those vices that already existed to date become especially problematic in the context of the crisis, not to mention the role of the public service media. Obviously if they are in a crisis situation or are not able to provide the service correctly outside the crisis, that problem will become more evident now,” the expert said.

After the individual presentations, there was space for group discussion based on questions from the participants that were grouped by a team of experts.

Among the issues discussed were the role of journalism in society amid so much false information, the role of scientific journalism, what to do when States hide information, to what extent should the pandemic be reported without generating panic, as well as the handling personal data, for example, from people infected with COVID-19.

Canela closed the event highlighting the role of judicial operators at this time of “uncertainty.”

“In these processes of enormous uncertainty, we need rights to be protected even more, we need more transparency, more accountability. And for all that, the topics that we were discussing here today – a free and plural press, privacy, access to public information, the proper functioning of the internet  – are all fundamental questions in which you judicial operators (… ) have a fundamental role in your countries in the inter-American context," Canela said. "We, all the organizations that are organizing this and other events (...) it is essential to be able to be here and to be able to support you in your work because at the end of the day you are the ones who carry out, in each of your countries, the protection of everyone's rights.”

In addition to the organizing entities, the webinar had the support of the Inter-American Court of Human Rights, the African Court on Human and Peoples' Rights, the Economic Community of West African States Court of Justice and Open Society Foundations.

If you want to watch the event, which is in Spanish, click here.

*Zamir Andrés Fajardo is a Mexican lawyer of Colombian origin with Master's degrees in Constitutional Procedural Law and Human Rights. He is currently the Third General Visitor in the Mexico City Human Rights Commission. He is also part of the team of monitors for the course “International Legal Framework of freedom of expression, access to public information and protection of journalists.”