A roundup of 2023 events for Latin American journalists

In journalism, participation and collaboration are essential. And although there’s not always time or  opportunity to gather journalists from all over the world in the same place, the various journalism conferences, festivals or symposiums held annually have become gathering places where alliances and innovative ideas can emerge.

Due to the COVID-19 pandemic, many of these conferences got canceled or moved online. However, since 2022, massive face-to-face conferences have been reestablished and, in some cases, hybrid formats have been adopted.

LatAm Journalism Review (LJR) created a list of the most important events for journalists in Latin America to be held during 2023. If an important event is not on this list, please send us the information to latamjournalismreview@austin.utexas.edu.

Hay Festival Cartagena 2023 will be held in this Colombian city on January 26-29. This year the festival, with a focus on literature and art, celebrates its eighteenth edition. The theme will revolve around the genre of travel chronicles and podcasts. Conversations will also be held on how to narrate violence and democratic crises.

Hay Festival Cartagena 2023 will hold for the first time a Cultural Journalism Lab, where eight journalists (who can be editors, sound producers, community managers, videographers, or photographers), under 30 years of age, will be selected to help create content about the event. They will also join master workshops and be under the guidance of four Colombian mentors: Laura Sofía Mejía, a photographer from Pereira, expert in transmedia and director of Baudó AP; Sebastián Duque, podcaster from Cartagena, producer of Cartagena Federal; David Lara Ramos, one of the most renowned cultural journalists from Cartagena; and Ángel Unfried, director of Artimaña Editorial, former director of El Malpensante, former general editor of the magazine studio of Semana and editor of Bacánika.

The Investigative Reporters and Editors (IRE) annual data journalism conference will take place March 2-5, 2023 in Nashville, Tennessee. The conference includes panel discussions and debates, as well as networking events. Although it is an event aimed at an Anglo-Saxon audience, journalists from Latin America can also attend as long as they are members of the IRE organization.

Registration fees are required to attend, but scholarships are also available. More information at https://www.ire.org/training/conferences/nicar-2023/

The event, which has not been held since 2019 due to the COVID-19 pandemic, will take place this year in Medellín (Colombia) between March 27 and 31.   It will feature world-leading scientists, journalists and decision-makers from different areas of knowledge.

The Knight Center for Journalism in the Americas announced that the 24th International Symposium on Online Journalism (ISOJ) will be held April 14-15, 2023.

In 2022, the Knight Center took on a new challenge by producing ISOJ in an innovative hybrid format that connected journalists, media executives and journalism professors and students from more than 80 countries. This year, the hybrid model will be replicated.

Videos of the 2022 symposium are available on the ISOJ 2022 archive page, posted by panel, and also on YouTube with the original versions in English and with simultaneous interpretation in Spanish. In addition, articles on the topics covered in previous events are available in the news section of ISOJ.org.

Since 2008, the day after the symposium, the Coloquio Iberoamericano de Periodismo Digital has also been held, which annually brings together journalists from Latin America, Spain and Portugal to discuss the present and future of digital journalism in the region.

More information on ISOJ 2023 registration and panels will be posted in coming weeks.

The 3i Festival - Innovative, Inspiring and Independent Journalism- is the first festival of the continent focused specifically on innovation and entrepreneurship.

This festival has been held in Brazil since 2017. It was held twice in Rio de Janeiro and also in the cities of Porto Alegre, Belo Horizonte and Recife. In 2022, it held its first 100% virtual edition.

Media Party is known as the most important media innovation conference in Latin America. Born out of Hacks/Hackers Buenos Aires, the event brings together major companies such as The New York Times, The Washington Post, The Guardian, Associated Press, The International News Media Association, and regional communities of the largest network of journalists and developers in the world.

It is held annually, in August, in the city of Buenos Aires. For three days, journalists, entrepreneurs and software developers meet to work together for the future of media. In addition to the conference, on the last day of the event there is a hackathon to create solutions and journalistic projects. 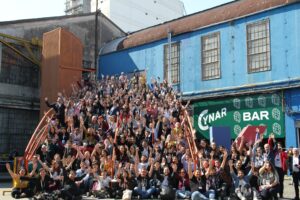 Last year was its first post-pandemic edition. There is still no information about the details of the 2023 event. They usually announce their news on their official website. https://www.mediaparty.info/

This conference is held every two years and usually attracts more than 1,500 journalists from over 120 countries. As in previous years, GIJC23 will feature a strong scholarship program to bring journalists from the global south and other regions to the conference.

In October 2022, Bogota was for the first time the setting for the Gabo Festival. This festival is known as the quintessential space for "storytellers and story lovers and the largest conference dedicated to journalism, citizenship and culture in Ibero-America."

The Gabo Festival had more than 4 thousand attendees and more than 115 activities including workshops, lectures and cultural meetings. During the event, the winners of the Gabo Award are also announced. Since 2022, it has five categories: Text, Image, Coverage, Audio, and Photography.

In 2023, this festival, which for years was held in Medellín, will return to Bogotá. "We are happy because the Gabo Festival did very well in its move to Bogotá, this city where [Gabriel] García Márquez deepened his skills as a journalist and where he   spurred on several journalistic initiatives and ventures. We had an excellent turnout and we are tremendously encouraged because our institutional allies have renewed their commitment to have the Gabo Festival 2023 in Bogotá," Jaime Abello Banfi, CEO and co-founder of the Gabo Foundation, said at the end of the event in 2022.

The Latin American Conference of Investigative Journalism (COLPIN) is the most important meeting of investigative journalists in the region. It gathers and highlights, during four days in a Latin American city, the best works published the previous year in the press, radio, television, and Internet, in the voices of their authors. 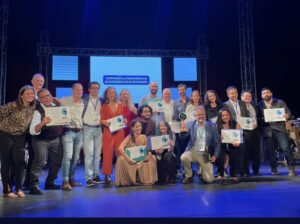 COLPIN is organized by the Instituto Prensa y Sociedad (IPYS) and during the event is presented the Latin American Investigative Journalism Award, as a way to publicly recognize the best journalistic investigations and to discuss with their authors more efficient strategies to reveal and confront corruption.

The Latam Festival of Digital Media and Journalism was founded in 2012 as a space for discussion and learning among media managers, editors, journalists, tech experts, communicators, and all those interested in digital journalism.

It is an event sponsored by Factual and Distintas Latitudes and is held annually in Mexico City.

"These types of conferences are necessary to deepen our understanding of the different perspectives of those who do journalism in Latin America and the Caribbean. In the Festival we learn, create community, forge alliances, find an echo of our experiences and meet again as journalists, colleagues and friends," according to an editorial published by the news outlet en15días about the festival.

The dates and agenda for the 2023 event are not yet available. However, the festival usually takes place in the last quarter of the year in a hybrid format.

The Zarelia Festival has been held since 2019 and is headquartered in the city of Quito, Ecuador. As promoted on its website, the event aims for news outlets in the region to share their experiences and learn from the best works of feminist journalism and gender-focused journalism in Latin America and the Caribbean.

"The festival arose from a study conducted by El Churo and Wambra-Medio Digital Comunitario of Ecuador in 2018, in which 31 news outlets were identified among feminist digital media and generalist media with a gender focus in Latin America, media that explore narrative, investigative and opinion journalism. Then, we saw the need to meet, to get to know each other, share experiences, challenges and difficulties," the creators of the event said on their website.

The event is held in virtual and face-to-face modes. The 2023 program has not yet been posted. However, the festival tends to be held towards the end of the third quarter of the year.

Dromofest is the youngest festival on the list. It has been held since 2021 by Dromómanos, an independent producer of journalistic projects specializing in in-depth reporting and long-form stories that was founded in 2011 by Alejandra Sánchez Inzunza and José Luis Pardo Veiras.

"Dromofest is an event where you can learn from the best, reflect on the most relevant topics in Latin America, meet people who, like you, work on one or more of those topics, and discover that journalism is a whole experience. Great thinkers, opinion leaders, creators, activists, and local and international journalists meet in a Latin American city and virtually to debate and share ideas on the most important issues of the region through conversations, networking, workshops, a shared space among colleagues, and a performance/party," according to their website.

Dates for 2023 have not yet been announced. Last year, the event was held in Mexico City. However, they hope to hold it this year in another Latin American city.