While legal harassment of well-known Guatemala City journalists José Rubén Zamora, publisher of the daily elPeriódico, and Juan Luis Font of the broadcast analysis program Con Criterio have made international news in recent months, less well-known are attacks against vulnerable journalists who live away from the capital—in provincial cities and in the rural areas of Guatemala.

Of the 116 aggressions against journalists in the country from Jan. 1 to Oct. 31, 2021, 42 percent took place outside of Guatemala City, according to a recent report from the Association of Journalists of Guatemala (APG, for its acronym in Spanish). Additionally, about half of the total complaints received by the Prosecutor for Crimes against Journalists during that same period came from outside the capital, APG reported.

Provincial and rural journalists in Guatemala report facing physical attacks, destruction of their equipment, legal harassment and economic pressure. LatAm Journalism Review (LJR) spoke to those reporting outside Guatemala City about what they say are growing challenges to their work. 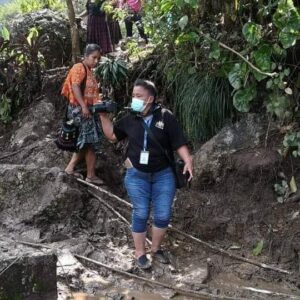 Photojournalist Irma Tazi has been covering crime, accidents and narco-trafficking for Nuestro Diario for more than a decade. (Irma Tzi)

Irma Tzi started her 14-year-long journalism career working for community radio in the province of Alta Verapaz, in north central Guatemala. For more than a decade she’s been a correspondent covering “notas rojas”—“red stories” of the “if it bleeds, it leads” variety— for tabloid Nuestro Diario. The paper is short on copy and long on gory visuals focused on crime, narco-trafficking, and accidents. Tzi is the only Indigenous woman photojournalist working for Nuestro Diario in her province.

In 2016, Tzi had to recover from an assault by a machete-wielding attacker. She thinks he was hired by someone named in one of her stories involving organized crime. Tzi said she has survived other physical attacks as well. She has also received death threats and been intimidated at her home. “I do this because I need the work and also because I like what I do—informing the public,” she told LJR.

Tzi maintains that in recent years her work has become even more challenging. “Now it’s not just the criminals who don’t want you to cover them—it’s officials and people in general.” She recalls how on a number of occasions government officials have taken her phone and erased its contents, all the while insulting her “..in an abusive manner.” She has filed complaints with the Prosecutor’s Office for Crimes Against Journalists, but nothing has come of these actions. The Office could not be reached by LJR for comment.

In addition, says Tzi, she’s consistently the object of discrimination for being an

Indigenous woman in a profession that’s still overwhelmingly male, and in Guatemala, often machista. “Some people just don’t want to see a woman get ahead,” she maintains, “…they’ll put obstacles in her way.”

In neighboring department Izabal, another recent example from October involved three community media journalists covering a state of siege imposed by the government in the Indigenous community of El Estor—the site of a long-standing mining dispute. Carlos Choc, Juan Bautista Xol, and Baudilio Choc, according to the news site Prensa Comunitaria for which they reported, were hunted down by security forces going door-to-door and harassed—“…persecuted for the simple fact of being journalists.”

Choc’s reporting on the contamination of Lake Izabal allegedly by a Swiss-Russian-owned nickel mine has made him a target of persecution for several years now. Mine officials, who deny the project is polluting the lake, first brought charges against him in 2017.

Choc, a Q’eqchi Maya, has also been threatened with lynching and had his photographic equipment stolen on several occasions, Prensa Comunitaria reported. He argues, “…the State should be protecting our work and not persecuting us for doing it…”

National media such as the broadcast network Guatevision and the country’s leading daily Prensa Libre have in recent years been forced to cut back on coverage of the provinces due to financial constraints—resulting in salary cut-backs and lay-offs, reporters say. This has driven many journalists in the provinces to find other jobs, leave the profession, work for themselves, or accept less-than-ideal working conditions. 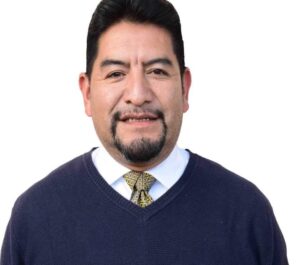 Henry Popa, once a television correspondent for various national networks in the city of Quetzaltenango, now works for local radio Stereo 100 and is vice-president of the regional press association.

“With this change in government nearly two years ago,” Popa told LJR, “…there was a coordinated effort to exert pressure on local media.” When the ruling party’s municipal candidates took office, he alleges systematic efforts began to bar the press from public meetings and to deny them access to public information. “The doors were literally closed in our faces,” he says.

The municipality of Quetzaltenango could not be reached for comment.

Another instrument used to censor independent journalists outside the capital is what Guatemalans refer to as “pautas,” i.e., funds paid by government agencies to secure ads in a newspaper, website, or broadcast outlet. These payments are often used to leverage favorable reporting.

Guatevision’s Quiche correspondent Hector Cordero is familiar with the many tools used to silence regional journalists. In the past, he’s been the object of physical attacks by agents of local politicians unhappy with his reporting. He’s also felt the economic pressure placed on the local media outlets for which he once freelanced to supplement his meager pay. “At first they attacked me physically, and when I continued to report, they hurt me economically,” he says.

Cordero’s salary was cut even further when Guatevision laid off all but two regional correspondents nationally. He said the network no longer reimburses him for gas and other work expenses, further curtailing his ability to report stories in neglected rural areas of his mostly Indigenous province.

Radio journalist Jose Alvarez of Quetzaltenango says the new reality often leads to self-censorship. It also places greater demands on journalists to be proficient in multimedia, and in some cases, also in marketing—some employers demand journalists seek advertising for their news programs, for which they are paid a percentage of this income. 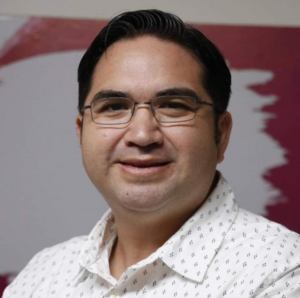 When Eduardo Sam Chun of Alta Verapaz was laid off by Guatevision, he set up a Facebook news site. While this has allowed him a measure of independence, finances are a constant concern, as is political pressure.

Some years ago, Sam Chun was accused of terrorism along with other communicators, some members of the opposition and activists. He credits the support of local and Guatemala City-based journalists’ associations for the legal and moral assistance that helped him get through that ordeal.

The criminalization of journalists is becoming increasingly common in Guatemala. Moreover, journalists in the provinces are especially vulnerable: “We are very public people,” says Sam Chun, “…everyone knows where we live, where we work, where our families are.”

What the future may hold

The journalists interviewed for this report —all practicing reporters for at least ten years—agree Guatemalan regional journalism faced challenges a decade ago, “…but not like today.” All of them expressed fatigue and frustration at the backward movement of their profession and current events. But, they also look to the next generation of Guatemalan journalists— young people “who are better educated, with energy and a desire for change…”

Still, given the increasingly authoritarian political climate in the country, Hector Coloj of the Association of Guatemalan Journalists warns that if the world doesn’t pay more attention to the “increasingly desolate and desperate situation of journalists in Guatemala—both in the capital and in the departments —where the levels of intolerance, violence, and censorship against the press in this country could reach those of nearby Nicaragua and the dictatorship of Daniel Ortega."