Independent journalists in Nicaragua demand press freedom, including return of newsrooms and delivery of printing materials

Nearly seventeen months after protests first broke out in Nicaragua, independent journalists in the country and international press advocates are repeating calls to protect media workers and freedom of expression.

To mark the International Day of the Journalist, on Sept. 9, the Independent Press Forum of Nicaragua called for the restitution of public liberties and demanded an end to the police state.

“Without Press Freedom, without Freedom of Expression and without Freedom of Information, efforts to restore rights in Nicaragua are useless. Freedom of expression and of the press are the fundamental basis for developing any process of democratization in Nicaragua,” reads a statement from the group. “The restitution of the Public Liberties is necessary to conduct free and transparent elections that guarantee compliance with the demands of JUSTICE, PEACE and DEMOCRACY, which the Nicaraguan population longs for. Therefore we demand the suspension of the de facto state of exception.”

The Nicaraguan government and its supporters have repressed the independent press since protests against the current regime broke out in April 2018.

Various journalists have been harassed, jailed, and forced into self-exile due to threats and legal action. Newsrooms of 100% Noticias and Confidencial were raided and remain occupied by authorities.

The independent journalists condemned the deaths of 328 people – numbers provided by the Inter American Commission on Human Rights – in this context. They also called for the release of political prisoners and for those in exile to be able to return home.

Among other demands, they also called for the headquarters of 100% Noticias and Confidencial to be returned and for judicial cases against Lucía Pineda Ubau and Miguel Mora, of 100% Noticias, to be closed. The two journalists were arrested and imprisoned for six months before being released as part of an Amnesty Law.

The independent journalists also highlighted the case of Ángel Gahona who was shot while covering a protest via Facebook Live on April 21, 2018 in Bluefields.

Two young men were tried and sentenced for his murder in a controversial trial, but later released as part of an amnesty law. Recently, a criminal court of appeals archived Gahona’s case.

“What remains is to investigate the true perpetrators,” a legal representative of Gahona’s family said, adding that the relatives don’t believe the youths were responsible, as reported by La Prensa.

In another well-known case, Radio Darío in León was set on fire on April 20, 2018 with nine workers inside who managed to escape. Harassment of Radio Darío and its journalists continued.

Owner, Anibal Toruño went into exile, but returned to Nicaragua on Aug. 29 despite risking possible “jail, harassment and provocation,” as he said on the program Esta Noche and was reported by Confidencial.

And then, on Sept. 7, a group painted threats on the walls of Radio Darío and of Toruño’s home in red and black, the colors of the ruling Sandinista National Liberation Front, as Confidencial reported.

“Aníbal Toruño has the human right to return to live at home and Radio Darío has the right to operate as normally as possible,” the Independent Press Forum of Nicaragua wrote.

In late August, press freedom experts with the Inter-American Commission on Human Rights and the United Nations had called on the government to stop reprisals against Radio Darío and other media workers in the country.

"There are indications of ongoing systematic repression of the media, with journalists being silenced, assaulted and threatened with death," the experts said, according to a press release.

"We are also concerned about the campaigns of intimidation and de-legitimisation of the media in which media workers are accused of being enemies of the homeland. This is a clear attempt to dissuade members of the public from using their voice, and an effort to persuade society to lose confidence in the media," they added.

The independent journalists also highlighted that printing materials and other media equipment are being held by customs authorities in the country.

The frontpage of the Sept. 9 edition of newspaper La Prensa also pointed to that fact.

“The dictatorship is affecting YOUR right to be informed,” read the frontpage of the newspaper’s print edition on Monday, along with Article 66 of the country’s constitution concerning citizens’ right to truthful information.

“We decided to cite article 66 of the Constitution as a direct message to the public because this blockade is not an attack against a company and its financial stability but is an attack on their freedom to seek and receive information,” La Prensa’s chief editor Eduardo Enriquez told the Knight Center. “Many people in Nicaragua do not have access to the internet and still read the print edition of La Prensa, and this arbitrary and illegal decision is affecting their constitutional right.”

According to La Prensa, the General Directorate of Customs (DGA, for its initials in Spanish) has been withholding its printing supplies since Sept. 10, 2018. As a result, La Prensa and newspaper Hoy, also from Editorial Group La Prensa, have had to reduce their page counts.

On Sept. 4, La Prensa reported that the Customs and Administrative Tax Court (TATA, for its initials in Spanish) again ordered the general director of the General Directorate of Customs (DGA) to deliver the newspaper’s printing materials.

Since that has not happened, the newspaper said in an editorial that it will now pursue its case in higher courts, and even to international entities. 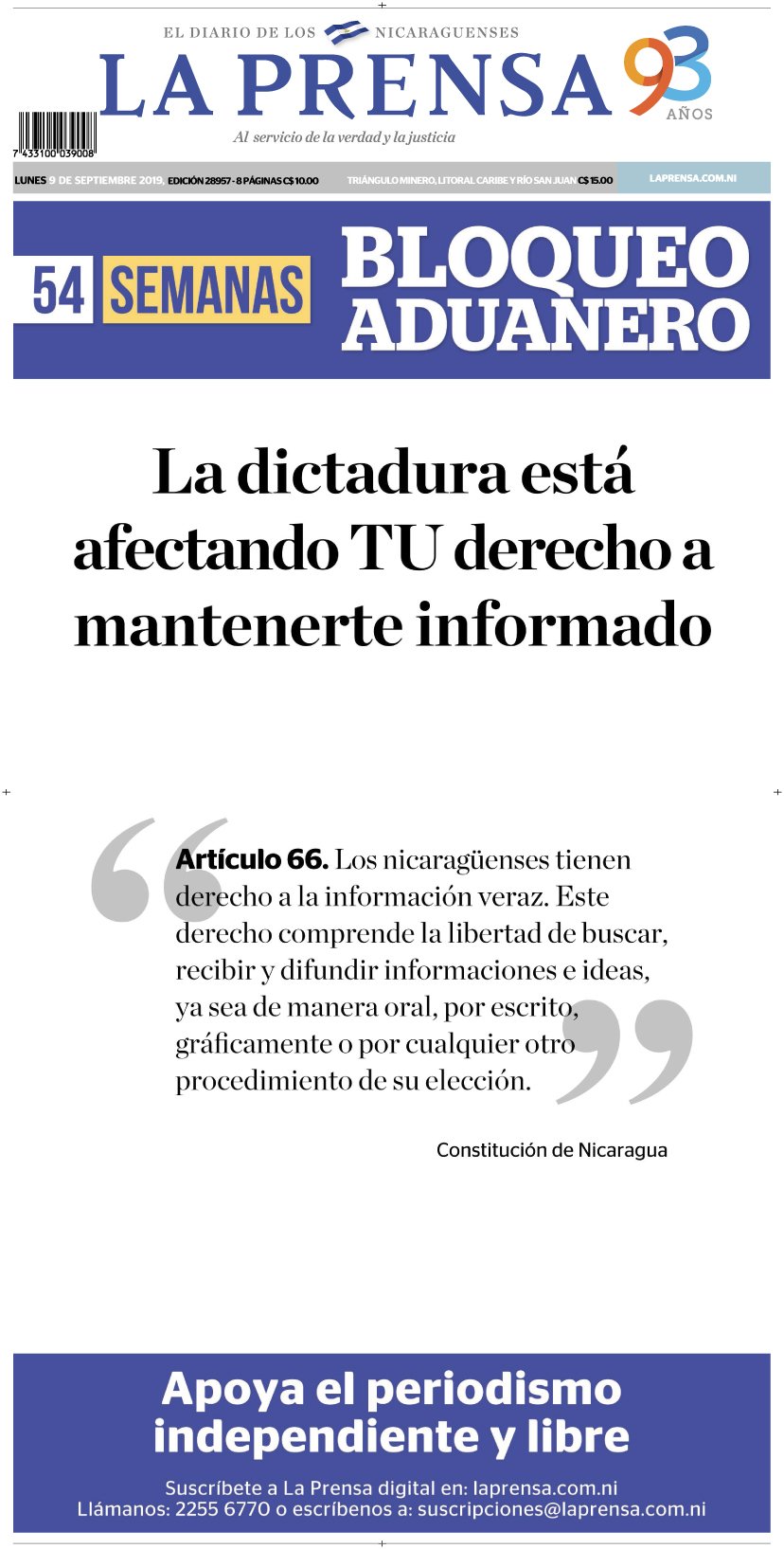 On the frontpage of its Sept. 9, 2019 edition, La Prensa published Article 66 of the constitution regarding the right to truthful information. (Screenshot)

Enriquez said the DGA has not given an answer regarding the materials being held.

“They just say they have no instructions to deliver the material. When we have requested an interview for them to explain, the response has been that ‘they need authorization from the Presidency,’ which shows that Medrano [the general director] only follows instructions from Ortega and Murillo,” the editor said.

And yet, La Prensa is not the only print publications to be affected by a shortage of materials.

According to El Nuevo Diario, the TATA also ordered the DGA to turn over its supplies, but the newspaper said it has only sent a portion.

On Sept. 2, freedom of expression groups PEN International and PEN Nicaragua called on the government to deliver materials to La Prensa and El Nuevo Diario, and to return the headquarters of 100% Noticias and Confidencial.

They also called on police and paramilitary groups to stop attacking journalists, media outlets, bloggers and writers, and to “guarantee the life and security, as well as all other human rights, of all its citizens.”

*The Knight Center was unsuccessful in its attempts to contact the DGA.