“The ‘I’ in ISOJ may as well stand for intimate. Twenty years ago, this conference started and it was small, and it’s remained small by design; it’s large in ambition, it’s large enough to have a real impact,” said founder and CEO of the Texas Tribune, Evan Smith, upon conclusion of the first day of the International Symposium on Online Journalism (ISOJ) this year, in recognition of the event’s 20 years. 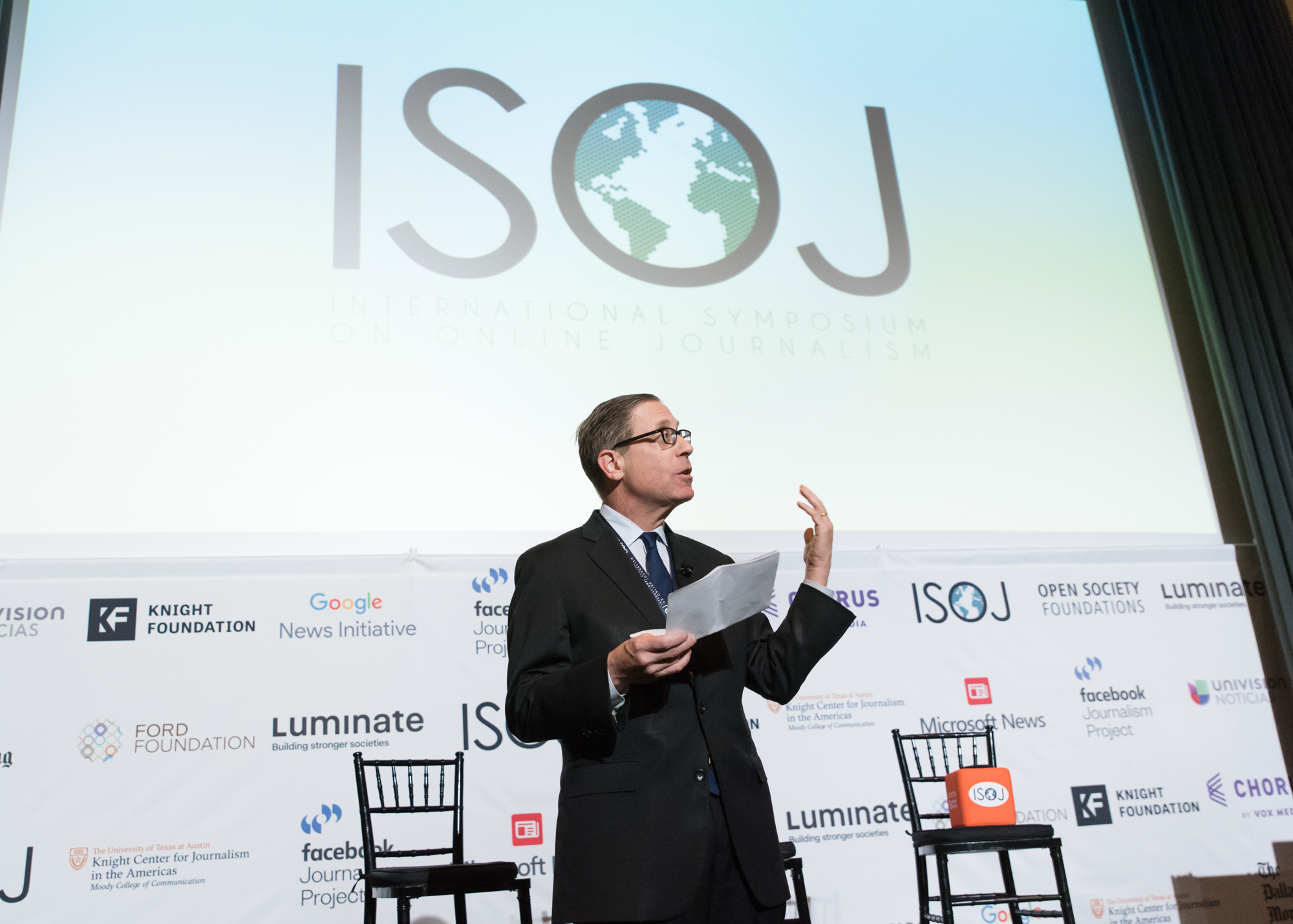 The first and visionary edition of ISOJ occurred in 1999, in a room that held about 70 attendees, with panelists from the United States.

This first edition of ISOJ was organized a year after the founding of Google (1998), before Facebook (2004) and Twitter (2006) appeared. However, these three U.S. companies have become a constant theme of ISOJ over the years, as they are currently the main platforms in journalism at the global level.

Twenty years later, ISOJ not only brings together almost 500 participants and speakers from 44 countries around the world, but has also become the source and inspiration for various initiatives and entrepreneurial endeavors in digital journalism globally.

Brazilian journalist Rosental Calmon Alves, a professor at the School of Journalism at the Moody College of Communication at the University of Texas at Austin, created ISOJ with the resources he had at that time as holder of the Knight Chair in Journalism.

Subsequently, and thanks to generous donations from the John S. and James L. Knight Foundation, Alves founded the Knight Center for Journalism in the Americas in 2002, a center through which journalists who want to grow their skills and learn new ones in the digital age can receive training at free or low cost. It is also the institution behind the organization of each ISOJ.

The conference has always sought to promote the debate of crucial issues that affect the journalism industry– economically, technologically and ethically. Issues such as the search for financing and threats to editorial integrity or the need to link traditional and digital newsrooms were addressed early on.

In 2004, a research component was added to the conference and the #ISOJ journal joined in April 2011 at the 12th ISOJ. The journal features peer-reviewed research papers that are presented at the symposium by academics from around the world.

All editions of ISOJ have been documented almost in their entirety, accumulating in an archive of two decades of video and transcripts of presentations from the invited speakers.

With a trophy and an emotional video that featured the testimonies of several journalists and scholars who participated in the first ISOJ and other editions, the work of Rosental Alves as the great promoter of this space, who brings together journalists and academics every year to discuss the future of digital journalism in the world, was recognized in front of the audience. 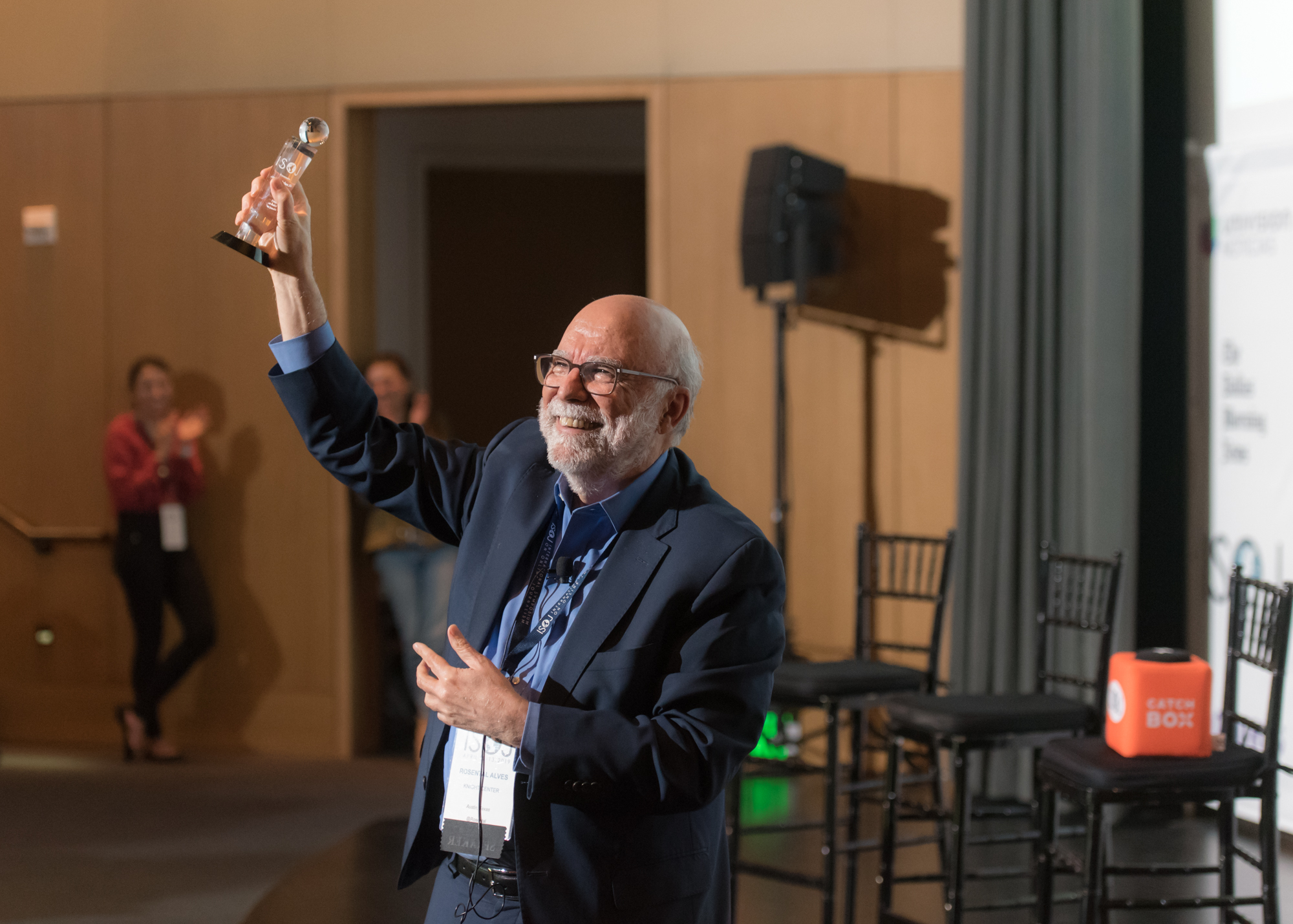 “I had never imagined that ISOJ would be 20 years old, so let’s do the next twenty years,” said a surprised and emotional Alves after receiving a trophy from his team.

“ISOJ is a truly, legitimate journalism conference, which is no small thing. It is an accomplishment that Rosental has built this,” Smith said. “This a place where year in and year out, we come to contemplate ideas, to road test innovations, to share best practices, to bullshit about our existential anxieties, professional and personal.”

“There are other places that do that. We all go to these conferences, but a lot of them are, quite honestly, unfocused and hit-or-miss, and overthought,” the Texas Tribune founder continued. “ISOJ and the program here every year is stitched together by Rosental with the precision of a surgeon and with the discernment of an art dealer. It is curated like a museum show, this program. That is why all of us keep coming back.”