In an atypical decision, the jury for the Vladimir Herzog Award for Journalism and Human Rights excluded the work “Cultures in Conflict” from the finalists in the photojournalism category. The reason: a formal complaint from the Hutukara Yanomami Association (HAY), which claimed that the photograph violates the image rights of the Indigenous people portrayed. After more than an hour of discussion on press freedom, journalistic ethics and Indigenous peoples' rights, the jury decided by 10 votes to 1 to disqualify the work. 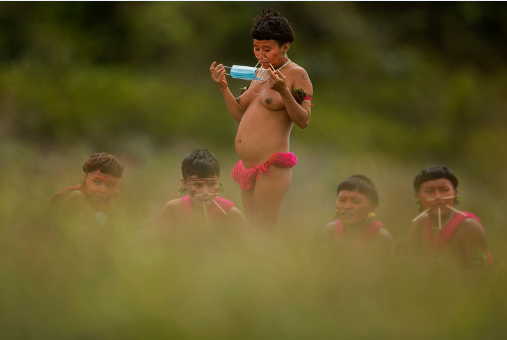 Cultures in Conflict: the picture was disqualified from the Vladimir Herzog Award. Photo: Joedson Alves

The photo by Joédson Alves, from news agency EFE, shows a Yanomami woman with a protective mask against COVID-19 in her hands. It had been distributed by representatives of the Brazilian government. The image was reproduced in several publications around the world and went viral on social networks.

“Disqualification put me in a position of violating human rights, to which I refuse to be assigned. I was the eyes of society on the government’s violation against Indigenous peoples,” Alves told LatAm Journalism Review. “The photo was entered in a contest on the defense of human rights because I thought the image did just that: where are the human rights of those people when the maximum that the public authorities think they deserve is a simple mask, which does not meet certification protocols, and that cannot be used by that group?”

The photograph was taken in early July during an Armed Forces medical mission in a village in Roraima, a state in the far north of Brazil. Alves was among journalists from various media invited to follow the work. Right after the mission, Yanomami leaders complained about not having been previously consulted about the trip and the work of journalists.

"I don't want foreign people to come just to take pictures of my children. People from far away took pictures and we don't want that (...) We don't want to be government propaganda," said Indigenous leader Paraná Yanomami in a video released by the Pro-Yanomami Network.

“The claim that I would have to have authorization from the Indigenous leader is legitimate, but it was not the reality I found. The representative at the scene just asked to avoid the children, which I promptly accepted,” Alves said. “I was doing my job properly identified, tested negative for COVID (including ultra protected with a jumpsuit, gloves, certified mask), in broad daylight, in front of everyone, in a large group of journalists and visual reporters who took the same pictures I did.”

The photograph had been chosen initially by a technical jury, but once the list of finalists was released, the work was questioned by HAY. "I don't like the use of the Yanomami image in the human rights award competition process. We are against it. We want the revocation of this award because we were not consulted, we did not authorize it. First of all, respect the Yanomami culture. [...] Today, we have Yanomami and Ye'kwana consultation protocol," said HAY vice president Dario Vitório Kopenawa Yanomami in a video sent to the organizers.

In a letter also sent to Vladimir Herzog Institute, Kopenawa also says that "the registration, transmission, and commercialization of the image of the Yanomami people without their consultation and consent ends up reproducing stereotypes that we do not want to be identified with."

In the second phase of the awards process and with the complaint already made, the exclusion was determined by a jury composed of representatives from organizations such as the National Federation of Journalists (Fenaj), the Brazilian Association of Investigative Journalism (Abraji), the Archdiocese of São Paulo and the Brazilian Bar Association, among others.

“It is not the professional on trial, but the circumstances in which the image was produced (...) Entry into that territory should have been deliberated before. The photo is of incredible quality, has enormous value. But the procedure was wrong from the start, as there was no consent from the Indigenous population,” juror Leonardo Medeiros, communication coordinator for the NGO Conectas Human Rights, told LatAm Journalism Review.

It was Medeiros who raised the issue during the jury meeting and suggested the declassification of the work. To LJR, he refuted the suggestion that the decision would mean censorship or affect freedom of expression: “there is a great lack of knowledge among press professionals on how to deal with the Indigenous issue. An almost colonialist vision.”

The only vote against the disqualification of the image came from Ricardo Carvalho, representing the Brazilian Press Association (ABI). He suggested keeping the photo as a finalist and those who had reservations about it would simply choose another winning work.

“I think the [judging] commission is censoring a work freely chosen by the jury [of the first stage]. (...) If you ask for authorization, the moment is over, the report is over,” Carvalho said during the live debate. “This photo is a dramatic moment in the country's Indigenous policy during the pandemic. (...) The face of the Indigenous woman seems to represent everything that the populations experience under the Bolsonaro government.” 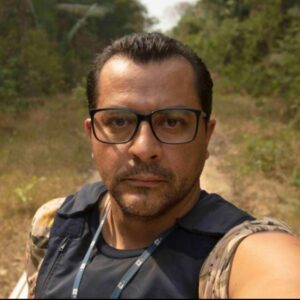 Joedson Alves, from EFE: "I was the eyes of society on the violation of the government." Photo: personal archive

In the same vein, photographer Renatto D'Sousa, a member of the jury that chose the finalists in the category, said he was surprised by the disqualification. With more than 30 years in photojournalism and an award-winning career, he considered the decision “very strong,” especially for the journalistic value of the image.

“The photo speaks more than the text will speak. The Indigenous woman looking at the mask [and thinking], 'what is this, how am I going to use this?... The world saw the inadequacy of government policy for Indigenous people,” D’Sousa told LJR. “Joedson's photo is brilliant. [The need for authorization] makes work unfeasible. In a little while, the general says ‘we don’t want,’ the bishop says ‘we don’t want.’ And then there’s nothing?”

Given the case, the organizing committee of the Vladimir Herzog Award for Journalism and Human Rights is considering including a requirement for entry to prove that the photos entered have authorization from the people portrayed.

"We suggested that it would be essential that all the photos entered, one condition was to have authorization from everyone present in the photo," Giuliano Galli, coordinator of Journalism and Freedom of Expression at the Vladimir Herzog Institute, told LJR. “The right to freedom of expression, journalistic, cannot override other rights. Photos are done out in the open and there is no obstacle [to ask for authorization]. You can balance [this with] the decisive moment, the photographer's ability.”

Galli was one of the jurors who voted to disqualify the photo, as was Paulo Zocchi, president of the Union of Professional Journalists of the State of São Paulo. He said the judging panel made sure that the winning entry was authorized by the people portrayed in the images: Yan Boechat won with a series of photographs of people mourning relatives who were victims of COVID-19 inside their own homes.

“Yan said in the application that part of his job involved convincing the people [to let themselves be photographed]. [...] The photographer goes to the field, he has the obligation to go there and talk to the Indigenous people and get them to authorize the photograph. It is the person's obligation,” Zocchi told LJR. "We have to reflect on how to put this in the regulations [next year]."

Images that recently won the photojournalism category of the Vladimir Herzog Award indicate that the task of requiring authorization as a condition for registration is a difficult one, as in 2018, 2017, and 2016.

The same can be said of the winning image from 2008, which shows when a pregnant Indigenous woman, with a child on her lap, is assaulted by the military police of Amazonas. The photo, by Luiz Vasconcelos and published in the newspaper A Crítica, in Manaus, traveled the world and showed violence in the treatment of the State toward Indigenous peoples.