'Journalism in Times of Polarization and Disinformation in Latin America:' Sign up for free webinar in English, Spanish and Portuguese

LLILAS Benson Latin American Studies and Collections and the Knight Center for Journalism in the Americas at the University of Texas at Austin will host a webinar on polarization, disinformation and the role of the press in protecting democracy and freedom of expression in the region.

“Journalism in Times of Polarization and Disinformation in Latin America” will take place on Nov. 9, 2021 from 2 to 5 p.m. U.S. Central Time. on Zoom. 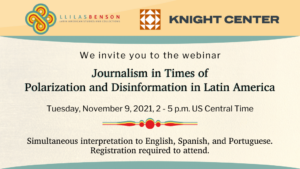 The event is free and open to the public, but registration is required and open now! You will need an account on Zoom to participate, but if you don’t have one, it takes less than a minute to create one for free.

The webinar program and the list of speakers are available.

“As social media communications expand and evolve at unprecedented speed, a forum for discussion and exchange between journalists and academics becomes essential to critically reflect on the practice of journalism in contemporary Latin America,” said Adela Pineda Franco, director of the Teresa Lozano Long Institute of Latin American Studies.

The three-hour webinar will be streamed live on Zoom, with simultaneous interpretation to English, Spanish and Portuguese. Access to the program is free. Also at no cost, those who attend most of the webinar will be able to obtain a certificate of participation.

Speakers will include accomplished academics and journalists from Latin America and the U.S. to talk about how polarization and disinformation are affecting both society and the press, and how journalism is responding.

“These have been difficult times for democracy and press freedom in many places in Latin America, so the Knight Center joined forces with the Lozano Long Institute of Latin American Studies to offer this opportunity for reflection and discussion with journalists and scholars,” said professor Rosental Alves, founder and director of the Knight Center.

“We are grateful to the stellar lineup of speakers for this program and we hope to attract the participation of people from all over the hemisphere interested in these topics,” Alves said.

This webinar is part of the Harte Lectureship Series of the LLILAS Benson Latin American Studies and Collections.

Knight Center for Journalism in the Americas

Founded in 2002, the Knight Center for Journalism in the Americas in the Moody College of Communication at the University of Texas at Austin offers training and programming to keep journalists around the world up to date with the digital revolution. Its online course program, Journalism Courses, has reached 260,000 students in 200 countries and territories around the world. It’s trilingual digital magazine, LatAm Journalism Review, reports on journalism and press freedom in Latin America and the Caribbean. And its International Symposium on Online Journalism (ISOJ) convenes thousands of journalists, media executives, academics and students to discuss the present and future of online journalism.