Local journalists are in direct contact with the facts and sources, which can be a double-edged sword.  On the one hand, proximity allows for greater understanding and the creation of stories more in line with reality, but on the other hand, greater physical and economic risks are taken.

There is currently a trend in journalism to recover the closeness and emotional relationship with society by turning back to the local and hyperlocal. This is a result of the credibility crisis suffered by mass media due to the lack of empathy and neglect of their audiences, journalist Olga Lucía Lozano states in the book "Innovation and local journalism in Latin America," developed by the Gabo Foundation and Google News Initiative.

Due to this crisis, countless local news outlets and new independent initiatives aimed at specific niches have emerged in recent years in Latin America. However, the journalists working in them face daily challenges that are very different from their counterparts in capital cities.

LatAm Journalism Review (LJR) asked journalists around Latin America, who are part of both traditional local media and hyperlocal digital ventures, to learn about the pros and cons they face in practicing journalism away from big cities.

One of the advantages of local journalism is the proximity and easy access to sources. Colombian journalist and founder of Contratopedia Caribe, Tatiana Velásquez, practices her profession from Barranquilla (located more than a thousand kilometers or 620 miles from Bogotá, Colombia's capital).

"The most wonderful thing about doing regional journalism is to be in direct contact with the facts, without the mediation that can occur when reporting from Bogotá," Velásquez told LJR. "For example, if you are in Bogotá and you need to understand why there is a food problem in a certain community, you have to figure out additional logistics to travel and contact sources that can help you understand that fact. When you live in the [countryside] regions, covering facts as part of your work routine, not only do you have direct contact with sources, but it’s also easier to understand the narrative and informative thread of the story," the journalist said. 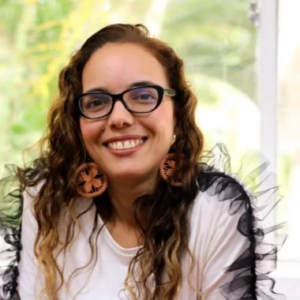 The journalist from Barranquilla (Colombia) Tatiana Velásquez assures that one of the advantages of local journalism is the proximity and easy access to sources. (Photo: courtesy)

Journalist Adrián Pino, co-founder of Datos Concepción, a local project in northern Argentina that promotes journalism and open data, agrees on this point.

"The advantages of local journalism are easy access to sources, availability of information and having an insight into everyday problems more easily," Pino told LJR.

Access to certain sources, at the local level, has also improved as a result of the pandemic. It is now easier for local journalists to do stories with a national focus or to contact expert sources, no matter where they are located. "The pandemic helped to contact sources that previously could only be approached in person. Now a lot can be done by zoom or telephone," Alejandra Padilla, a journalist based in Puebla, Mexico, and co-founder of the digital news outlet Serendipia, told LJR.

Padilla began her journalism career in Mexico City, always with a national focus. When she moved to a small town she began to see other ways of practicing the profession. "The advantage of working outside the capital is that you learn about other agendas, you open yourself to other topics and other ways of doing things," she said.

That proximity to the environment and the community that local journalism boasts can help bridge the gap on complex issues that seem distant or alien to the big cities. "The [countryside] regions offer local stories that work as an X-ray of the entire country," Venezuelan journalist María Ramírez Cabello, who works in Southern Venezuela, told LJR.

"The difference, and we have seen it for years in Venezuela, is that in the regions the crises are experienced in advance, so they are deeper. Doing journalism in that context of proximity to reality is an advantage. Journalists do not arrive in the region, carry out coverage and leave. Journalists live in the midst of what is happening, they experience it and stories emerge from their own environment," Ramírez said.

We have a saying that goes "small town, big hell," which means that in small towns, or small places, where everyone knows each other, negative information circulates faster. This also applies to journalism.

"In journalism at the local level some sources may not want to talk because there is great closeness, tight kinship and in general people know each other. Especially when you do investigative journalism, it becomes complicated to obtain testimonies or allegations," Pino said.  Local journalists and their sources are exposed to risks that may include political intimidation, threats from criminal gangs or outlaw groups, etc.

"When you cover certain topics you have more exposure, in terms of security. The risk is greater when you live in the same territory, than if you report for a few days and go [back] to Bogota or another city. When you live in the same region where you work, especially in a country like Colombia, there are major risks," Velásquez said while listing the negative aspects of local journalism. "In Colombia, which for decades has been an unsafe territory for the practice of journalism, any threat, no matter how simple it may seem, is not to be taken lightly," she added.

To minimize risks, the journalists recommended training on how to report in hostile environments, use geolocation applications when doing field work, clean electronic equipment (phones, laptops, etc) regularly, use encrypted applications for messaging or email communication, follow responsible journalistic practices, among others.

Another difficulty in doing local and hyperlocal journalism is access to funding. The advertising and commercial market is small and grant opportunities are not constant.

Journalist Raquel Zapien, director and founder of Son Playas, an environmental journalism news outlet in Mazatlan, Mexico, explains how difficult it can be to create and maintain a hyperlocal news outlet. "At Son Playas, I don't have staff or funding. I produce most of the content and work with a marketing agency to cover the expenses generated by the news portal. I am currently trying to implement a business model for the project to survive. I also have a group of collaborators who participate with opinion articles without any remuneration," she told LJR. 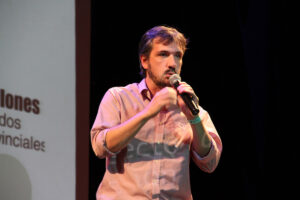 Adrián Pino, co-founder of Datos Concepción in Argentina, believes that alliances with other media and organizations are key to overcoming financial difficulties. (Photo: courtesy)

In this sense, the journalists interviewed for this feature story agree that alliances with other media and organizations are key to overcoming financial difficulties.

"One way to avoid economic asphyxiation is to collaborate and understand that local problems are connected globally. Corruption at the local level has very similar characteristics to what happens at the regional, national or even global level," Pino said.

Another disadvantage pointed out by the journalists consulted is the backwardness of some local government entities in terms of transparency and access to public data. This is not only the case in countries with clear deficiencies in terms of access to public information, such as Venezuela or Nicaragua. It also happens in Mexico, Colombia, Argentina, among others.

"At the local level in Argentina, data availability is almost nil. There is very little digitized information and requests for information are not a frequent practice. Governments do not respond or do not even have the data. Particularly in Datos Concepción we have worked a lot with the local government precisely by making public procurement data available to facilitate the work of journalists," Pino said.

The problem of access to public information appears to be structural and can affect both local and national journalists. Small government entities usually do not have the information in the requested formats. "The issue of access to public information is often difficult, but I would say that it has more to do with the local territorial entity than to the fact that a local person is requesting it. There are also problems of timely response if the journalist is from Bogotá," Velásquez said. "Getting the data is in part what is more difficult for a local journalist, and you have to struggle all the time to get information in a timely manner.