Food is basic to human survival. However, few people know the process through which each fruit, vegetable or product has to go through to reach supermarkets or stores and from there to our table. This premise was the inspiration for Grow, distribute and eat: The road to food sovereignty, a journalistic investigation promoted by nine media outlets in five Latin American countries (Argentina, Peru, Chile, Ecuador and Venezuela).

"Our initial question was how many people make it possible for us to eat an apple, a tomato, a carrot, etc. Also how many people are involved in this and what is the process for these fruits and vegetables to reach our table," Zoila Antonio Benito, director of the Peruvian news outlet with a gender perspective La Antígona and one of the coordinators of the research, told LatAm Journalism Review (LJR).

According to the Food and Agriculture Organization of the United Nations (FAO), Latin America and the Caribbean is the most expensive region to obtain healthy and nutritious food, despite having the greatest diversity in the world.

Even so, the efforts of certain populations to promote their food sovereignty, understood as "the right of peoples, nations or unions of countries to define their agricultural and food policies," a concept coined by the international movement Via Campesina, is seldom discussed nor is it on the news media's agenda.

To carry out this research, a team of 45 people worked for 7 months. Journalists, fact-checkers, graphic designers, illustrators, audiovisual communicators and content creators were involved. The research includes three feature stories, a podcast, three videos and photojournalism pieces where the realities of the people involved in the consumption and sale of food are made visible. 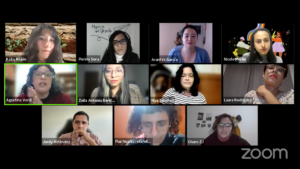 Part of the team that conducted the journalistic investigation Growing, distributing and eating: the road to food sovereignty during the official launch on August 9. (Photo: Screenshot)

"In the case of editorial, a team of journalists and reporters worked in three research areas: production, distribution and consumption. The reporters interviewed rural growers, distributors, that is, the links between producers and points of sale and consumers of products who have an awareness of self-sufficiency and ecological agriculture issues," Pierina Sora, journalist and co-founder of Cápsula Migrante, told LJR.

Stories with a gender perspective

An elderly woman farmer in the city of Cuenca in Ecuador, a producer of organic crops in Argentina and a family of honey entrepreneurs in Peru are some of the protagonists of this research.

Grow, distribute and eat is told from the experiences of women and people from LGBTQ+ populations. And, as explained in the report, much of the work of planting and production is done by women and is rarely valued.

"The protagonists of these stories are adapting and facing their own challenges. They are surviving in spaces that can many times be hostile to them because they are marked by violence or the advance of agrochemical industries," Antonio Benito said. "What better way than to do research where we can show the reality and the needs of five countries. And although these countries have different contexts, the problems are similar," he said.

Not only are the stories told with a gender perspective and feminist awareness, but the team's previous work was also guided by that philosophy. "Working as a team with a gender perspective means that executive decisions were taken such as having short meetings in order to take care of our down time, arriving at consensual decisions and visions, and self-care. These equitable task decisions are also a feminist way of approaching work versus the traditional vertical structure of work," Nicole Martín, co-founder of Revista Colibrí in Argentina and another of the coordinators of this work, said during the launch press conference on Aug. 9.

Regarding the research findings, the researchers highlight that despite stereotypes, women and people of sexual dissidence do participate in the cultivation, they organize and manage the food of their communities. Also, although the participation of the LGBTQ+ community is not as visible in the area of food distribution, there are laws that protect their labor rights. Finally, the team's leadership highlights among its findings that there is a need to create policies that can feed populations from production on.

Collaboration as a pillar

The nine media outlets that worked on this research are part of the LATAM Coalition, an initiative of Factual / Distintas Latitudes, which according to its website, seeks to boost the growth of media founded by young journalists, as well as to add value to content and audiences. 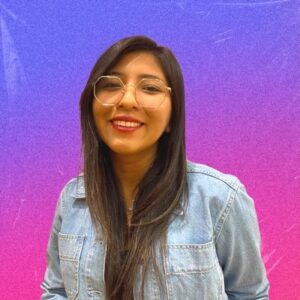 Zoila Antonio Benito is the director of the Peruvian news outlet with a gender perspective La Antígona and one of the coordinators of the research (Photo: Courtesy)

"The news outlets that participated in this research believe in collaborative journalism. It is an issue of regional outlook and doing it this way provides a greater reach to audiences," said Antonio Benito. "Besides, one news outlet does not necessarily have to be in competition with another," she added.

The LATAM Coalition was created in 2021 and its objectives have been to generate editorial alliances between new outlets in the region, exchange experiences between young entrepreneurial journalists, promote media and information literacy within and outside their teams and experiment with a common financial sustainability model.

"Cápsula Migrante decided to be part of this research because in addition to belonging to the coalition since its inception, we share the belief that the path of independent platforms can be traveled collectively," Pierina Sora told LJR.

The research was supported by the Howard G. Buffett Fund for Women Journalists of the International Women's Media Foundation, who believed in this project," said Antonio Benito.  "’Grow, distribute, eat’ is a collaborative, transnational and decentralized project. It gives us a new perspective on the journalism being done in the region."