Journalists of the Americas use collaboration as a weapon against disinformation

"Collaboration is our most effective weapon against disinformation and transparency is our shield against mistrust," with this sentence journalist Laura Zommer, co-founder of Factchequeado in the United States and CEO of Chequeado in Argentina, kicked off and closed the series of master classes 'Disarming Disinformation' for journalists investigating the funding behind disinformation.

Zommer was in charge of introducing each of the speakers and moderating the conversation. The classes took place on Nov. 17 and 18 with the support of the Knight Center for Journalism in the Americas in collaboration with the International Center for Journalists (ICFJ). They were conducted online and were simulcast in Spanish, English and Portuguese.

"It is an honor for us to be part of this event. Many people came to think that disinformation was something organic, but it is something organized and with very clear purposes," said Professor Rosental Alves, founder and director of the Knight Center for Journalism in the Americas. "Patricia, Craig, Claire and Giannina are a dream team. They are extremely qualified people to teach these classes. We are honored to have them here and to participate with ICFJ. Let's rock and roll," added Alves at the beginning of the event.

LatAm Journalism Review (LJR) attended the classes and brings below a summary of the most important points discussed.

How disinformers are financed

Craig Silverman of ProPublica in the United States listed and explained each of the sources of revenue for disinformation websites.

These include display ads, content ads, sponsored content, memberships and donations (these are important because they can reveal information about people in companies). There are also the so-called "undisclosed" funders that can be individuals, shell companies, states, or state-linked entities. And these can be more difficult to identify and prove their identity. 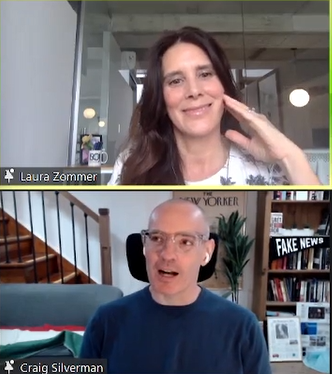 Silverman explained to the master class participants that special attention should be paid to the donation buttons on these disinformation sites because they can provide valuable information.  "Through the donation button of one website, we can find another site linked to it...Make note of the payment service being used, click on the donate link to see if it reveals more about the email address, company name, or individual receiving the money. Sometimes there is a name, an email address and you want to gather as many email addresses as you can," he said.

He also gave a guide of steps to follow to identify whether Google is monetizing video ads. First, you have to go to the disinformation website to investigate and see what advertising comes up. Second, see what the company states about its advertising relationships by reviewing the ads.txt file. And finally, use ghostery to confirm the relationship.

To conclude his presentation, Silverman taught the key questions to ask to track advertising revenue and follow the money tied to disinformation.  Some of these questions are: How does this person or publisher make money? Who are their partners? Which are direct relationships and which go through intermediaries? Do they go to great lengths to hide or be stealthy about making this money?, among others.

Disinformation in the Brazilian elections

Patricia Campos Mello, a journalist at Brazil’s Folha de São Paulo, talked about the complexity of the disinformation system in Brazil and, specifically, the use given to social media during the 2018 presidential campaign in that country.

Campos Mello gave examples of journalistic investigations showing how the team of Brazil's outgoing president, Jair Bolsonaro, used Whatsapp (the most popular messaging system in Brazil) to obtain political information and send false information to aid his campaign.  She also spoke of the participation of marketing agencies from Spain in the sale of telephone numbers with lists of voters by segments.

"It was very difficult to stop or control this disinformation. Any politician or businessman could hire a Spanish agency that provided the list of phone numbers and no money passed through Brazil," Campos Mello said.

The Brazilian journalist advised her fellow journalists to seek partnerships with universities that are investigating disinformation on Whatsapp, since seeking allies is more efficient than starting an investigation from scratch.

According to Campos Mello, during Brazil's 2022 presidential elections, monitoring fake news became more difficult because there were no longer only Whatsapp groups but also short videos on Youtube, Tik Tok as well as a large universe of fake web pages that present themselves as unbiased news sites.

"Without a doubt, researching disinformation became more complex. The flow grew, the volume is bigger and the universe has multiplied," Campos Mello said. "We saw in recent years that both Google and Facebook have limited the segmentation of the targets of political propaganda so there’s not the disinformation there was before. I believe that in the coming years we’ll see more use of streaming for political propaganda".

Focusing on the narrative

In the case of researcher Claire Wardle, from Brown University in the United States, her presentation focused on the importance of focusing more on the narrative level of disinformation than on the individual. That is, not to focus so much on a particular content but on the narrative behind that content.

To explain this issue she gave two examples. The first, the messages of the anti-vaccination community for Covid-19, which did not actually emerge in 2020 but had been building its base for years. “Anti-vaxxers didn't just emerge in 2020. They have been around for 20 years, if not longer. The anticovid vaccine community had a very strong foundation to work with, that is why it was so successful during the pandemic.” 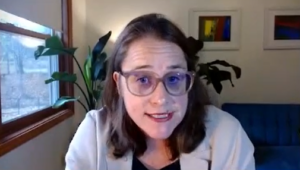 Journalist Claire Wardle (Brown University) invites us to focus not so much on a particular piece of disinformation content but on the narrative behind that content.

The second case is illustrated by the assault on the U.S. Capitol in 2021 following tweets by former President Donald Trump. The focus, according to Wardle, should not be solely on Trump's post-election messages. Trump had spent years creating a narrative that U.S. elections were not safe by creating a climate and a basis for an assault.

In addition, the media had also contributed to it. According to research by Wardle, in his last year in office, Trump's tweets had spent a total of 32 hours on cable television screens.

So the media also plays a role in amplifying fake news. "We have to recognize that bad actors are looking to take advantage of journalists to get that legitimacy and to drive search queries," Wardle said.

"We tend to study the atoms of content. We study this YouTube video, this Facebook post, this tweet. That's how we understand this. But we have to be better. Understanding the ways in which those individual atoms make up narratives. And narratives are the way that people make sense of the world. But it's harder to study narratives, and so we end up playing Whac-A-Mole with the individual examples, as opposed to understanding how it all fits together."

The last speaker in these master classes was journalist Giannina Segnini, director of the Master's Program in Data Journalism at Columbia University's Graduate School of Journalism.

Segnini does not specialize in fake news per se, but through her research she has seen how the powerful in the region use disinformation techniques to achieve their goals.

According to the Costa Rican journalist, democracies are permeated by an army of digital mercenaries "who undermine the pillars of democracy with lies, moving the feelings of the masses like remote-controlled puppets, at the service of the highest bidder and in the obscurity of anonymity." She also calls them "the children of Cambridge Analytica," alluding to the company that misused personal data from Facebook to target specific individuals and manipulate undecided voters during the 2016 U.S. election.

To do so, Segnini proposes an investigative protocol where all the addresses of the person to be investigated, participation in companies, jobs, university degrees, court cases, political contributions, imports or exports, etc. should be sought.  "To see who is involved in disinformation, you have to use creativity within the sea of public information that exists."