The Knight Center for Journalism in the Americas at the University of Texas’ Moody College of Communication has just received a $4 million grant from the John S. and James L. Knight Foundation. 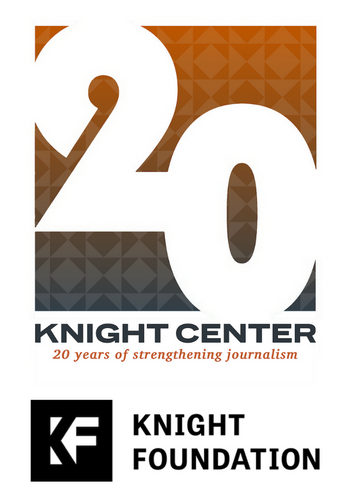 The five-year grant, which coincides with the Knight Center’s 20th anniversary, will pave the way for a sustainable future for the Center and its world-renowned programs.

With this grant, the Knight Center will reorganize, expand and strengthen its operations, building upon its 20-year track record of helping journalists elevate the standards of journalism in countries around the world.

“The Knight Center for Journalism in the Americas is at the forefront of strengthening local journalism in the region,” said Alberto Ibargüen, president and CEO of Knight Foundation. “Under Rosental Alves’ leadership, the Center has had tangible impact, creating better informed communities throughout the Hemisphere. With the continued backing of the University of Texas, Knight’s additional funding will allow it to help even more journalists now and to better secure its own sustainability.”

The grant will be instrumental in enabling the Knight Center to expand its small team of five full-time staffers, with the goal of elevating the quality and impact of its programming. The grant will directly impact the Knight Center’s three main initiatives: its pioneering online learning program, which has reached more than 275,000 students from 200 countries and territories; its annual International Symposium on Online Journalism, which fosters dialogue, research and peer-to-peer learning on the evolution of journalism in the digital era; and its LatAm Journalism Review, a trilingual digital magazine that features original reporting on the news industry and press freedom issues in Latin America and the Caribbean.

"The Knight Center is grateful to the Knight Foundation for this new generous grant, which will allow us to start our third decade from a stronger position,” said Knight Center founder and director Rosental Alves, who holds the Knight Chair in International Journalism. “We will be able to expand our services that benefit thousands of journalists in the Americas and beyond, helping them navigate these times of rapid changes in the media ecosystem affected by the digital revolution."

Alves said the grant is a reminder of the Knight Center’s accomplishments thus far and an opportunity to continue making an impact on journalists and the work they do. In its 20 years, the Knight Center has helped journalists advance in their careers by making them aware of new disciplines in modern journalism, including safety, trauma and mental health, data analysis and visualization, fact-checking, and more. As part of its 20th anniversary celebration, the Knight Center heard from countless journalists who shared stories about how they’ve become entrepreneurs and created their own news startups after participating in our programs.

“The focus of our anniversary celebration was not on what we accomplished, but on what so many journalists in so many countries have accomplished thanks to our programs,” Alves said. “Now, with the generous support from this new Knight Foundation grant, we are confident that we will be in a better condition to assist more journalists in the Americas and other parts of the world who are interested in improving the quality of journalism in their countries.”

“We are eager to build upon this impactful work, which aligns with the Knight Foundation’s efforts to promote journalism excellence in the digital age,” said Mallary Tenore, associate director of the Knight Center. “This new grant will equip us with the resources we need to continue providing journalists with free and low-cost training, events, and publications that they can’t find elsewhere.”

Throughout the years, the Knight Center has also received funding from other foundations, corporations and like-minded organizations. Moving forward, and with the Knight Foundation’s support, the Center will continue to diversify its revenue sources in the interest of becoming more sustainable.

Thanks to the Knight Foundation’s $4 million grant, the Knight Center will be well-positioned for organizational resilience and better-equipped to carry out its mission in the years to come.

“The Knight Center has had an immeasurable impact on the field of journalism across the world in the past 20 years,” said Moody College of Communication Dean Jay Bernhardt. “With this generous gift, I am excited to see what they will accomplish in the next 20.”