Join the Knight Center for Journalism in the Americas Tuesday, Aug. 2, for a free webinar as we launch a free multilingual ebook on journalist safety in Latin America and the Caribbean.

Experts on the topic will come together for a discussion on the current situation of violence against journalists in the region and measures to protect the press. 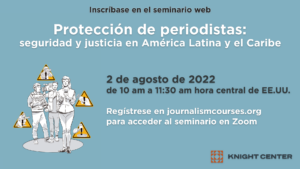 “Protection of Journalists: Safety and Justice in Latin America and the Caribbean,” the ebook soon available in English, Spanish and Portuguese, is a compilation of articles produced over the course of eight months by members of the Knight Center’s digital magazine, LatAm Journalism Review, and journalists from the region.

The four-part project focuses on: 1) coverage of protests, 2) reporting on violent conflict, 3) development of protection mechanisms, and 4) investigation and prosecution of violence against journalists.

The 15-story project, edited by Mexican journalist Javier Garza and coordinated by The Knight Center’s Teresa Mioli, presents country case studies and never-before reported details of violence targeting press professionals. It includes guides on how to stay safe while reporting on protest and violent conflict. And, it looks at delays in setting up systems to protect journalists, as well as flaws in the offices meant to prevent impunity.

“This is one of the most complete assessments of the risks journalists face and the systems designed to protect them, but from the perspective of the journalists themselves and how safe they are in their own countries," Garza said.

The project was made possible thanks to funding from UNESCO’s Global Media Defense Fund.

“We are grateful to UNESCO’s Global Media Defense Fund for its support to enable us at the Knight Center to work on this project that has helped journalists in Latin America and the Caribbean with useful information about their safety and ways to fight against impunity,” said professor Rosental Alves, Knight Center founder and director. “We have helped journalists to understand many aspects of the problem of violence against the press in the region, but we have also highlighted the need for justice, the end of impunity.”

Register today for this important webinar and join the discussion on journalist safety in the region.