Migration processes are complex.  However, more and more journalists are being trained to describe and better understand migration issues. One example is the International Conference on Migration and Development Journalism, which took place Oct. 5, 6 and 7, 2022, in the city of Merida, Spain.

In the fifth edition of this event, more than 100 journalists from around the world gathered to talk about journalism and migration, as well as to network and collaborate. The conference was organized by Por Causa, an organization that, according to its website, is made up of "a team of experts, researchers and journalists addressing migration issues from a unique framework that allows us to understand what is happening and proposes feasible alternatives to the current model."

The event was also supported by AEXCID, the International Cooperation Agency that manages the policies of the Regional Government of Extremadura (Spain) in the areas of cooperation, peacebuilding and humanitarian action.

"We gather here to talk, but also to listen. There is a willingness to listen to what others have to share. From that starting point real bridges can be built, which is the goal of this conference," said Eileen Truax, aMexican journalist specializing in migration and  conference content director, during the closing ceremony.

The congress had approximately 16 panels that were also broadcast live on Youtube. LatAm Journalism Review (LJR) covered the event and the following is a summary of the most important presentations by Latin American journalists in attendance.

One of the panel discussions during the event was an interview conducted by David Jiménez (Spanish journalist and writer, columnist for The New York Times) with Óscar Martínez (Salvadoran writer, researcher and journalist, editor-in-chief of El Faro).

Martínez began the conversation by saying that, on this occasion, he was not going to give an optimistic speech since, just a few hours ago, the El Faro team had had to evacuate another journalist from El Salvador as a result of the government’s siege and threats against the press. 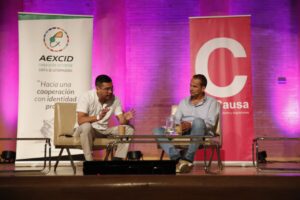 Oscar Martínez and David Jiménez during their conversation at the International Conference on Migration and Development Journalism (Photo: Courtesy).

"Some of the journalists that we have preventively evacuated from the country is because they received a summons from the elite division against organized crime. That means they want to accuse us of being gang members and, in El Salvador, if you are accused of being a gang member, with the [recent] legal reform, you can spend up to 30 years in prison without a trial," Martínez said.

Many people from El Salvador leave the country fleeing violence.  According to the United Nations (UN) more than 1 million 600 thousand Salvadorans live outside their country. And although El Salvador has not reached the levels of Nicaragua, where the majority of journalists live in exile, Salvadoran press workers are increasingly at risk, according to Martínez.

"The decision to leave the country for journalists implies a deep and honest personal evaluation that must necessarily be checked against with people you trust. In this way, you avoid a percentage of failure," said the editor-in-chief of El Faro.

Martínez admited during his participation in the conference that he had never been as frustrated with journalism as he is today. He also said that two feelings that have affected him and other journalists in his country are: frustration and anger. "And those two feelings make it very difficult to make right decisions (such as leaving the country and becoming a migrant)."

Truax also spoke on the topic of journalists who in turn become migrants at another panel discussion. For the Mexican journalist, it is important to open doors for migrant journalists so they can continue to practice their profession outside their countries. "How many migrant women and men are there? Newsrooms need to be diverse to create new narratives," Truax said.

Mexican writer, researcher and journalist Marcela Turati was interviewed during the conference by Gumersindo Lafuente of Eldiario.es.

Turati has been documenting and covering issues of the disappeared in Mexico for years. But, at the same time, she has created workshops and support groups to protect journalists who face extremely tough issues and carry a heavy psychological burden on their backs. Turati has sought ways to protect herself and to help other journalists learn to deal with their own pain.

"For many years, we journalists have founded collectives to take care of others and teach others to take care of themselves. We take classes in digital safety, physical safety, protocols for entering dangerous areas, etc. But, for several years we saw that we were missing the other big part, which was the psycho-emotional part," Turati said. "If you are not well or you are not handling the accumulated impact of working or living in an area of violence, you are very much at risk," Turati said. 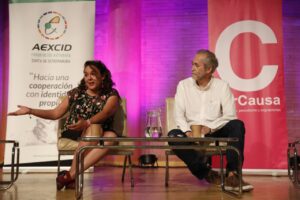 Mexican writer, researcher and journalist Marcela Turati was interviewed during the conference by Gumersindo Lafuente of Eldiario.es. (Photo: Courtesy)

Turati said that the big problem in Mexico is that there has been no "after" trauma. Since 2006, with the beginning of the so-called "war on drugs," there has been a process of violence and tension in the country that has also affected journalists. "There is always talk of post-traumatic stress, but the problem is that in Mexico we have not had a ‘post.’"

Mexico is the most dangerous country to practice journalism in the world, according to Reporters without Borders. Recently it came to light that Turati was one of the people spied through the Pegasus malware, a program that is installed in cell phones and is capable of taking almost absolute control over them.  In Mexico, the Pegasus data leak revealed that more than 15,000 phone numbers of journalists, activists and human rights defenders were tapped.

"Networks save. Feminist networks have always saved me. I believe in this collective and collaborative work where you are not alone and where we all take care of each other," Turati said. She was alluding to the Red Periodistas de a Pie, an organization made up mostly of working women journalists, which seeks to raise the quality of journalism in Mexico. "Journalism is shared work...to defend journalism is to defend life."