A campaign led by 18 associations of media organizations from all over the American continent began this Sept. 21 with the purpose of obtaining payment from digital platforms for content.

Through the Declaration “Media of the Americas Call for the Defense of the Values of Professional Journalism in the Digital Ecosystem" the signatory organizations, representing at least 40,000 media, make a vehement call to "supranational organizations and the region’s countries to put on the agenda and prioritize the vital issue of the value of journalistic content on digital platforms, ensuring conditions for fair and reasonable remuneration.” 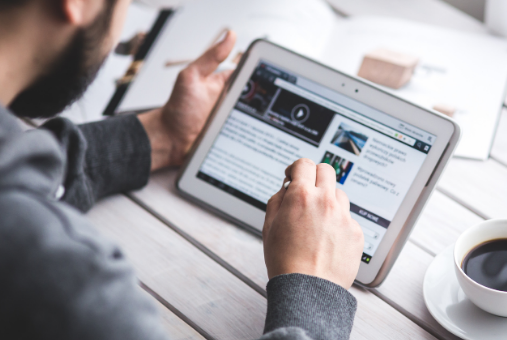 According to the statement, although "media have more significant audiences than ever before,” “intermediaries that account for more than 80 percent of the world’s digital advertising now absorb the resources used to finance professional journalism.” This situation, according to the declaration, means that the “sustainability of journalism is at risk.”

For Jorge Canahuati, president of the Inter-American Press Association (IAPA) – one of the signatory organizations that has led this initiative and which represents about 1,300 publications from the Western Hemisphere – the issue of the value of content not only dates back years but it is universal and concerns all media regardless of origin or size.

It is for this reason, as he told LatAm Journalism Review (LJR), that organizations found themselves with the need to “express our principles in the face of the vulnerability of the media in the digital context, in which we see how the informational value we generate is capitalized by other actors.”

The "fair and reasonable" remuneration, indicated in the statement, is only achieved through an agreement between the two parties, Canahuati said. This agreement, he continued, is not possible if there is not sufficient and transparent information regarding issues such as the benefits received by those who use the content or the audiences they reach, to name a few.

The statement also mentions other issues related to the digital ecosystem, and that the organizations consider should also be placed on the public agenda for debate: advertising concentration and algorithms.

Regarding advertising, the statement indicates that it is "essential" to avoid abusive practices. As it points out, the platforms “are both referees and prominent players,” and adds that when these abusive practices take place, they must be investigated and punished.

For the signatory organizations, the issue of algorithms is vital since they condition the distribution of content and therefore its arrival in society.

"Ultimately, we want this statement to be a stimulus to create a broad public conversation between platforms and the media and society in general," Canahuati said.

The declaration makes mention of different initiatives approved or under study in some parts of the world. One of them is the Code of Negotiation of Digital Media and Platforms approved in Australia on Feb. 25, which establishes “compulsory arbitration mechanisms” to ensure that platforms pay the media. It also points to the Digital Markets Act that is under discussion in the European Union as well as the authorization that the News Media Alliance is managing before the United States Congress to be able to negotiate directly with the platforms.

“We hope that the platforms will accelerate their media support programs and, also, make them more inclusive, so that they benefit not only, and in a limited way, the largest publications but also those that cover small communities that need to stay incorporated into democratic life,” Canahuati said.

The "news deserts", which have also increased due to the closure of local media as a result of the economic crisis, are precisely mentioned in the statement. And for this reason, according to Canahuati, a "more equal" treatment between media and platforms is being requested.

"Therefore, we are also asking for a fair appreciation of journalistic values in the digital ecosystem," Canahuati said. “This is an essential issue for democracy. This, as we can all understand, could never exist without professional journalism that brings to light the problems that different sectors of a society want to keep hidden."

Both the statement and Canahuati acknowledge some attempts by the platforms to value journalistic work, as well as the impact they could have on the distribution of quality journalism.

"We recognize that Google and Facebook launched content licensing programs for specific products in some countries, as well as other financial aid initiatives for media across the continent," Canahuati said. “These are steps in the right direction, but they still need to be extended to more countries in the region and to more media within each country. And the values are still far from being proportional to the benefits obtained by the platforms.”

The declaration from the journalism associations ends by calling for compliance with one of the principles established in the Declaration of Salta of the IAPA to achieve a balance between freedom of expression, copyright and intellectual property, among other points.

“We need to promote a healthy and balanced digital ecosystem, so the lack of transparency of the algorithms does not end up deciding what information is relevant to a person or a society and in which disinformation can be fought with professional and quality journalism. For this, sustainable news media are required to receive the value they generate to benefit the community,” the declaration ends.

In response to the statement, spokespersons for Facebook and Google told LJR that both companies will continue to work with media and organizations to strengthen journalism in the region. They cited as examples the training initiatives that both offer for journalists and other media professionals in Latin America and the rest of the world, but did not make specific mention of paying for content.

"We have been working with journalistic organizations in Latin America, including the Inter-American Press Association and other signatories of this declaration, such as ADEPA, ANJ and WAN-IFRA, to help build a sustainable industry," said Claudia Gurfinkel, head of news partnerships for Facebook in Latin America.

“News outlets share their content on Facebook to increase the reach of their stories and their websites, connect with new audiences, explore digital formats and monetize. We are investing more than a billion dollars in journalism globally and we will continue to collaborate to support the fundamental role it plays in democracy,” Gurfinkel said.

For its part, a Google spokesperson noted: “Supporting quality journalism is important to Google. We have a solid track record of working directly with many of the associations involved, helping their members grow their business and audience relationships through product efforts, content licencing and Google News Initiative programming and training. As one of the largest financial supporters of quality journalism we believe in a shared responsibility to ensure a robust future for news and are fully committed to playing our part to make that happen.”

Editorial Note: The Knight Center for Journalism in the Americas, which publishes LJR, receives financial support from the Google News Initiative to hold courses and conferences for journalists. In the past, it has also received contributions from the Facebook Journalism Project.