As a correspondent for newspaper Valor Econômico in northeastern Brazil, reporter Murillo Camarotto became an avid consumer of the local press in the main states of the region. In the five years, he was there, he noted a sharp decline in journalistic production, whose peak coincided with the boom of the Brazilian economy in the first decade of the 21st century. The ensuing economic crisis, coupled with the crisis of traditional journalism itself, resulted in a brutal weakening of local coverage.

With a trained reporter's eye, Camarotto noted a curious tendency: the departure of senior journalists from newsrooms to join the communications teams of the governments in the region. Curiosity turned into investigation and a research project conducted at the Reuters Institute for the Study of Journalism at the University of Oxford in the United Kingdom.

Published this year, the study reveals a frightening scenario, especially when one considers that the region is where news deserts are most prevalent in the country. In the ten years analyzed, from 2008 to 2018, 262 journalists left two of the largest newspapers in the state of Pernambuco, the Diário de Pernambuco and Folha de Pernambuco. Of these, 202 were located by Camarotto, who found that most of them (38%) went to work for “local authorities: governor, mayors, congressmen, city councilors, secretaries, etc.,” says the study, which is in English. 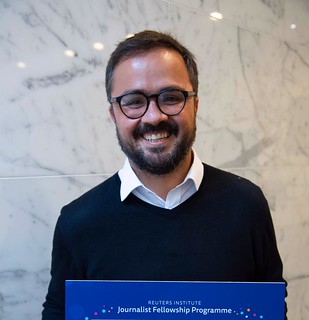 “Some of the most renowned, award-winning journalists of Pernambuco are currently working for the government and the local press is today much more docile and vulnerable than in the past,” Camarotto wrote.

The Knight Center spoke with Camarotto about the results of his research, the ill effects of the phenomenon he identified for journalism as a watchdog of power, and some suggestions for regaining the relevance of the local press. The interview follows below.

- How did the idea of investigating the migration of reporters and newspaper editors to the communications areas of government agencies in the state of Pernambuco come about?

The idea for the study came when I was a correspondent for Valor Econômico in the Northeast region between 2009 and 2014, a period of great economic and social transformations in Brazil. I consumed the regional press a lot and I could see, with the development of the crisis in the newspaper industry, a sharp drop in local coverage and the very large reproduction of national and international news in local newspapers. I did a research proposal and was selected for the Reuters Institute for the Study of Journalism at the University of Oxford.

- In your research, what did you find out about the causes that lead journalists to leave the newsrooms to go to work for the government?

They went to work not only for the Pernambuco government but also for local politicians. They were basically attracted by slightly better working conditions. A slight improvement was enough to get them out of the newsrooms. The reasons range from lack of job prospects to dissatisfaction with pay. Many also cited a growing lack of freedom, with difficulty getting critical stories published. So the offer coming from the public sector was very tempting. And most eventually succumbed to it for stability, pay, and eventually moved to the other side. The result over time has been clearly noticed on the pages in coverage.

- How do they define this 'little improvement' you mentioned?

Sometimes, a 10 percent to 20 percent wage increase [was enough]. Such a thing will not make the big difference in the person's financial life. In addition, many said in the survey that the newspapers themselves were practically driving people out. Some bosses would say to them, 'Look, if you have an offer from somewhere else, go for it, because the situation here is horrible, the newspaper can’t afford to raise, I can't promise anything.’ And then the government and politicians saw it as an opportunity to attract mainly the most critical reporters.

- It's interesting that you say that, because in the study you say that some journalists you interviewed said that now that they have left the newsrooms, it is easier to get their PR announcements in the newspaper than it was to publish their stories.

This point of research came spontaneously in the first or second interview. One journalist told me, “Compared to when I was a reporter, it is much easier nowadays to put a press release in the newspaper.” This is a bit because of the heavy [financial] dependence that newspapers have on the government, but also on the replacement of more experienced, more discerning journalists by the younger ones. He said, “Look, with my reporter experience, I can get inside the newspapers today pretty much what my client wants.” In this case, the government and the politicians.

- Of the journalists you interviewed, who often left the newsroom for a small increase in pay, how many would be willing to return if they also had some improvement in their working conditions?

There is a question in the survey that is whether they intend to return to journalism at some point and 75 percent answered that they do not intend to return to a newsroom [15 percent admit to return depending on conditions]. They speak not for lack of love for the craft, but for the complete lack of prospects. No one believes that the industry will recover to the point of being able to offer these people the minimum they want to return. A reasonable salary and a little freedom is no mind-blowing request, right? But the disappointment is so great and that was very striking during the interviews.

- The latest edition of the News Atlas shows that the Northeast is where there is the largest proportion of municipalities considered news deserts, meaning, without a single press outlet. How do you analyze this result in light of the findings of your own research?

Can you imagine taking into account local outlets that don't do local journalism? I think the number of Brazilians living in news deserts increases. This is a clear case that is in the research. Ten years ago, for example, local coverage of a regional newspaper was 60 percent in politics and dropped to 20 percent. So although in this case the outlet exists, it is no longer covering local power, it is no longer monitoring it. Funny we are talking about this [the interview was done on Dec. 14th] because we have a very recent example. Folha de S. Paulo published that the government of Pernambuco has made an accounting maneuver to allow overpayments to judges of the state court. And the two local newspapers didn't give it a single line. A person cannot live without water and without food, but without news he lives. In the long run, society gets used to living without reliable information. For me the effect on democracy is tremendous. It's a scary thing.

- Scary no doubt, but are there any possibilities? What did your research point out as ways to start recovering local journalism?

The scenario is indeed quite complicated. But we can say that there are ways, right. In the case of local newspapers, I understand that the first lesson is to be local again. Despite operational and financial difficulties, reporters have to be on the streets listening to people about community problems, overseeing power, overseeing courts and bringing in relevant information. The second step in my view is to be relevant again. It is not easy, on the contrary, but some models are already being tested in Europe and the United States, some quite successfully. In Latin America, the order of business is still to survive, but the growing trend of funding for independent journalism, for example, I think it may be a very important factor in starting a recovery in the vitality of local journalism.