Nearly 1,000 journalists in Latin America have died from COVID-19; Brazil and Peru have highest number of cases

More than half of the journalists who have died from COVID-19 globally are from Latin America, with Brazil leading the cases.

This is according to the most recent data from the Geneva-based Press Emblem Campaign (PEC), which pools data from national journalist associations, local media, regional correspondents and social networks. 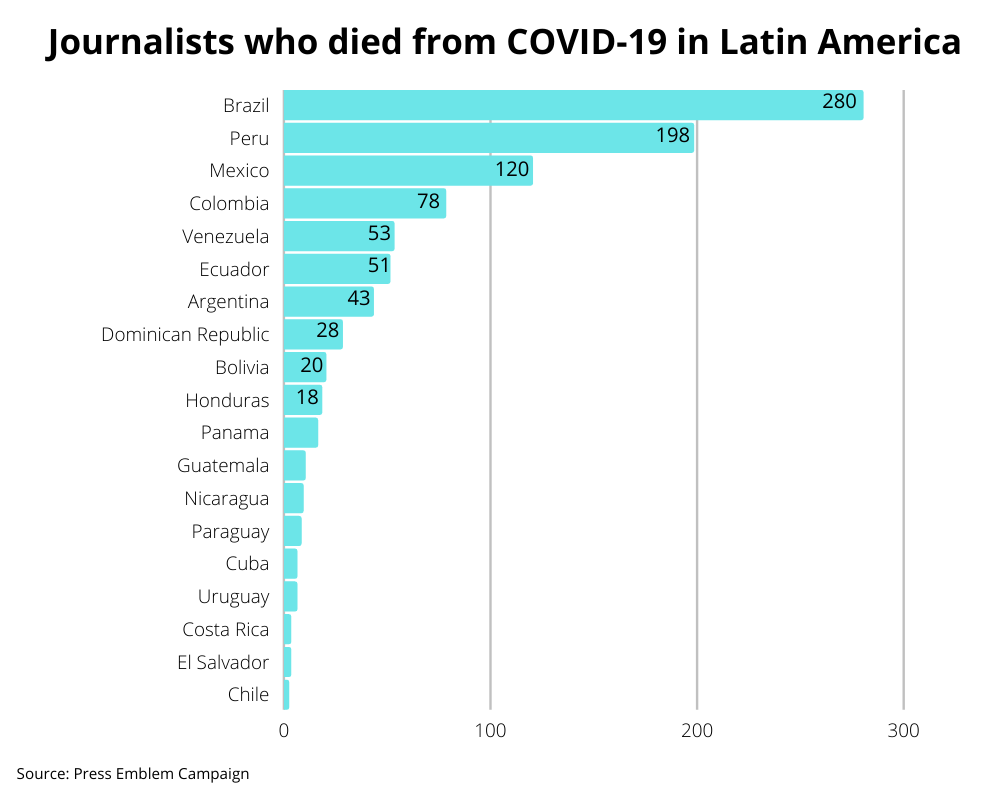 Journalist deaths grew dramatically in Brazil at the beginning of 2021 in parallel with the pandemic’s peak in the country, as María José Braga, president of Brazil’s National Federation of Journalists (FENAJ, for its acronym in Portuguese), told LatAm Journalism Review (LJR).

Globally, more than 4.5 million people have died from COVID-19, according to the World Health Organization (WHO). The Americas lead the world with more than 2.1 million of those deaths.

Blaise Lempen, PEC secretary-general, told LJR journalist associations in Latin America have done important work to raise awareness of the impact of the coronavirus on journalists, including pushing for priority vaccination for media workers.

“They advocated for priority vaccination of the media workers, but most of the time they were not heard,” he said.

“The large number of journalists who died and still die from COVID-19 in Latin America (more than 950 out of a total of 1,800 worldwide) can be explained by three factors,” he continued. “First, the inconsistent policy followed by certain political leaders; second, the still low vaccination rate of the population; third, the very precarious situation of many journalists forced to continue their job in contact with many people without sufficient protective measures."

In terms of vaccinations of the entire population, Brazil leads the region, followed by Mexico and Argentina. However, just one in four people in Latin America and the Caribbean is fully vaccinated, as reported by the Pan American Health Organization.

Journalists were included as a priority group for vaccinations by some state governments in Brazil, but not the federal government. 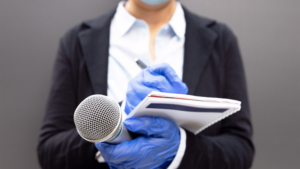 “We understand that there was an error by the Ministry of Health, because the journalists did not stop working, they were at risk and did not get the vaccine quickly enough,” she added.

In June 2021, FENAJ filed a public civil action in the Federal Regional Court of Region 1 in order to include press professionals as a vaccination priority group. In the state of Bahia, the organization, along with journalist associations, also presented an amicus curiae petition to the Federal Supreme Court to combat the Bahian public prosecutor, which was attempting to stop vaccination of journalists as a priority class.

In addition to COVID-19 deaths, Braga pointed out, “pressure at work and conditions of the home office also caused more emotional suffering.” “The situation is even more worrisome for women journalists, who, like other female workers, are more overburdened in their work at home,” she added.

In Peru, which in March 2021 had the highest number of journalist deaths due to COVID-19 in the world, there is a current “truce” with the virus in general and in terms of journalist deaths, as explained by Zuliana Lainez, general secretary of the National Association of Journalists of Peru (ANP).

COVID-19 infections are currently decreasing in the country, but as Lainez also noted, health officials are anticipating a third wave.

“One of the great concerns we had was the issue of photojournalists and reporters in the streets, because at least in Lima they are very young,” Lainez told LJR.

However, she hopes that by the time the third wave arrives and as vaccination progresses from older Peruvians to younger, this population will be vaccinated.

Despite repeated calls from ANP and other journalist associations in the country, Lainez said the federal Ministry of Health has not included journalists in priority groups for vaccination. However, some regional governments have.

“We will always emphasize how the State at no time has really valued what an essential service means in the case of journalists,” Lainez said.

Moving forward, the journalist worries that vaccination might give her colleagues a false sense of security so that they lower their guard in terms of protection. She especially points out the gaps between journalists working for private and public companies and those managing their work on their own in the country's regions, who often have to provide their own equipment.

“The union has to be daily reminding colleagues that we must not lower our guard,” Lainez said. “That our informative activity exposes us at a double and triple risk and that the pandemic is not over and that we should continue to take care of ourselves as we did the first day, even if we are vaccinated because of our overexposure to risk.”

The Knight Center emailed the ministries of health in Brazil and Peru, but did not receive a response as of publication.