The next generation of rock star journalists. This is how the winners of the One Young World Journalist of the Year Award 2022 were presented at a ceremony in Manchester, U.K., last September.

This organization, based in the United Kingdom, brings together young leaders from around the world to develop solutions to social problems, regardless of the field in which they work.  This award, created in 2020, seeks to honor five young leaders who have had a positive social impact through their work and have changed the way stories are reported by empowering others.

"I was lucky to be asked to be one of the judges. The substance of the people we saw was amazing and remarkable, and the five people you see on stage have beat out incredible journalists from around the world. And we know how important powerful, independent, truth-based journalism is," said Kamal Amhed, editor-in-chief and co-founder of The News Movement. 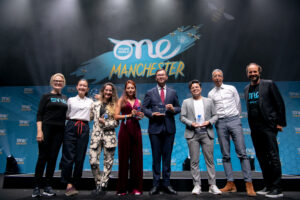 The five winners of the One Young World Journalist of the Year Award 202, along with British journalist Kamal Amhed, and presenters of the event (Photo: Courtesy)

Two of the five journalists who received the award this year are Latin American: Daniel Villatoro of Guatemala and María Paulina Baena of Colombia. Villatoro coordinates the Latin American LGBTQ+ Journalism Initiative of the International Women's Media Foundation (IWMF). His areas of work are storytelling, open data and social innovation, as well as discrimination based on sexual orientation. Baena works for El Espectador, Colombia's oldest newspaper. She is one of the creators, scriptwriters and presenters of the popular satirical video column that brings news to young audiences, La Pulla.

Latam Journalism Review (LJR) interviewed these journalists to learn about their impressions of the award, what it is like to do journalism from Latin America and the current situation in each of their countries.

Celebrating the young and innovative spirit

The panel of judges charged with choosing the winners of the One Young World Journalist of the Year Award was made up of renowned individuals with ties to the media. British journalist Kamal Ahmed; Biz Stone, co-founder of Twitter; James Chau, host of The China Current; Lagipoiva Cherelle Jackson, Pacific Islander journalist; Stephanie Busari, Nigerian journalist; and Ilia Calderón, Univision anchor and the only Latina in the group.

"They look for people who have had a social impact and not necessarily who have done a particular investigative piece. First there was a larger selection and then 15 journalists were short-listed," Villatoro told LJR. "I think the training programs I’ve done (both with the IWMF and the Knight Center), which made a big impact on me, may have influenced the award decision in my case. As well as the diversity agenda movement, pushing for the diversity agenda in Latin America," he said.

Among the 15 short-listed candidates there were journalists from all over the world: England, New Zealand, Afghanistan, Kenya, etc. 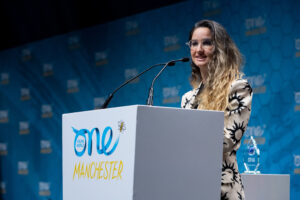 "I was encouraged to submit a resume, a short profile, and send it to London because I was told I had a chance to be among the chosen ones, but I never imagined I would be among the five," Baena told LJR.

Usually, awards that highlight a journalist’s career are received at an advanced age or after many years of experience. Therein lies the particularity of this award, which recognizes and celebrates the leadership and journalistic work of journalists 35 years of age and younger.

"Awards like these set an example for other young people who want to change things, because if you are met with a lot of resistance in the ecosystem at a young age you can lose that young, innovative spirit," Villatoro said.  "This award allowed me to reflect a lot on the career decisions I've made and what I've learned from my editors."

"Latin America is a laboratory not only of conflict, but also of journalism"

This is the first time this award has been given to a journalist from Latin America. The other three journalists who won this year's award are from Japan, the United Kingdom and Afghanistan, countries with conflicts and realities very different from those of Latin America.

For Baena, many threats to journalists and opinion leaders exist in Latin America. And, although doing journalism remains a great challenge, it is necessary to bring the region's violence to light. "Latin America is a laboratory not only of conflict, but also of journalism. We must insist on good journalism so this logic begins to shift, so that journalism truly fulfills a social function. Not only as information, but also to make better citizens, [who can be] more critical and committed to peace," the Colombian journalist said. 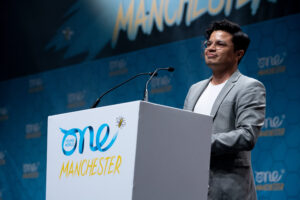 “This award allowed me to reflect a lot on the career decisions I've made and what I've learned from my editors”, Guatemalan journalist Daniel Villatoro told LJR about his award as One Young World's Journalist of the Year 2022. (Photo: Courtesy).

As for Villatoro, he believes that having received the award is due to his work with the LGBTQ+ community, but even more so because he is doing  his work in Guatemala. This is due to the country's own challenges and the minimal social guarantees it offers.

"In other environments, the LGBTQ+ [community] has made some political conquests. On the other hand, in Guatemala, the only achievements have been narrative and cultural. Politics has not guaranteed a significant political footing," Villatoro said.