In Argentina, 6,600,000 people, equivalent to 16.7 percent of the population, live in places where there is no independent press outlet, that is, in news deserts. This means that they don't have access to independent local news about the regions where they live. When there are journalists in these regions, they are usually tied to the official discourse of the local government.

The number is part of the survey News Deserts in Argentina, an investigation by the Argentine Journalism Forum (FOPEA, for its acronym in Spanish) with support from Google. Two hundred and sixty-eight departments of the country are categorized as news deserts, equivalent to 46.7 percent of all departments.

In addition to deserts, the survey classified the Argentine information ecosystem into three other levels: semi-deserts, semi-forests and forests. In the semi-deserts, there are few conditions for the production of professional journalism. They represent 141 departments in the country (25.2%) where 7.6 million people live (19.2%). Together, deserts and semi-deserts account for three-quarters of the territory and just over a third of the population. 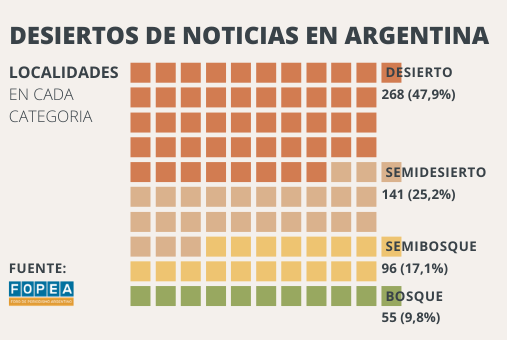 Three-quarters of Argentina's territory is categorized as a news desert or semi-desert. Infographic: LJR

In semi-forests, professional journalism exists, but it faces limitations and risks that can be serious. Coverage lacks depth and diversity, especially on issues related to the quality of local public life. The semi-forests are in 96 departments (17.1%) and reach 10.7 million (27%) of Argentines.

Forests are the best classification level. Although only 55 (9.8%) of the country's departments can be considered forests, they are also the most central and populated regions. 17.7 million Argentines (37% of the population) live in news forests.

In these regions, “there are reasonable conditions for the exercise of professional journalism, which is one that is at the service of the community. In this place, it is possible to know what is happening and, eventually, to hear critical voices, although this does not mean that there are no threats to the media and journalists,” the study said.

“Perhaps most worrisome are the cordons that surround large cities, where deserts pocket more people. In some cases, like the so-called Greater Buenos Aires, the suburbs have more population than many provinces combined. There you have governments that govern the lives of millions of people, and that have almost no journalistic control over their management. From the point of view of the provinces, those that are in the worst situation are Formosa, Chaco, La Rioja and Tucumán,” Ruiz said. 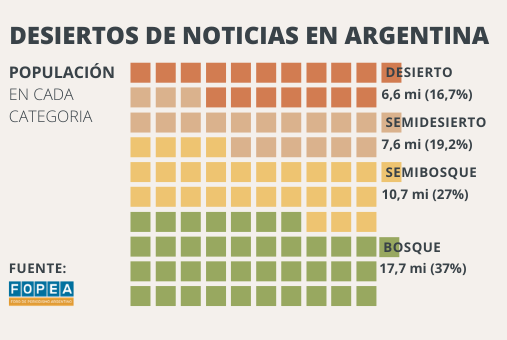 A third of the Argentine population does not have access to independent and reliable local news. Infographic: LJR

"My expectation is that, from this investigation, it will be possible to debate, using data rather than just impression, the perception that journalism is lacking in Argentina. Personally, I am enthusiastic about the idea that citizens can become aware of the existing difficulties to practice journalism professionally, and help those who work in the local sphere and maintain the service in sometimes extremely hostile conditions,” Benito told LJR.

The Argentine study was based on experiences from other countries, such as Brazil, Venezuela, Colombia, Mexico, Canada and the United States, to develop its own research methodology. Through a form, the researchers identified 2,464 media and 13,597 journalists.

“The most difficult and surprising thing: becoming aware of the lack of transparency that exists in the media sector. It is a little-known topic because, in general, the media investigate and are not investigated. In this study we find barriers to accessing the truth and secrecy that cast doubt on the democratic commitment of a significant number of these organizations, and they lead us to think of them as facades where the news is, in truth, propaganda,” Benito said.

The researchers paid special attention to the city of Buenos Aires, the country's capital and the most populous, richest and most developed city. There, researchers investigated neighborhood by neighborhood to learn about the situation of each local community. They found that 25 of the 48 neighborhoods in the Argentine capital (52.2%) are news deserts. Only 6 of them (12.5%) are considered forests.

“There we wanted to map the press of the neighborhoods in a large city. Buenos Aires has the national press, but in its neighborhoods, citizens have uneven information. Likewise, the government of the city of Buenos Aires is the only one in the country that has a system of certain promotion of the local press. My neighborhood, for example, is deserted. The news that I find out about the neighborhood on social networks is not reliable and there is no journalistic outlet that provides it,” Ruiz said.

In addition to the diagnosis, the survey also offers suggestions on how to improve the information ecosystem in Argentina. They include proposals for professional and economic training to promote the local press. According to FOPEA, the most important suggestion is the implementation of the so-called transparency clause.

“It consists of the fact that the large public contractors that carry out works or services in these areas have the obligation to inform the public, duly, by buying spaces in the local media. Until now, the information on these contracts is very little in the places where these contracts are made. So, in this way, in the areas where there is little journalism, the development of local media outlets is encouraged,” Ruiz said. “Improving the management of official advertising so that it is not a tool for controlling the work of journalists.”