In an emotional panel that at times resulted in tears from both speakers and attendees, journalists from Nicaragua explained to their Ibero-American colleagues the conditions in which journalism is done in that country within the framework of the 12th Ibero-American Colloquium of Digital Journalism that took place on April 14 at the University of Texas at Austin.

April 18 marks one year since the beginning of mass protests in Nicaragua that has led to the deepening of the human rights crisis in the country. According to figures shared by Delgado, the IACHR has recorded the death of 325 people in the midst of the crisis, including journalist Ángel Gahona, who died while broadcasting a protest on Facebook Live. The IACHR has also registered the exile of hundreds of people, including more than 60 journalists. 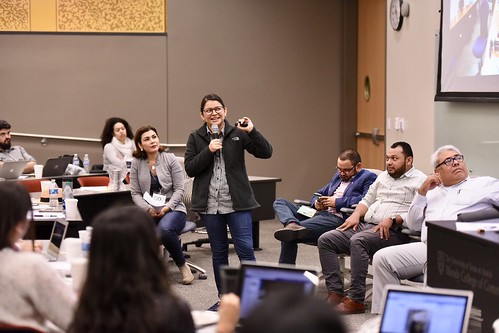 The press has been one of the targets of paramilitary forces or "turbas" as they are known in the country, according to Navarro. The journalist spoke of the different attacks suffered by reporters as well as media headquarters, and explained that at first the police were agents that, although they didn’t help the press, at least they did not attack them.

“In the last 12 months they have been acting together,” Navarro said, referring to the police and paramilitary forces.

Navarro spoke of Miguel Mora and Lucía Pineda, director and head of information of Canal 100% Noticias, who have been detained for almost four months. He also spoke of the attacks on the headquarters of different media like Radio Darío and the magazine Confidencial, now occupied by police forces.

Overcoming his emotions, Navarro said that they continue to work and improve on four fronts: improving alliances, generating more unity, continuing resisting and being supportive.

“All the colleagues are trying to fight, some from Costa Rica, others in Spain and others in the United States," Navarro said. "We will continue to resist because we believe that Nicaragua deserves it.”

Galeano, who worked for the channel 100% Noticias, explained how it is to work from exile, and the pain it represents for him to see his colleagues "with whom he shared his days" that are now in prison. After a narration of how the arrests of Mora and Pineda occurred, and from which he was saved only by "a miracle," he said that journalists in Nicaragua have three options: death, jail or exile.

From the United States, where he is exiled, Galeano continued with his program with the aim of overcoming the "information blackout" Nicaraguan citizens live within.

“Daniel Ortega and his wife have shown that they are capable of anything," said Galeano, who tries to laugh at his new workplace in the United States: a Christian station just above a sex shop.

“You have to laugh because we are fighting. Life does not make mistakes – a friend told Galeano when he went to the station – the good is above the bad," he finished laughing.

Membreño, who was also a panelist at the ISOJ, explained what she had identified as the good, the bad and the ugly in the whole situation. She, also exiled, continues working for Confidencial, whose headquarters she could not return to after it was raided and occupied by the police.

As bad and ugly, she spoke of the confiscation of her headquarters and of her materials, as well as of the repression that not just her colleagues, but also citizens who protest against the regime, live under.

But she stressed the good. She said her site, as well as other independent media, have been strengthened because she believes people have begun to understand the importance of the media for democracy.

The journalist offered figures on how the length of time on page, visits and pages views are increasing. "People are taking the time to read what we report," she said. "If this crisis has taught us something, it is that we should leave our comfort zone, and we had to move super fast."

The crisis not only generated new digital media, but also the birth of a new guild. Marín explained the organization Independent Journalists and Communicators of Nicaragua was born first with semi-clandestine meetings. Its main objectives are to achieve the survival of journalists and to continue to report from inside and outside Nicaragua.

Among the ways to improve the safety of journalists, they offer advice that includes changing routines or improving digital safety skills. They also seek to link up with other organizations around the world, and to find alliances to make budgets that allow them to continue resisting. Even meetings to learn to manage emotions, "even if we do not," said Marín laughing.

“It has been a year of so much tension, the mere fact of being able to speak, to share, with journalists from all over the world, it is exciting,” Delgado said, referring to the speakers’ tears. “In Nicaragua you can not express, there are a lot of limitations.”

At the end of the panel, and as an initiative of their own, those attending the Colloquium signed a declaration in which they not only reject attacks on the media in Nicaragua, but also demanded the release of imprisoned journalists.