This is how ‘Deliberante,’ the podcast from the Office of the Special Rapporteur for Freedom of Expression of the Inter-American Commission on Human Rights (IACHR) made its debut this past Oct. 13. 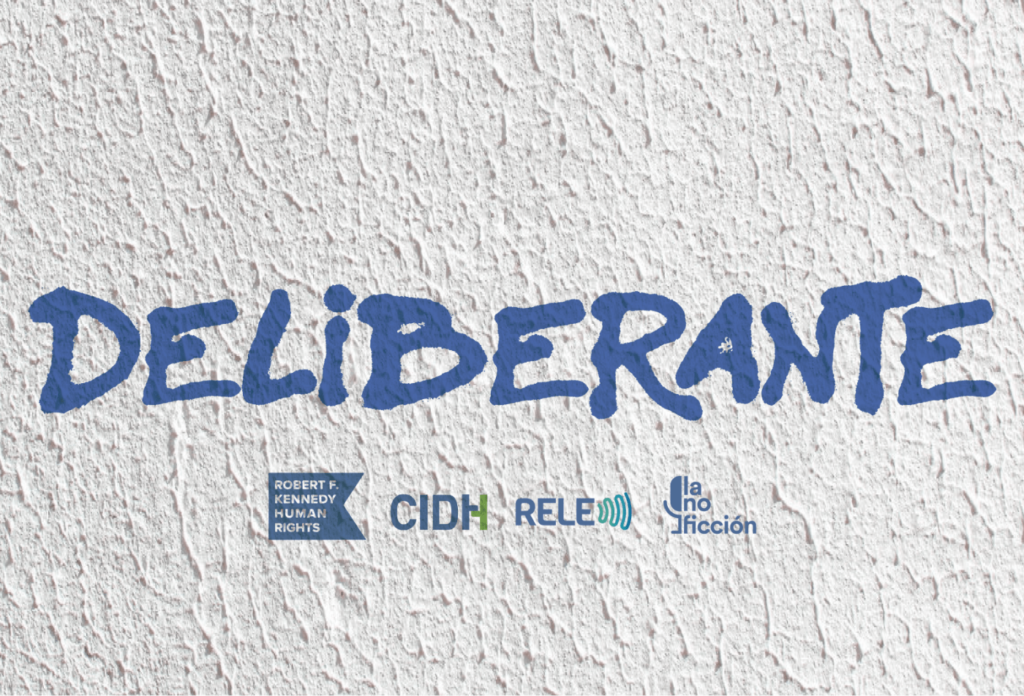 Deliberante logo, podcast from the Office of the Special Rapporteur for Freedom of Expression of the IACHR.

‘Deliberante’ (Deliberating) is a podcast that tells “stories about freedom of expression in the Americas,” which was born with the goal of bridging the gap identified by the Special Rapporteur, Pedro Vaca, when he started his role on Oct. 6, 2020.

As he said, despite the fact that, for example, the Inter-American Court of Human Rights (I/A Court) has at least 40 rulings that "have helped to better understand freedom of expression standards in the region," less-specialized audiences have not fully embraced them.

In addition, the podcast also seeks to “acknowledge the life stories which gave rise to these standards in the Americas,” Vaca said. “Many of these stories involve sacrifice. These are stories where freedom of expression was infringed or interfered with, so there’s a human dimension which helped to build the standard,” he said.

For the Rapporteur, once a case becomes a ruling, it enters the legal world of international law, that leads to "losing a certain level of sensitivity," of how it got there.

For instance, in the last of the three episodes streamed so far, the podcast featured the story of Chilean economist and activist Marcel Claude Reyes. His name is familiar to those who work in the human rights world, and synonymus with access to public information in the Americas.

The case of Claude Reyes et al. V. Chile was the 2006 sentencing of the I/A Court that established the principle of maximum disclosure. This principle states that “it is assumed that all information is accessible,” restricted only by certain exceptions that must also meet certain requirements.

The story began when Reyes requested information from the government about a forestry industrialization project which was shrouded in secrecy, including information about the company pursuing it.

In fact, the I/A Court was in agreement.

“It was a tremendous leap forward for that time,” said Juan Pablo Olmendo, the lawyer who fought the case. The ruling, for instance, expanded the right granted in European cases where this right was limited to journalists or civilian associations. In the Claude Reyes case, the I/A Court established that any citizen could access information the State held. 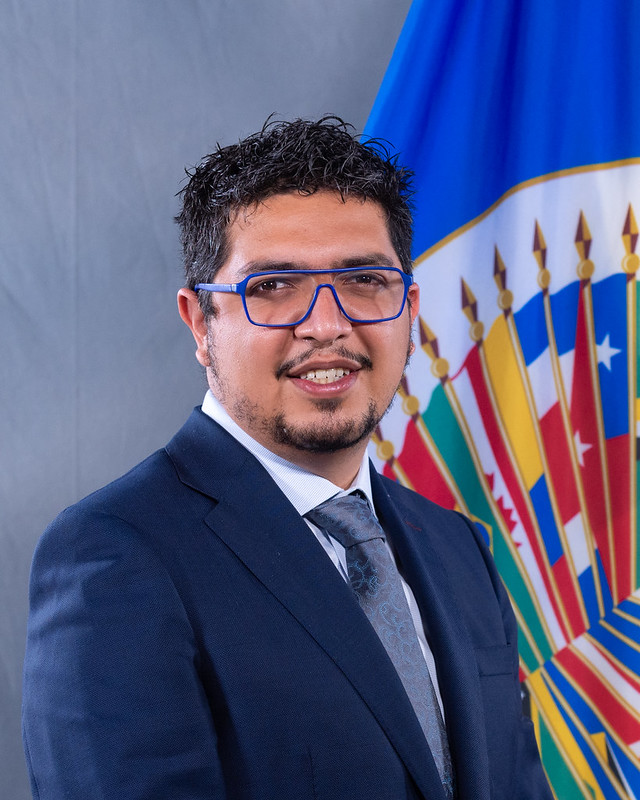 The years following the ruling also brought regional progress. The OAS pushed for the creation of public information access laws and today more than 20 countries have a law of this type.

The podcast also tells the stories of workers for the channel RCTV in Venezuela, shut down by then President Hugo Chávez. But before this decision, workers had to face stigma and violent attacks against the press. One can also listen to the story faced by the Nicaraguan press.

“We always try to have three elements in each episode,” Vaca said. “One is the process of raising awareness regarding the story where the right to freedom of expression has been violated. The second element is, based on that story, to highlight standards of the Interamerican system and especially that of the Court, which help with the analysis of the story. And the third, is to bring the case up to date, what that reflection and that history can tell us in the world of freedom of expression that we are inhabiting today.”

Work on the podcast began at the end of March, and by May they had a pilot. Given that it was a new format for the Rapporteur’s office and the IACHR, it had to go through several rounds of approval, while keeping up with the production schedule. Right now it produces an episode every 15 days, and the first season will have a total of 6 episodes.

By institutional policy, but also because of Vaca’s beliefs, the podcast aims to reflect the variety of voices and accents of the IACHR itself. Aside from him, who moderates the podcast, other members of the IACHR participate in each episode. The first episode, for instance, included the president of the I/A Court, Antonia Urrejola Noguera.

Deliberante is produced by the La No Ficción podcast house and is supported by the non-profit organization Robert F. Kennedy Human Rights. Angelita Baeyens, RFK's vice president of international advocacy and litigation, learned about the podcast project in a conversation with Vaca and her idea “resonated a lot” with her due to the work that the organization does. Work in which, through individual cases, it seeks to talk about a broader problem that sometimes covers several countries.

“And of course, the more advocacy and litigation we do as an organization, it is also clear that there is a matter of sharing and making these standards achieved by the decisions in specific cases […] so they do not remain on paper, but that people can know and can also help promote those standards," Baeyens told LJR.

For the human rights expert, who worked for years at the IACHR and who also considers herself a great consumer of podcasts, this format was a great tool to achieve that proximity with the non-expert public on the subject because it is a pleasant, versatile one and even concise.

“As a person who works in activism, in human rights, I am always, and my organization, we are looking for new ways to advocate for human rights and to try to amplify the impact of judicial decisions, decisions of the inter-American system, of the efforts of many people, defenders and journalists, so that it is not necessary to repeat the same mistakes, go through the same litigation work, for example, or the advocacy of years to achieve the same decision,” she added.

Given her knowledge of inter-American standards “with an exceptional level of fluency and legal rigor,” as Vaca explained, Baeyens helped in the podcast editing, not in the technical part, but in curating the selection of cases and decisions, as well as in the production of the scripts for each episode. She clarifies that the credit for the podcast goes to the Special Rapporteur and La No Ficción.

For the specific case of the decisions, Baeyens explained that some cases are featured because they are emblematic, but that they also sought to choose cases from different countries that are relevant today. 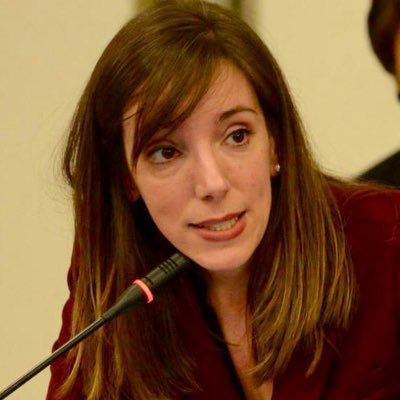 “This is because we also want to convey this idea that the cases, beyond referring to a specific country, are relevant to the entire region and are situations and problems that are occurring in different countries. […] The podcast also tries to connect it with the present. The issues to which the cases refer are current issues, issues that at this moment we are seeing as urgent,” she said.

The episodes, for example, cover topics that have to do particularly with journalists, as well as the public official’s duty of tolerance to criticism, journalistic coverage of protests and access to public information, among others.

Although it is a new product, Baeyens believes that they are going in a "good direction" to attract an audience that, although not expert, is interested in human rights, and for that reason she calls for them to give the podcast a chance.

“[We hope that] in this way they can not only learn and know more about the cases, about freedom of expression and what it means in particular to guarantee that right, but also about the work of the Inter-American Commission itself, the Inter-American Court and the the civil society organizations that are moving and doing the work very hand in hand with those who have been victims of human rights violations,” she said.

Vaca says the reaction has been very positive. For instance, in some academic sectors it has been used as study material among lawyers. He has also felt this receptivity from the podcast community that "is very fraternal." However, he thinks the most important thing about the podcast is that it highlights the life stories behind it all.

“I believe censorship also causes a lot of personal pain, and pain for families. There are life stories, life dreams that drastically changed because of incidents that later became an Inter-american standard,” Vaca said. “Beyond a ruling establishing a freedom of expression standard, there are costs. So this is a very, very, very valuable point to me.”