As it has done with most things, the current COVID-19 pandemic has made its mark on the annual celebration of World Press Freedom Day (WPFD), recognized each year on May 3 since its proclamation by the UN General Assembly in 1993.

“Journalists and media workers are crucial to helping us make informed decisions. As the world fights the COVID-19 pandemic, those decisions can make the difference between life and death,” said António Guterres, UN Secretary-General. “On World Press Freedom Day, we call on governments -- and others -- to guarantee that journalists can do their jobs throughou

t the COVID-19 pandemic and beyond.”

Press advocacy organizations, non-governmental entities and the press will hold various webinars, launch special publications and organize social media campaigns to mark the day and call attention to the importance of a free press, especially in the time of COVID-19.

UNESCO is organizing a social media campaign focused on this year’s theme, “Journalism without Fear or Favour.” Subthemes for this year’s WPFD look at the safety of journalists and media workers, independent journalism free from political and commercial influence and gender equality.

“Too often, we see interference with freedom of the press. Whether this interference involves political, ideological or economic control, defamatory attacks intended to discredit their target, or harassment, too often, it aims to silence journalists - particularly, women journalists. Unfortunately, the extraordinary nature of our present circumstances is aggravating this pressure on journalists," said UNESCO Director-General Audrey Azoulay. "The ongoing crisis is also increasing economic uncertainty for journalists."

In her statement marking WPFD, Azoulay also pointed to the importance of fighting disinformation that only exacerbates the current health crisis. She pointed out the social media campaigns “Together for Facts, Science and Solidarity” and “Don’t Go Viral,” and the creation of a COVID-19 resource center for journalists. 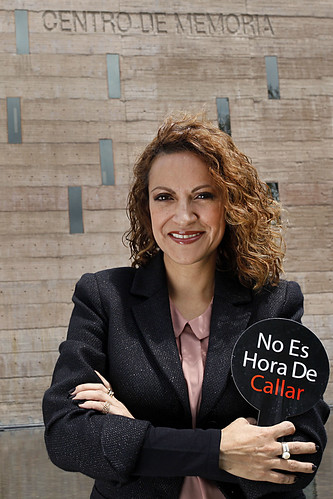 Jineth Bedoya Lima created the campaign "It's not time to be silent" in 2009 to fight violence against women. (Photo: Courtesy of El Tiempo)

As part of the celebrations, Colombian journalist Jineth Bedoya was announced as the laureate of the 2020 UNESCO/Guillermo Cano World Press Freedom Prize. Bedoya has focused on the armed conflict and peace process in her home country and has been a fierce advocate against sexual violence targeting women.

Representatives from the UN, Organization for Security and Co-operation in Europe and the Organization of American States (OAS) released a joint declaration in honor of WPFD, specifically concerning freedom of expression and elections. Their various recommendations to states included freedom from censorship and increased access to information during elections. They also called on digital media and platforms to adopt measures to ensure a diversity of political views and perspectives, as well as to address disinformation.

The president of the Inter-American Press Association (IAPA), Christopher Barnes, also released a note on the date. In the text, he celebrated that people are, during the pandemic, considering journalism and the traditional press as important sources of reliable information.

Barnes pointed out that in order to produce qualified content, journalists and editors need to do "hard work" and take risks. He reinforced that, although essential, journalists have suffered from wage cuts and mass layoffs on the continent.

“On this special day, we do not want to ignore the fact that we still live in a region where the courage of journalists is put to the test every day,” he said. “We reject the violence and impunity that surrounds crimes against journalists. Likewise, we hope that the governments of Brazil, Colombia, Ecuador, Guatemala, Honduras, Mexico, and Paraguay will strengthen systems for the protection and security of journalists with human, technical and financial resources.”

Barnes concluded the note by celebrating the work of journalists and congratulating the press professionals for their daily work, which, according to him, is one of the foundations of life in democracies.

Join the celebration of WPFD online by using the hashtag #WorldPressFreedomDay. Below you'll find a compilation of global and regional events and campaigns to mark the occasion. Do you know of any we missed? Let us know on social media: @utknightcenter.

UNESCO will be the patron of Difference Day 2020, an interactive livestreamed event on May 3 featuring guest speakers who will discuss challenges to journalism.

UNESCO will also celebrate online events from May 4 to 6 that focus on disinformation and COVID-19, media independence in times of crisis and the safety of journalists during the pandemic.

Local Latin American UNESCO offices are coordinating the May 5 event "Good fact-checking practices for journalists in times of infodemia in Latin America and the Caribbean." During an Instagram live, Latam Chequea, Salud con lupa, El Surti and Colombia Check will discuss fighting disinformation.

UNESCO Mexico, Tecnológico de Monterrey and INAI are hosting the digital seminar in Spanish “Pandemic, democracy and human rights: New challenges in journalism,” on May 6.

UNESCO in Montevideo and Quito, along with Colombia’s Press Freedom Foundation (FLIP) are hosting the event “Violence against women journalists and press freedom in Latin America and the Caribbean” on May 7. The special invited guest is Jineth Bedoya, this year’s recipient of the 2020 UNESCO/Guillermo Cano World Press Freedom Prize. She is joined by reporters Nausicaa Palomeque and Matilde Campodónico.

Register for the May 7 webinar “Press Freedom and Access to Information in times of COVID-19.” The event is organized by the Rule of Law Program for Latin America of the KAS and UNESCO, with support from the Inter American Court of Human Rights.

UNESCO Montevideo is organizing the May 8 webinar “Science journalism in the times of COVID-19” on May 8.

Violence against women journalists and press freedom in Latin America and the Caribbean” on May 7. The special invited guest is Jineth Bedoya, this year’s recipient of the 2020 UNESCO/Guillermo Cano World Press Freedom Prize. She is joined by reporters Nausicaa Palomeque and Matilde Campodónico.

Register for the May 7 webinar “Press Freedom and Access to Information in times of COVID-19.” The event is organized by the Rule of Law Program for Latin America of the KAS and UNESCO, with support from the Inter American Court of Human Rights.

UNESCO Montevideo is organizing the May 8 webinar “Science journalism in the times of COVID-19” on May 8. A link will be provided shortly.

UNESCO also teamed up with the World Health Organization (WHO), with support from the Knight Foundation and the United Nations Development Program, for a Knight Center free online course in English, Spanish, Portuguese and French, “Journalism in a pandemic: Covering COVID-19 now and in the future.” It begins on May 4 and registration is still open.

Voces del Sur
Voces del Sur is joined by various Latin American press and journalist organizations in hosting the virtual regional forum in Spanish on May 5, “Press Freedom after the Coronavirus.” Speakers are Frank LaRue, former UN Special Rapporteur on the Promotion and Protection of the Right to Freedom of Opinion and Expression; Natalie Southwick, the Committee to Protect Journalist’s  Central and South America program coordinator; and Roberto Pereira, lawyer and press freedom expert. It is moderated by Amada Esperanza Ponce, executive director of the Committee for Free Expression (C-Libre).

Fundamedios
“Disinfodemia in Latin America: Facts-19,” a virtual forum in Spanish on combating disinformation on the internet, is being hosted on May 6 by Ecuador’s Fundamedios, UNESCO, the U.S. and Canadian embassies, the delegation of the European Union and the local office of the Panamerican Development Foundation (PADF). César Ricaurte, executive director of Fundamedios, will moderate and be joined by participants Cristina Tardáguila (IFCN), Liliana Elósegui (Verificado-Mexico), Desirée Yépez (Ecuador Chequea), Luiza Bandeira (Digital Forensic Research Lab) and Marianela Balbi (IPYS Venezuela).

Proyecto Antonio Nariño is hosting the webinar “Indispensable Journalism” on May 3. It is in alliance with the Colombian Media Association (AMI), Consejo de Redacción, Fundación Gabo, Press Freedom Foundation (FLIP), FESCOL foundation, with support from UNESCO.
UNESCO and Brazilian organizations
UNESCO, in partnership with several organizations in Brazil, will promote a webinar discussing the role of the press in containing disinformation during the COVID-19 pandemic.

The webinar is scheduled for May 4 with simultaneous transmission on the Facebook page of Abraji and other organizations promoting the event: UNESCO, Brazilian Association of Radio and Television Broadcasters (Abert), Association of Education Journalists (Jeduca) and Instituto Palavra Aberta.

The debate will be attended by Marlova Noleto, Director and Representative of UNESCO in Brazil; Atila Iamarino, biologist and scientific communicator; Antônio Gois, journalist and president of Jeduca; and Patricia Blanco, president of Instituto Palavra Aberta.
Committee to Protect Journalists (CPJ)
As part of WPFD, CPJ and partner organizations are calling on world governments to release journalists imprisoned during the COVID-19 pandemic as part of the #FreeThePress campaign. An online petition has already gathered more than 10,000 signatures.

The digital ad from the Washington Post Press Freedom Partnership highlighting the case of Claudia Duque ahead of WPFD 2020. (WPPFP)

In print and digital ads during the week leading up to WPFD, the Washington Post Press Freedom Partnership has published the stories of persecuted journalists from around the world. That included the case of Claudia Duque, a Colombian journalist who has faced legal persecution and threats for her reporting ont he peace process.

International Women’s Media Foundation (IWMF)
The IWMF is using the hashtag #CheckYourBylines on social media to support women journalists and call attention to gender disparities in the newsroom. “One in three early-career women journalists consider leaving the profession due to gender-based targeting,” according to the organization.

Organized Crime and Corruption Reporting Project (OCCRP)
The OCCRP is highlighting the stories and challenges of reporters in its network during the weekend of WPFD as part of the “Facing the Fight” social media campaign. It highlighted the case of Venezuelan reporter Darvinson Rojas, who was arrested after reporting on COVID-19.

*Marina Estarque contributed to this report.