Lack of access to public information, requests for interviews denied by public officials, control of printing materials, harassment, repression and violence are part of daily life for journalists in Nicaragua.

The situation, which journalists have faced for years, began to worsen after the start of protests against the government of Daniel Ortega in April 2018. Media outlets and journalists were caught in the government's response: among them a deadly case, some injured, others detained and a large list of restrictions for carrying out their work.

It was in this context and with the objective of being able to help journalists, but above all to keep reporting what was happening in the country, that the initiative Nicaragua.Connectas was born. 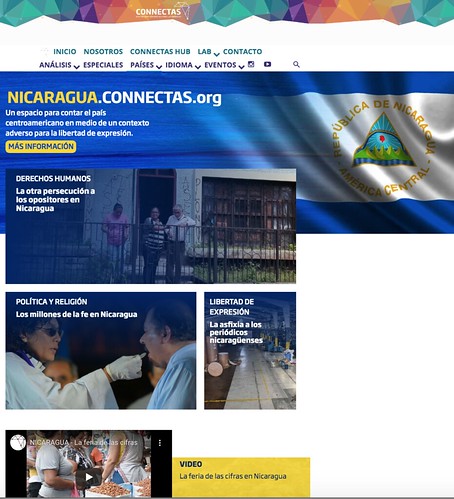 “We were already working with two allies in Nicaragua – one that is the International Center for Journalists (ICFJ) and the Violeta Barrios de Chamorro Foundation [of Nicaragua], they made adjustments within programs that they already had to think about strategies that could help prevent information from being silenced,” Carlos Eduardo Huertas, director of Connectas, told the Knight Center.

After a few months of conversation between these three organizations, the initiative began operations last March to “together build stories that would allow them to continue to tell what Nicaragua is and what is happening there today,” Huertas explained.

Through the educational support of Connectas, which is “one of the hallmarks of the organization” according to Huertas, and its residency program, Nicaraguan journalist Octavio Enriquez was contacted to be the editor of the team of journalists who report the issues from Nicaragua that do not find a home in traditional media.

“It was born as a project that seeks, from a local standpoint, to become something Latin American," Enriquez told the Knight Center. A journalist with more than 20 years of experience, winner of awards such as the Ortega y Gasset and the King of Spain, and editor of the newspaper La Prensa de Nicaragua, Enríquez was chosen as this year's journalist-in-residence at Connectas and editor and coordinator of the project .

As journalist-in-residence, Enríquez will be in Bogotá, Colombia, for a total of seven months and will lead a team of journalists that includes Julián Navarrete, Ivette Munguía, Lucydalia Baca, and Judith Flores.

“We identify ourselves in that we like journalism and we want to tell what is happening there, and then [we chose them] for their quality, they are very good," Enriquez said. "We come together based on that interest, which is the interest of journalism and telling the stories of Latin America."

In addition to satisfying Nicaraguans’ needs for information, the project wants to try to explain to Latin America what is happening in Nicaragua. “This project, I think, contributes to the fact that, in the middle of the dark, we are telling people what is happening and it is very solid team work,” Enríquez said.

They are focused on monitoring public resources, but are trying to make "reports from all possible angles." They started with a report on how the government had gotten into public schools through books that "seem to be drawn from propaganda more than from a curriculum," according to the report.

The case of those close to the President who control gasoline in the country, the suffocation of newspapers, alleged sexual violence against people detained during the protests in 2018 or the "fair of figures" detailing the alleged concealment or manipulation in state figures, are some of the investigations published under this project.

The creation process is “like that of any newsroom,” where proposals are discussed and analyzed, Enríquez said.

That is why for Enríquez, the accompaniment given to journalists from the editors is much more valuable.

“What I like about the Connectas team is that there is first of all a follow-up to the issue. It is not just waiting for the result of a product, but the editor follows along – which is the philosophy of the organization – with the writers during the investigative process, opens doors when they have to be opened and after there is the first product there is a lot of discussion about the texts,” Enríquez said. “Here I want to highlight the content area, the area of Carlos [Huertas]. Because it is very important to understand that the hope is that they read us everywhere and everywhere it is understood in the same way.” 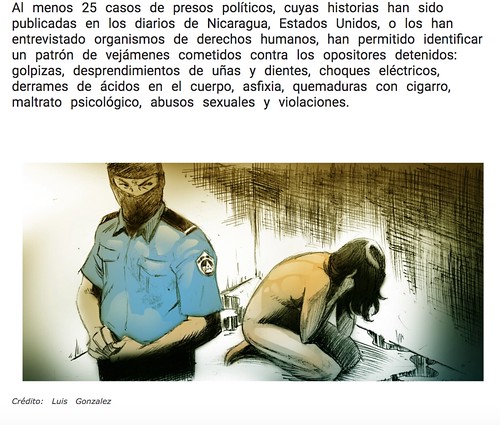 To achieve this understanding of the texts, they have had to change their "local" way of writing in which "many things are taken for granted." As such, their stories have been republished by media outlets in Mexico, Colombia, El Salvador and Spain, Enríquez explained.

Both Huertas and Enríquez see as positive the project’s progress to this point, as well as their main objective of keeping the situation in Nicaragua on the international agenda.

“The purpose of Nicaragua.Connectas is to keep attention on those complex realities that are still unresolved and that when forgotten can be a propitious space for more complexities to be created," said Huertas, who added that they are looking to continue with the project after December. “And the expectation is that to the extent that it is revealing what is happening there in a much more regional language, this may be a formula to not only keep these issues on the agenda, but also so that changes can be made from the discussions and revelations that are being made through the investigations and in-depth articles that are being published.”

“It is a scenario that far from normalizing, it is becoming more closed [for the media], and the impact, it is true that it affects journalists, but also citizens, because of the quality of information that they are receiving," Enríquez said. "I believe that this is the main contribution that is being made with this project: we are trying in the midst of all the adversities of bringing quality information and thanks to the allies we are making this information visible in the region.”

“It is a great contribution that all these stories are being published and that the Latin American public knows what is happening in Nicaragua because the situation is not easy and unfortunately it will get worse,” Enríquez concluded. “Realistically it will get worse.”