Representation and diversity are characteristics that should be inherent to media, according to opening panelists at Knight Center diversity conference

Two journalists who shared life and professional experiences in their search for diversity in the news opened the First Latin American Conference on Diversity in Journalism. 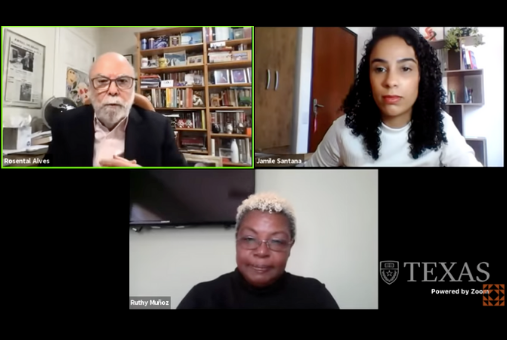 Opening session of the Conference of First Diversity in Journalism organized by the Knight Center, with Rosental Alves, Yamile Santana and Ruthy Muñoz.

The first invited speaker, Ruthy Muñoz, wanted to be a journalist since she was 9 years old. Her parents are Dominican, but she was born and raised in the United States. They did not speak English at home and they watched the news on Spanish-language channels, such as Telemundo and Univisión, she told attendees. As a child, she noticed that the people who read the news and the actors and actresses of the soap operas that she watched with her parents did not look like her.

However, that only gave her further impetus to pursue a career in journalism throughout her life. During her years in the U.S. Army, she worked in the press at the bases where she was stationed.

However, imposter syndrome again stopped her from applying for journalism jobs when she lived in New York because she felt she did not have the same qualifications as white journalists, she said.

The lack of diversity and representation was something that she always felt was very present. “That takes away a person's voice, that can influence the person, it can influence the children who are watching the news and don’t see anyone who looks like him or her. It can influence your desires and careers, it can even kill a dream. And my story is not my only story, it is the story of many,” the journalist said.

Throughout her career, Muñoz has collaborated with various print, radio and TV media outlets. She is currently a freelance journalist and writes for palabra, a digital news outlet from the National Association of Hispanic Journalists (NAHJ) that focuses on stories from Latinx journalists.

Meanwhile in Brazil, journalist Jamille Santana, who specializes in data, recounted the experience of a new journalism training program whose mission is to promote diversity in newsrooms and in the news.

At the Brazilian non-profit organization Énois, where Santana is manager of journalism and distribution, the Diversity Program in Newsrooms was implemented in October 2020 with funding from the Google News Initiative. "It is a pioneering diversity project in the country," she said.

According to Santana, Énois was born in 2009 as a journalism school, but over time it became a laboratory that manages different projects with media associates in all regions of the country.

It is a training and exchange program between young people, reporters and newsrooms that seeks to increase diversity and local representation in news teams and that promotes journalistic production with a focus on gender, race, intersectionality and other themes. In addition, Santana explained, diversity is sought in the management of journalistic media in terms of institutional conduct, and in their way of addressing the various profiles of the professionals on their teams.

Through the program “we have received requests from 40 newsrooms and 272 reporters in the country. We have selected 10 newsrooms and 10 reporters. We have seven Black women reporters, one Indigenous woman, one trans woman, and one Black man. Each reporter is accompanied by a mentor in the media outlet, who also goes through diversity training with us,” Santana said.

The program involves training, use of tools, practices and proposes reflections to promote diversity in journalism in different environments, according to Santana. From this arose the need to create indicators to monitor the development of the situations posed by the program in the different areas. The metrics they created allow them to identify and measure the impact of culture change within the newsroom, she added.

Following the opening sessions from Muñoz and Santos, the conference featured panels with journalists from across the region who spoke about gender, sexual orientation, racial and ethnic issues and disability.

Video of the opening session, as well as the four panels, is available here.