As of Dec. 1, 2021, six journalists were deprived of their liberty for reasons related to their work in Latin American countries, according to the 2021 census of imprisoned journalists carried out by the Committee to Protect Journalists (CPJ, for its acronym in English).

The three Cuban journalists are currently serving preventive detention. The two women reporters were detained during their coverage of this year's protests on the island.

Ares, a reporter for the community newspaper Amanecer Habanero, was arrested on April 30 and taken to a police station in Havana. The Cuban Institute for Freedom of Expression and the Press (ICLEP) denounced at the time that Ares had been subjected to intense interrogation during the night of her arrest and had been prevented from sleeping. 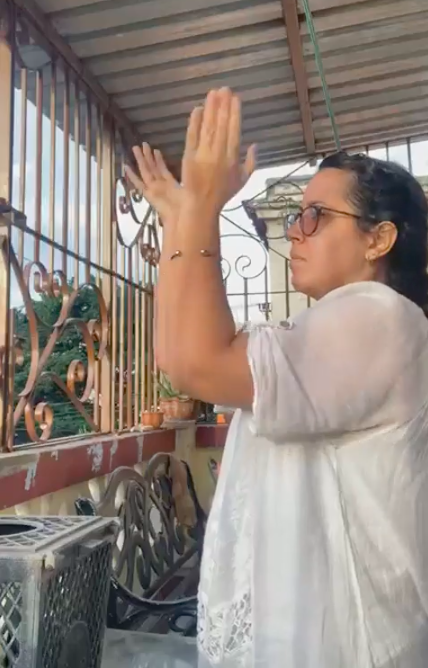 Camila Acosta, a correspondent for the Spanish newspaper ABC and a contributor to CubaNet, is under house arrest after being detained while covering demonstrations in Havana. (Photo: taken from Facebook)

Ares was admitted on May 26 to the Guatao women's prison, in the La Lisa municipality of Havana. Three days later, she was placed under preventive house arrest, where she remains under investigation to this day on charges of "public disorder and resistance."

Acosta, a correspondent for the Spanish newspaper ABC and a contributor to CubaNet, has also been under house arrest since she was detained while covering the July 11 demonstrations. She was charged at the time with "public disorder," although recently, on Nov. 2021, her charge was reclassified to "instigation to commit a crime."

"I'm still under precautionary measure, awaiting trial. They have not even given me the prosecutor's request," Acosta told LatAm Journalism Review (LJR) after the publication of the CPJ census.

The journalist believes that the situation of freedom of the press in Latin America will only improve when there is a common front for defense in the region.

"I do not see signs of improvement, not at all. Unless governments and human rights organizations adopt a common position," she added.

Valle Roca, from the digital news outlet Delibera.org, was arrested on June 2021 at a Havana Police headquarters, where he had allegedly been summoned to close a previous case of contempt. The day before, the communicator had published on his YouTube channel a video advocating for democracy in Cuba.

In October, Article 19 denounced that Valle Roca was not receiving adequate medical attention to treat his kidney problems in prison, in addition to the fact that his home had been raided.

In Nicaragua, Mendoza and Holmann have spent several months in detention at the El Chipote prison in Managua, awaiting trial. Mendoza, who is a sports journalist, was arrested on June 21 accused of carrying out acts that "undermine independence, sovereignty, and self-determination" and for "inciting foreign interference in internal affairs," as reported by the National Police, without giving further details.

In recent years, Mendoza has criticized the government of President Daniel Ortega on social media and has expressed opinions about the human rights situation in the country. CPJ reported in June that the journalist's home had been raided and that authorities had seized his computer and other work equipment.

Holmann was arrested on Aug. 14, 2021, after being summoned to El Chipote. The journalist, who is general manager of La Prensa, the only surviving print newspaper in Nicaragua, was charged with customs fraud and laundering of money, goods, and assets.

The day before, on Aug. 13, La Prensa's offices were raided, after the Board of Directors announced that the print edition of the newspaper would stop circulating because customs authorities had repeatedly withheld imports of supplies.

The two Nicaraguan journalists have been denied access to their lawyers and family members, CPJ said in its report.

"The criminal proceedings against Mendoza and Holmann are one of the most extreme examples of the current strategy of the Nicaraguan authorities to use the judicial system to intimidate and punish critical voices in the media," the organization said.

The only Brazilian case of journalists in prison is that of the sports and political blogger Paulo Cezar de Andrade Prado, who is currently serving a five-month prison sentence for a 2016 defamation case brought by Paulo Sérgio Menezes Garcia, a board member of the Corínthians Sports Club football team. 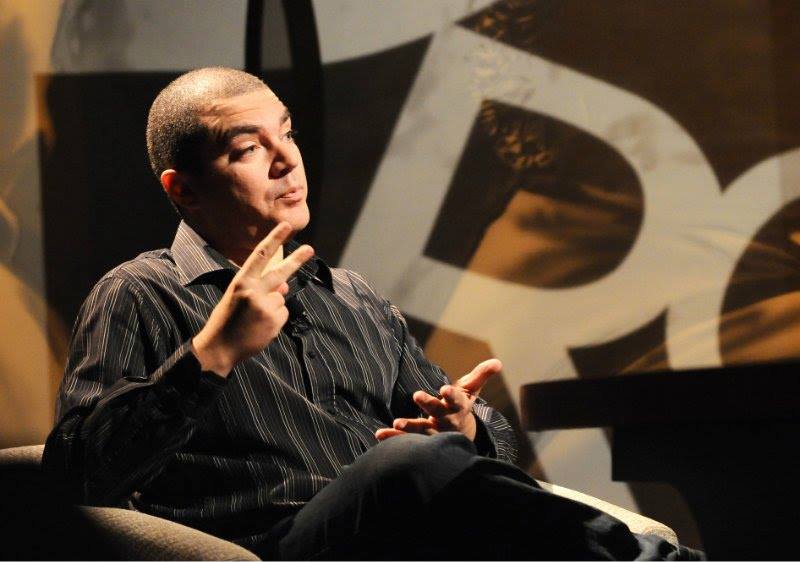 On November 2021, the blogger Paulo Cezar de Andrade Prado was transferred to his home, where he will serve the rest of his sentence under house arrest for a defamation case. (Photo: taken from Facebook)

Prado was arrested on Sept. 28, 2021 at his home by agents of the São Paulo State Civil Police and transferred to the Tremembé prison complex, where he spent the first two weeks in isolation, before being transferred to a cell with about 80 interns. In November he was transferred to his house, where he will serve the remainder of his sentence under house arrest.

"In many places, the mere threat of jail time is enough to send an intimidating message," CPJ said. "This year, authorities in countries throughout the Americas, including Brazil, Peru, and Colombia, filed defamation suits against investigative journalists, many of whom were investigating allegations of corruption or poor performance by public officials."

The CPJ census found that the number of journalists jailed for their work around the world reached record highs in 2021. A total of 293 communicators were deprived of their liberty for practicing journalism as of Dec. 1. This represents an increase over the 280 cases registered in 2020.

Despite the relatively low numbers of journalists in prison in Latin America, in 2021 CPJ noted a worrying deterioration in the situation of press freedom in the region when considering other indicators.

"This year alone, in addition to reporters being killed in Mexico, Colombia and Haiti, other journalists in Mexico, Brazil and Colombia have barely survived shooting attacks," the organization said. "While deadly violence remains the main form of censorship in countries like Mexico and Colombia, tactics to silence journalists in Latin America and the Caribbean are evolving, taking the form of legislation and judicial rulings throughout the region." 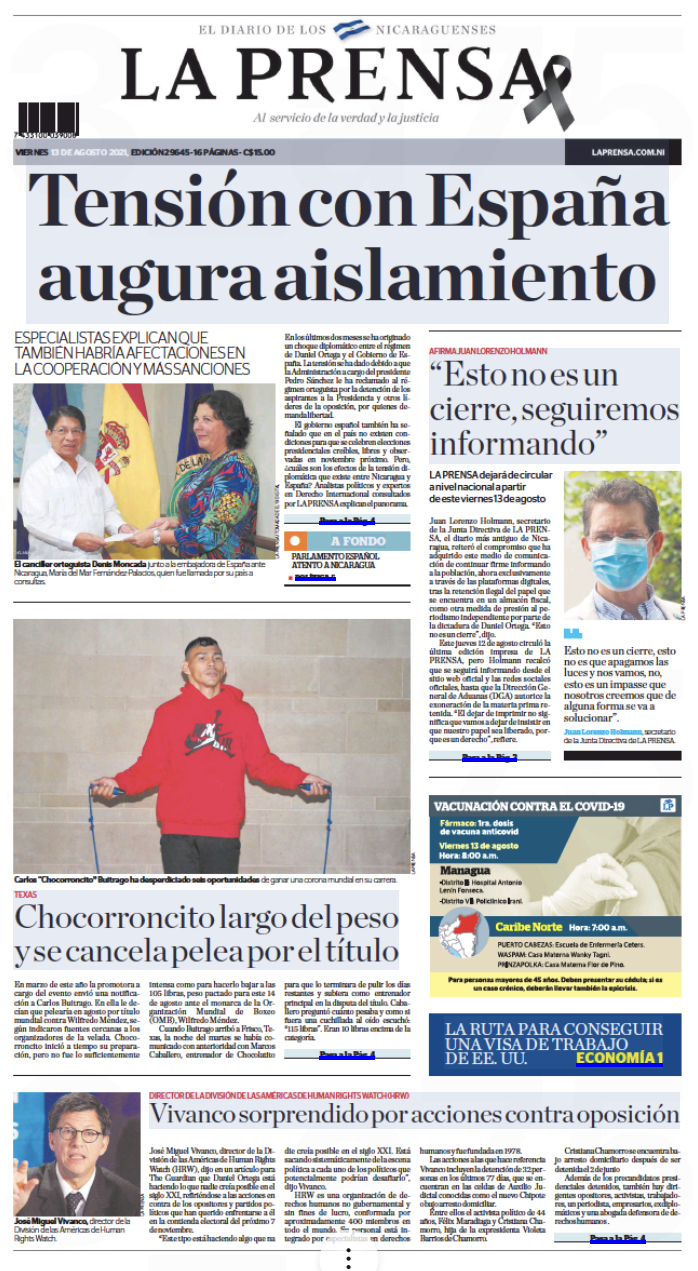 The general manager of La Prensa, from Nicaragua, was accused of customs fraud and laundering of money, goods and assets. (Photo: Screenshot)

Repression in Nicaragua intensified in 2021, according to CPJ. In the midst of a controversial electoral process that put Daniel Ortega in power for a fourth consecutive period, Nicaraguan authorities have been harassing and detaining journalists and opponents, banning civil society organizations, and making expeditious use of new laws that penalize critical voices.

The Ortega regime proposed in 2020 the Foreign Agents Regulation Law, which would force any entity or person that receives foreign financing to register with the Ministry of the Interior as a “foreign agent,” including journalists who work for media from other countries.

Mexico, for its part, remains the most dangerous country to practice journalism in the West. In 2021, CPJ recorded three Mexican journalists who were murdered: Gustavo Sánchez Cabrera, Jacinto Romero Flores, and Ricardo Domínguez López.

Sánchez Cabrera, director of the news site Noticias Minuto a Minuto and a journalist for Panorama Pacífico TV, was assassinated on June 17 in the state of Oaxaca. Romero Flores, host of the Ori Stereo FM station and the Radio Ixtac Online program, lost his life after being attacked when he was driving his car in the state of Veracruz. Domínguez López, director of the InfoGuaymas portal, was gunned down in the parking lot of a supermarket in Sonora.

CPJ also indicated that it continues to investigate six other cases of journalists murdered in Mexico to determine whether their work as communicators was the main motive for their deaths.

The report highlighted that, in the face of the crisis caused by the COVID-19 pandemic, several leaders in the region have imposed emergency measures that have somehow hampered the ability of the press to investigate freely, as expressed by CPJ and the TrustLaw program of the Thomson Reuters Foundation in a June report this year.

Like Nicaragua, authorities in Guatemala and El Salvador have introduced laws that would give the governments of those countries more control over the activities of foreign-funded organizations.

"With so many leaders throughout the region taking an increasingly hostile stance toward journalists who hold them accountable, other Latin American countries could also follow down this troubling path," CPJ warned in the report.