In late 2021, Carbon Brief climate science journalist Ayesha Tandon began researching the lack of diversity in climate science research. Tandon searched the 100 most-cited scientific papers over a five-year period and found that nine out of ten authors came from countries in the northern hemisphere. Only 10% came from the South and just 1% from Africa.

So, as a journalist, she decided to start amplifying the voices of experts from the southern hemisphere and to use more citations from researchers from Latin America and the Caribbean, Africa, the Pacific and Asia in her work. However, she found it very difficult to get in touch with experts in countries in these regions.

Tandon, little by little, began to assemble a list of names that later, with the support of Carbon Brief and the Oxford Climate Journalism Network (a program of the Reuters Institute for the Study of Journalism at Oxford University), became the Global South Climate Database.

"Climate has disproportionately affected countries in the South, but the studies and stories coming out show that it's white men in the North who are getting the calls from the most influential media outlets for their expertise, and that's where this initiative comes in," said Carbon Brief journalist Aruna Chandrasekhar at the official launch of the database on Oct. 31. "This database is a public, accessible, completely free and searchable database of experts in the field of climate science, energy and climate policy from the global south. It has 412 experts from 80 countries," Chandrasekhar said. 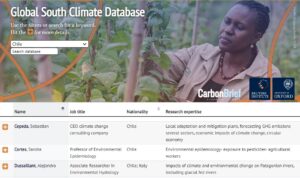 The Global South Climate Database has a search bar available to filter by nationality or any keyword. Photo: Screenshot.

Another important point about the database is that it not only allows you to get English-speaking experts. There are more than 50 languages available, from Spanish, Portuguese, Hindi, French to Malayalam. This makes it easier for journalists to get expert sources in the original language of their audiences, which is useful for audiovisual content.

For a journalist, getting experts from the same country or language also allows him or her to break down cultural barriers as the interviewee will have more regional context and will be able to understand the history and trend of climate conversations in their region.

To access the database, visit the Carbon Brief website and go to the science section. The database lists the expert's name, nationality, place of work, area of expertise, preferred pronouns, language and contact details (including social networks such as Twitter).

The tool has a search bar available to filter by nationality or any keyword.

According to data provided by the creators, about 60% of the experts in the database use the pronouns he/him, while just over 33% use she/her. Meanwhile, 0.5% of the experts identify themselves as they/them.

The database also includes a section for experts to specify their media experience. This allows journalists to see who has public speaking experience.

The creators of the tool want to continue to feed the base, so they are inviting climate scientists from the southern hemisphere to fill out an online form. According to Carbon Brief and the Oxford Climate Journalism Network, being part of this database can mean media opportunities for experts such as providing quotes for articles, writing news stories, participating in webinars, or other activities.

Each of the requests to be part of the database are verified by the team creating the tool. They check to see if the person has the nationality of at least one country in the southern hemisphere and that the person has relevant experience in climate science, energy or climate policy.

"We believe that scientists and experts should be the ones who choose whether or not to be in the database, but there is a filter to ensure the experience and quality of work of the people who are in it," said Diego Arguedas Ortiz, Costa Rican journalist and director of the Oxford Climate Journalism Network.

The database has 412 experts from 80 countries, so far. The creators invite climate scientists from the southern hemisphere to join. Photo: Screenshot.

Recently, journalist Álvaro Caballero of the Spanish Radio and Television [Radio Televisión Española or RTVE] said through his Twitter account that he had been able to contact experts in Pakistan for a feature story on the Climate Summit in Egypt (COP27) thanks to the Global South Climate Database. He recommended its use to fellow journalists.

There are others who, although no longer practicing journalists, said they would have liked to have had this tool when they were covering climate change years ago. "The voices have been far too restricted and it’s fantastic now to have this resource," Leo Hickman, director of Carbon Brief, at the launch of the database, said.

“I spent on average three hours per story seeking global south comments before reverting to global north experts and if you work in daily you know that time is what you do not have. But I always make the time because it is really important that the context of the climate story that’s set in the global south actually is set within the voice of the global south," said Associated Press climate contributions editor Lagipoiva Jackson at the launch of the foundation. "This tool will help us balance the voices of climate experts, move from international experts to southern hemisphere experts, which is much needed."