The “ornitorrinco de la prosa” (platypus of prose), the crónica, is one of the most present forms of narrative journalism in the region. The zoological definition is from journalist and Mexican writer Juan Villoro, for whom the crónica is "an animal whose biological equilibrium depends on not being like the seven distinct animals that could be" and from which it takes its elements: the novel, the report, the short story, the interview, the theater, the essay and the autobiography.

“It is a genre in which writing has aesthetic ambition and investigation has depth,” Alberto Salcedo Ramos, specialist in the format and instructor of the Gabriel García Márquez Foundation for New Iberoamerican Journalism (FNPI, for its initials in Spanish), told the Knight Center.

According to Salcedo Ramos, the crónica does not replace the news, whose purpose is to report a fact as soon as it happens.

“Shortly after, when the mere record does not fulfill any function because the public already knows what happened, what follows is to discover in it some stories that help us explain it,” Salcedo Ramos said. “That's why I say that the crónica is the human face of the news. When you read a story carefully, you discover in it possible stories to make crónicas, and if you read a crónica that is well done, you will find news in it, information that you did not know.”

In the first decade of the 2000s, the journalistic crónica became prominent in several media in Latin America, such as the magazines Etiqueta Negra (Peru, 2002), Gatopardo (Mexico, 2006) and piauí (Brazil, 2006). At the end of the year 2010, journalism has been turned upside down by the omnipresence of social networks, and new purely digital media have turned their attention to the genre and brought it closer to a public more familiar with the screen than with paper.

From personal blog to site of many voices

This is the case of Escritura Crónica, founded by Argentine journalist Agustina Grasso in 2012. Born as a personal blog of the author, it transformed into a website and began to receive contributions from other journalists two years ago. 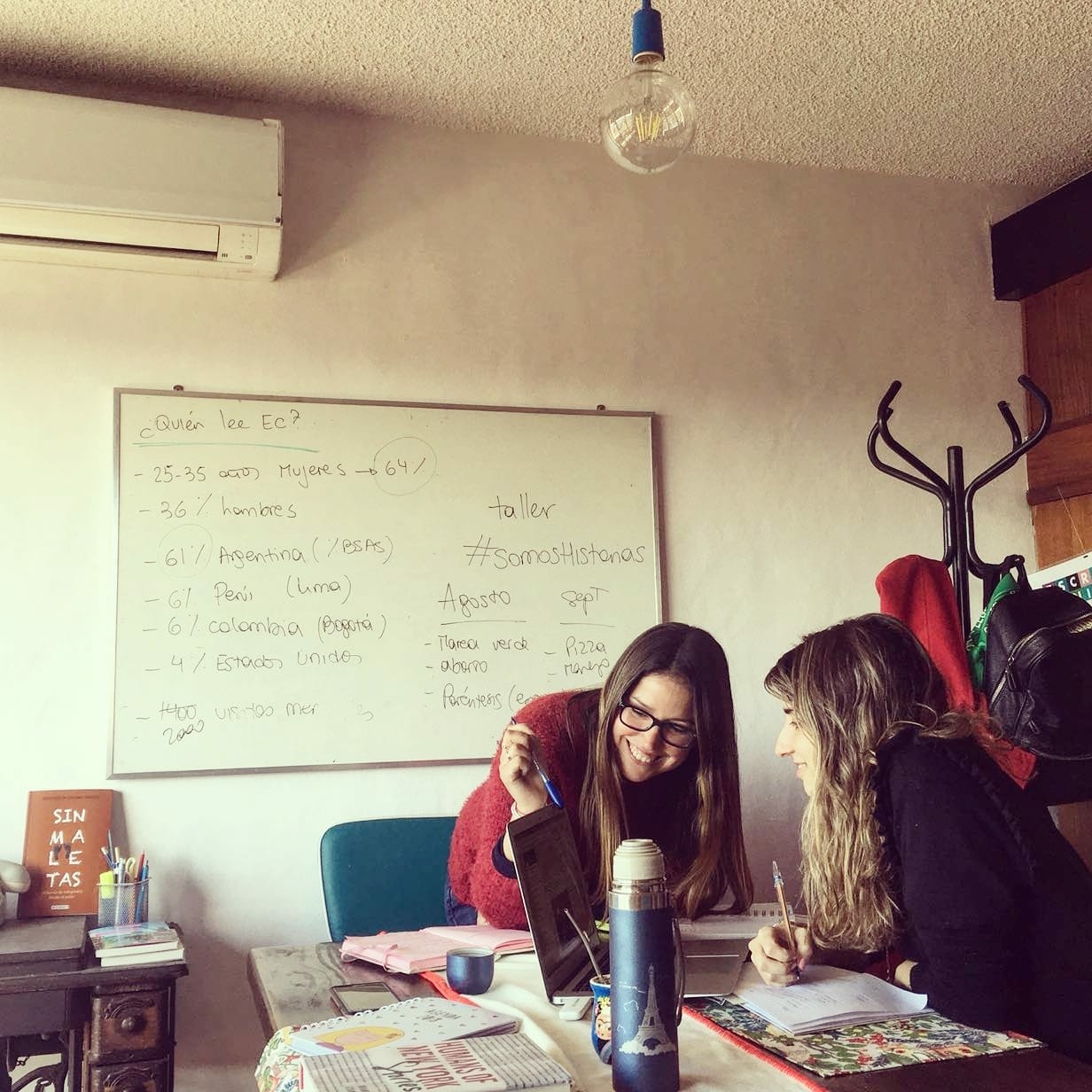 Members of the Escritura Crónica team, Cynthia Finvarb and Agustina Grasso, plan for the site. (Courtesy)

“A lot of crónicas in the style of the site began to arrive, like more quotidian crónicas, also about human rights, complaints,” Grasso told the Knight Center. “I finished rethinking the site a bit and relaunching it as the Netflix of the crónica, because it was just that, diverse stories under the hashtag #SomosHistorias [#WeAreStories]. I really feel that, that the world is full of different stories and that all together we are like a kind of sea of stories.”

In Escritura Crónica’s sea of stories there are texts about female Argentine narrators who covered the Soccer World Cup in Russia; women who fought in the Falklands War; tea vendors on the streets of Sudan, in Africa; and a profile of an Argentine lookalike singer Luis Miguel.

The texts come from various parts of the world, Grasso said, and are developed by the team that today consists of four journalists and a designer. The size of the texts and the frequency of publication are intended for the world of social media.

“We have an average of 5,000 characters per crónica, which are much shorter than the more traditional crónicas tend to be,” the journalist said. “We know that people today are not reading very long texts, and that is why we wanted them to be meaningful and short texts, so that people can really read them. We are publishing an average of two crónicas per month. We also aim for there to not be so much content saturation because really today there is an overload of information and we do not want to contribute to that.”

In this environment of “information overload,” Escritura Crónica seeks to take this journalistic genre to social media. The idea is to make use of the possibilities of each one, not only for the purpose of increasing the number of clicks, but also for unfolding the potential of the crónica. For example, a series of stories are posted on the Instagram profile for each crónica released. The most recent, about the relationship of women with the steering wheel, had a story that asked followers what they felt when driving and reproduced some of the responses they received. 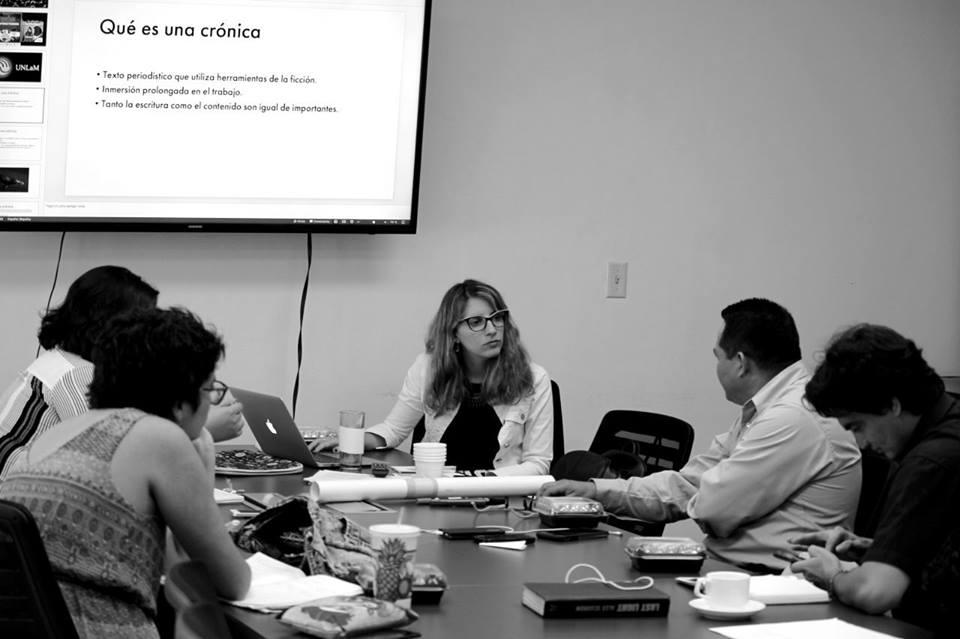 “A text presented like this, in a flat way, is not the same as one with beautiful illustrations, animations, or gifs. Also, that is the idea, but always without losing rigor in both the writing and content,” the journalist said.

In addition to the efforts on social networks, the texts published in Escritura Crónica must have “scenes, dialogues, a main character, a common thread, a good introduction, a conflict and an outcome that also leaves you thinking,” plus a theme “that catches the attention and opens the mind” of the person reading. “Each story must touch a universal theme. So I can tell the story of a refugee from the Congo in turn I know that the underlying universal theme is resilience, for example,” Grasso explained.

Daniel Wizenberg, one of the founders of Late magazine, has definitions similar to those of Agustina Grasso about what a good crónica needs. Citing Peruvian Julio Villanueva Chang, founder and editor of the magazine Etiqueta Negra, the Argentine journalist says that "the text has to move."

“To be moving, the text needs to be relatable to as many people as possible,” Wizenberg told the Knight Center. “What you have to point to is problems that go far beyond a niche or a small sector, and that they do not tell the story by the story itself, but by what that story teaches and shows to anyone, from a grandmother to her grandson, from a plumber to a lawyer.”

Late magazine, founded in March 2017 by Wizenberg and five journalists from Chile, Cuba, Mexico, Colombia and Ecuador, was formed to narrate the world with a Latin American voice. In addition to reports about the region, such as texts on the workers who cultivate mate in Argentina or the alliance between a collective for peace between transgender people and the Revolutionary Armed Forces of Colombia (FARC), it presents stories of places as far apart as the Western Sahara and Iran.

Wizenberg believes that the crónica is the "emblematic structure" of what is conventionally called narrative or literary journalism.

“We are inspired by great masters, who were great writers as well, and who used the crónica not only to write fiction, but also non-fiction. And at the same time, very good teachers who use the crónica to do good journalism, that is, to make an entertaining story that moves but also has sources, fact-checking, conceptual rigor,” he said. 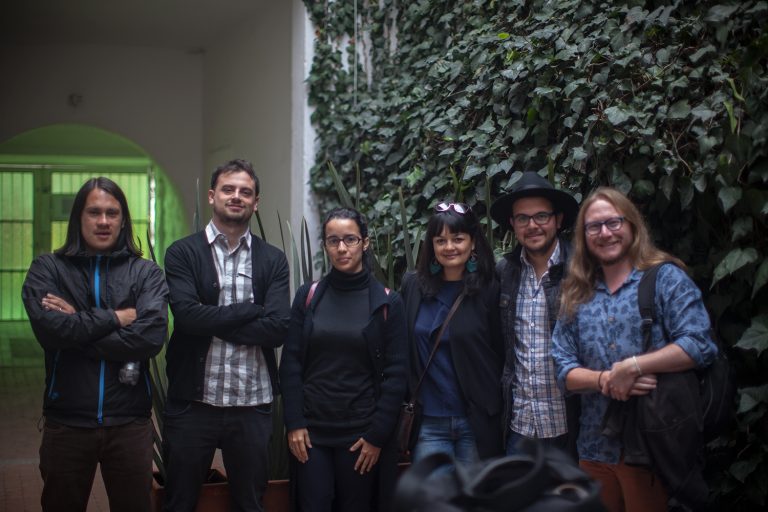 The journalist believes that the format has "become fashionable again" also because of the general context of relative precariousness and devaluation of traditional journalism and the possibilities offered by the digital environment, also leading to a proliferation of independent journalistic initiatives, such as Late itself.

“A good crónica needs not to be bothered by the amount of characters. In that sense, digital offers the chance to develop,” Wizenberg said. “If we talk about the crónica as a report, I think that has to do with giving an entertaining version of a journalistic piece that allows a reading that flows through different formats in the same narration.”

Unlike the founder of Escritura Cronica, the founder of Late magazine thinks the idea that people do not read in the digital environment is a “prejudice.” And social networks play their part in this.

“As with paper, the fact that they read or don’t read is determined by the quality of the work and the effectiveness of its dissemination,” Wizenberg said. “The social networks, what they do is to be a tool for diffusion that in any case will not work if the text does not have a good title and a good start. I think that if these three conditions are met, people are willing to read and take their time. And I think that if we also add to the crónica, the report, as I said, other formats, like infographics, video, podcast and many multimedia tools that brighten the run of the text, well, we will multiply even further the chances that people stay until the end.”

Also in Argentina, Angular was born in June 2017. The narrative journalism platform seeks to work with "dignity and identity of people," in the words of Migue Roth, one of its three founders.

“From the beginning we knew that we would not go after the news of the moment; that we care about longform journalism, the long-distance race if you like, of resistance, of cross-country, rather than that of speed,” Roth told the Knight Center. The idea was “to look for stories that usually remain relegated from the agenda of mass media, themes and voices ignored or directly silenced.” Among them are the reconstruction of Nepal after the earthquake of 2015 or the street population in Santiago, capital of Chile.

Roth sees an "amphibian character" in narrative journalism that makes it attractive and efficient to tell the stories that interest those at Angular.

“I understand the crónica as a way of saying, of pronouncing, of showing; as an open way to recount; I do not know if it is the best, I do know that this plasticity allows you to play with the language, incorporate and try alternatives of telling. Sometimes it works so well that it makes the story flow, and it strengthens the words so that the reader perceives all the nuances, the tastes, the smells and sensations that story has.” 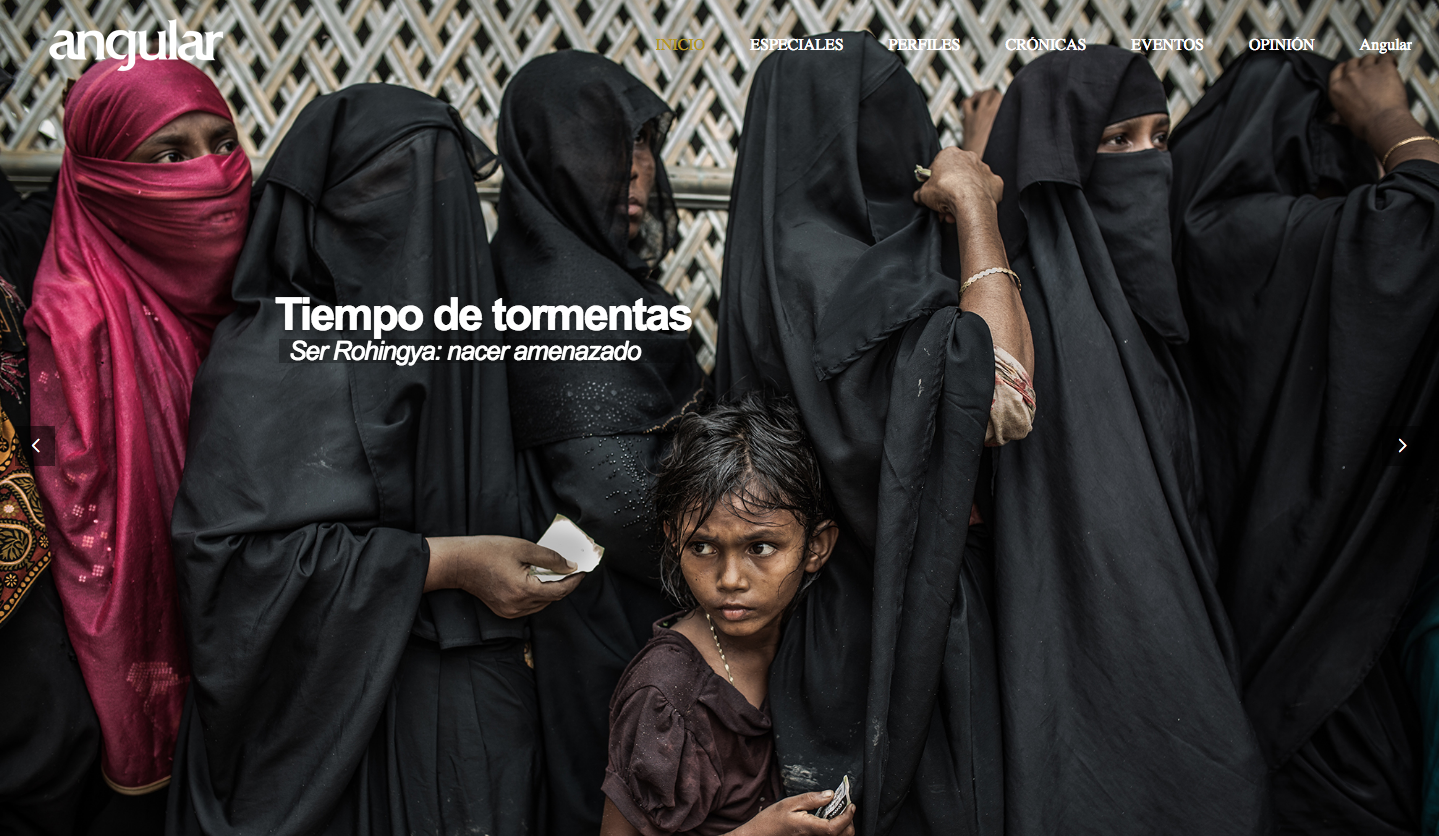 For the founder and editor of Angular, the crónica contrasts with the digital media environment we are in today.

“Social networks have the ability to make content massive with the same ease that leads to its expiration. And it is regrettable that most media respond to that paradigm, almost by inertia,” Roth said. “The journalistic crónica is, in some way, an insistence before speed and an antidote against infoxication [information overload].”

The challenge of financing

In addition to dedication to narrative journalism, these three initiatives also share a business model that includes consultancies for organizations, as well as online courses and face-to-face training in journalism. They also dispense with advertising as a source of income.

“We knew that we would enter rustic, arid terrain – that we would be dry, in other words,” Migue Roth said. The first bet was collective financing to structure Angular, and then “to apply to grants/scholarships/subsidies and opportunities that arise for alternative media – which are very few. We aspire to obtain the support of some entity that allows us to invest in the platform and pay for collaborations.”

Angular and Escritura Crónica are defined as self-managed spaces and seek solvency to pay their collaborators. Late magazine has a budget and, according to Daniel Wizenberg, publishes more or less stories according to what it can pay its collaborators.

“That's why we try to publish a good story once a week instead of filling in content just to fill it,” he said.

For Wizenberg, money is also a challenge for the production of journalistic crónicas in media with more robust sources of income.

“The majority, especially in Latin America, but in Spain also, are badly paid for a job that takes a lot of time, sometimes months,” he said. “A good crónica cannot be built charging what is charged in the Latin American market, and this is a great limitation, not only for the genre of the crónica but for any journalistic work.”

One possible solution involves "multiplication," according to Late's founder, and is also related to all three initiative’s efforts in training journalists and fostering narrative journalism.