Tom Rosenstiel: “If we think that our opinion has more moral integrity than genuine inquiry, then I fear we will be lost”

When it comes to journalism, there has been a long-time discussion and dilemma around the word “objectivity.” It has been a part of the professional journalism and academic discussions, but it seems there is still a lot confusion surrounding it and what to do with it.

That was one of the reasons why Tom Rosenstiel, executive director of the American Press Institute, gave his keynote presentation “Objectivity is Not Neutrality: What is the purpose of journalistic inquiry?” during the 21st International Symposium on Online Journalism (ISOJ) July 24. The conversation was chaired by Kathleen McElroy, director of the School of Journalism at the University of Texas at Austin.

In a conversation that had moments of journalism’s history, philosophy and personal conclusions, Rosenstiel began by quoting his friend Bill Kovach saying, “every generation invents its own journalism.”

“This is one of those moments. We have entered a period of reflection, re-examination and reckoning over race, racism, default culture in newsroom, objectivity, the purpose of journalism and more,” said Rosenstiel. Right now, people distrust the media, even “media people” distrust it, and that is why asking questions about the role that journalism plays on a democratic society, and the purpose of journalistic inquiry come to mind, he explained. 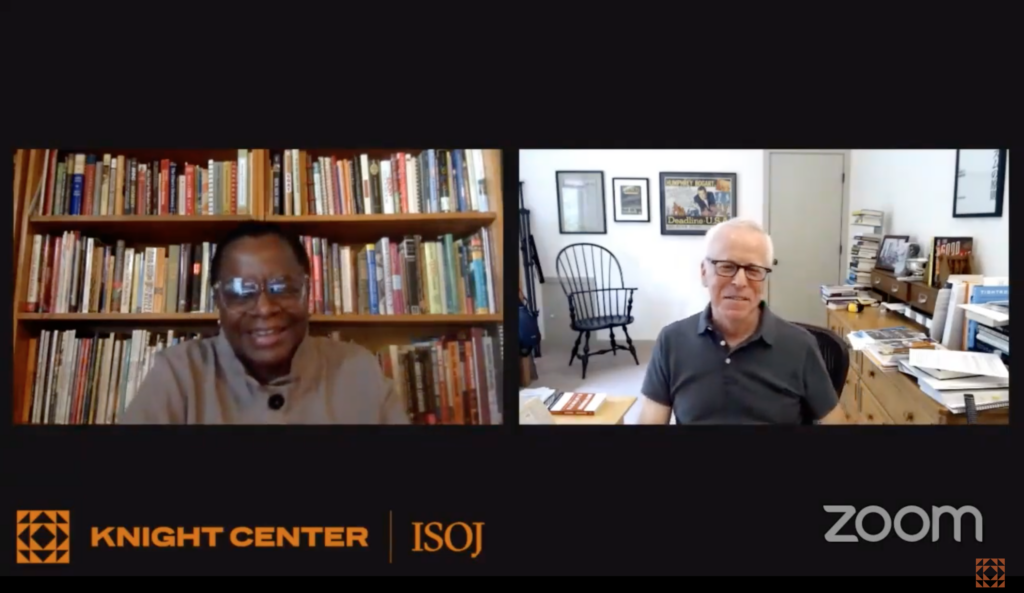 To answer these questions, Rosenstiel explained the context in which professional journalism was born. The purpose, he said, was that information held by the few could be share by many. At the time, the concept of “public opinion” did not even exist. “Journalism exists in history and in our American Constitution so that people can self govern,” he said.

It was precisely in this context when the word objectivity began to be a part of journalism. The world was in crises, WWI had just ended and people began to ask if democracy was important. People were worried journalism was not fulfilling its role.

He said there has to be space to acknowledge that a journalist has a starting point of view, while not denying the possibility of “objective methods” to do the reporting.

“I dislike the word objectivity,” he said. “Journalists did not invent it. We are not the first to be confused by it, but we are massively confused by it and it is hurting us.”

However, he made it clear he did not like the binary concept of “objectivity” and “subjectivity,” because if journalists agreed that objectivity as a method is not possible, the only option left is subjectivity, and that could not be how journalism is done.

Rosenstiel and McElroy agreed there is still a lot to discuss in regard to finding another term other than “objectivity” that could define a journalistic method used in the search for the truth.

Both also spoke about default culture and its impact in  how stories are covered. McElroy asked if by denying default culture, newsrooms were creating spaces for other structures, such as patriarchy, to be maintained. Rosenstiel agreed and said it was an intellectual failure of journalism.

“Rather than avoid tricky conversations – thinking that all people think the same – [newsrooms should] create an environment where people can disagree, and bring personal experiences,” Rosenstiel said.

Rosensteil said that journalists have never stood from nowhere, but rather they “stand by an number of things even before we bring our own personal experiences.” For example, journalists stand for factualism, government transparency, equality in law, racial justice, looking for the voiceless, among others principals. But their default culture is also defined by their gender, ethnicity, and individual consciousness.

Rosenstiel said that because of each generation creates its own journalism, he believes that now there is a much “clearer sense of the evils of default culture and unconscious bias in journalism,” and that makes journalism better.

“I stand for the professional discipline we believe in: this skeptical way of knowing the world, this passion to learn and inform, which distinguishes us from propagandists and political advocates whose primary aim is to persuade, this is what will save us”, he stressed. “But if we abandon that common purpose or replace a misguided understanding of objectivity by taking refuge in subjectivity and thinking our opinion has more moral integrity than genuine inquiry, then I fear we will be lost”.

ISOJ 2020 took place online from July 20-24. Take a look at our special coverage in our website.