A journalist from one of Peru’s largest radio networks receives daily threats against his life and his family after an interview asking about a controversial ultra-right group that has made a habit of harassing members of the critical press. Almost simultaneously, a journalist from a news site specializing in health fears for her physical integrity after publishing an article warning about the eight anti-vaccine groups that spread lies in the country.

Both Peruvian journalists, like many others, are being targeted by ultra-conservatives who encourage harassment of critics and even threaten them. It’s happening in a country that has been socially fractured by polarization left by the last general elections.

The first case concerns the collective La Resistencia and its supporters. A group created in 2018 by people linked to the Fuerza Popular party, led by Keiko Fujimori, the two-time presidential candidate and daughter of former President Alberto Fujimori, according to Caretas magazine. The members of the collective, the magazine points out, call themselves “Christians, pro-life, pro-family and defenders of the homeland.” 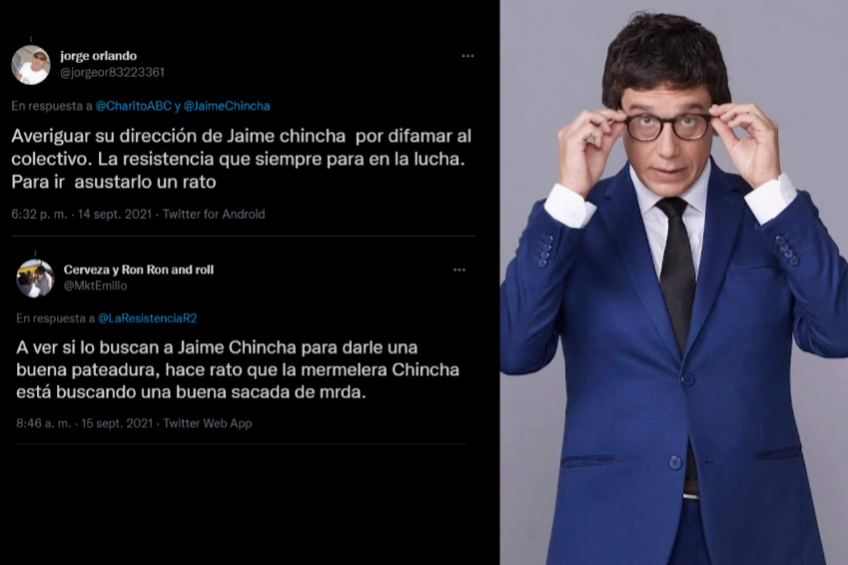 Recently, on Sept. 13, journalist Jaime Chincha, who directs the program “Nada está dicho” (Nothing is said) on RPP Noticias asked his interviewee, General Óscar Arriola, head of the Antiterrorist Directorate (Dircote) of the Peruvian National Police, if La Resistencia should be investigated as an armed group. After his question, Chincha showed the general some statements from the leader of that collective in which he said that some of its members carried weapons.

"For some reason, this group felt attacked by the question of a journalist, in this case from Jaime Chincha, and they began to say it in networks," news director of RPP, Daniel Titinger, told LatAm Journalism Review (LJR).

“Find out the address of Jaime Chincha for defaming the collective. La Resistencia is always in the fight. Let’s scare him a bit,” says one of the Twitter messages cited in an alert issued by the Press and Society Institute (IPYS) of Peru to denounce threats and digital harassment against journalists. In another message, someone else makes a call to physically attack the journalist.

Titinger considered that La Resistencia is a collective that is more of a hate group, that does not obey any political party or any visible leader.

"It seems to me that it is a group that only adds hatred, from an extreme position, not even political, but violent and savage ... It hates all those who do not think like them," he said.

Likewise, Titinger welcomed the solidarity towards Chincha expressed by the Minister of the Interior, Juan Carrasco, and the initiative to open an investigation against that group for the commission of other violent acts. Chincha has the full support of RPP, especially in security matters, Titinger said.

Adriana León, head of press freedom at IPYS Peru, told LJR that the Chincha case is "serious," since the threats call on the followers of the collective to look for him at his home and kick him. "And these things are quite serious, but it is even more serious in the situation as polarized as the one we are experiencing now, which exacerbates spirits and could affect the safety of the journalist and his family.”

Founder and leader of La Resistencia, Juan Muñico, alias “Jota Maelo,” denounced in an interview with the controversial media outlet Willax TV that he is the victim of political persecution.

According to La República, several members of this collective and the places where they meet clandestinely to plan "their actions to harass institutions and people” have been identified.

In that same interview, Muñico affirmed that he will denounce Chincha for allegedly having identified them as the authors of threats on social media.

“We are going to sue him. (…) But don't worry, we're not going to do anything to him. We don't waste time with people like you,” he said.

He also addressed the Minister of the Interior during the interview, regarding the investigation that will be opened on the collective as an alleged criminal organization.

"This investigation is not going to intimidate us, I would tell the minister that we are not afraid, that the struggle in the street will continue," he said.

In January 2021, Muñico was given a one year suspended prison sentence on the charge of aggravated defamation against the Legal Defense Institute, and its director Glatzer Tuesta, who also hosts an interview show. According to the Peruvian Federation of Journalists (FPP), the institute denounced Muñico for spreading false information on social networks, saying that they were a criminal, corrupt and pro-terrorist organization. 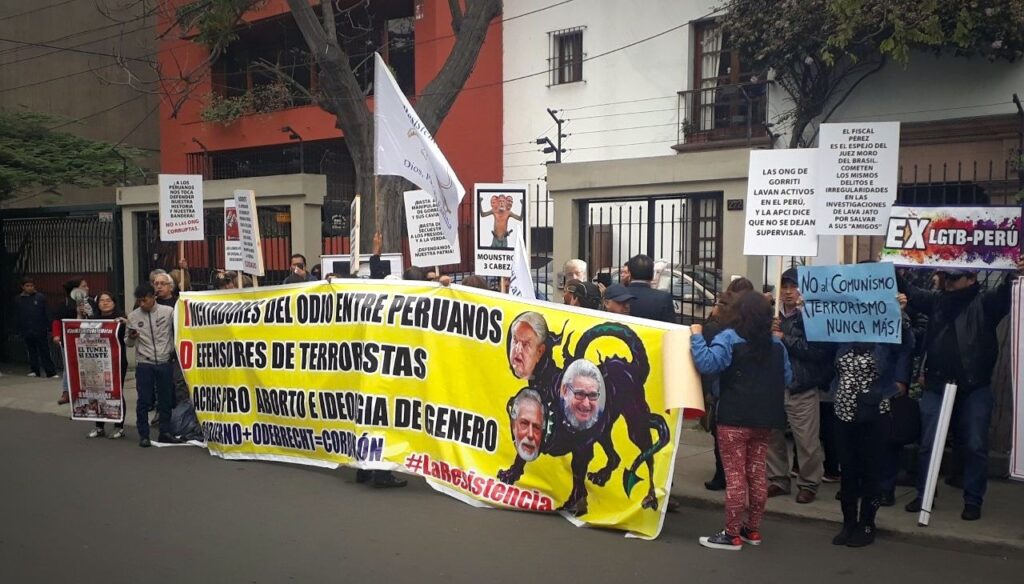 The journalist explained that “La Pestilencia,” as he refers to this collective, began to attack his media outlet based on reporting on the Lava Jato corruption scandal and the Lava Juez case. The latter is an investigation IDL-Reporteros published in July 2018 which revealed and analyzed audio recordings that showed alleged ties of high-ranking judges with figures and politicians involved in acts of corruption.

Members of La Resistencia and supporters went to the offices of IDL-Reporteros with banners and megaphones, launching anti-Semitic insults against Gorriti, accusing him and his team of being corrupt.

Initially, Gorriti argued, La Resistencia was related to the sectors of fujimorismo that at that time had control of Congress.

“Using a majority in Congress, along with several of their allies who also had corruption problems, they tried to attack us and they tried to coerce us in the Lava Juez case; They even tried to subpoena us to demand that we reveal our sources.”

When IDL-Reporteros and the program Panorama revealed the audio recordings between judges and officials of the Lava Juez case, the then-Supreme Prosecutor for Internal Oversight, Víctor Rodríguez Monteza, sent a court order to both media to reveal their sources.

According to Gorriti, when fujimorismo weakened on the eve of the 2021 electoral season, several members of the collective migrated to new support groups, such as that of businessman and former ultra-right presidential candidate, member of Opus Dei, Rafael López Aliaga.

"The relationship between far-right groups and far-right businessmen who support them is evident," Gorriti emphasized. This collective is not committed "to a specific leader," Gorriti added, "but to the most radical and the one in a position to provide them with the means also so that they can continue with their harassment."

“La Resistencia has been acting with impunity for years in the country. Among its targets are journalists, who are permanently stigmatized by the accusation of ‘communist,’ caviares (a term to refer to wealthy people), etc.,” Zuliana Lainez, secretary general of the ANP, told LJR.

Lainez regretted that the police forces and attorney general’s office continue without taking action against this collective even though the identities of several of its members are known thanks to investigative journalism, like that of IDL-Reporteros.

According to Lainez, the closeness of this collective with fujimorismo "is evident." Several of its members are shown in photographs with former candidates for Congress and other leaders of Keiko Fujimori's party, who separates herself from that group when "violence escalates," she added.

Among the most recent aggressions, the ANP reported an attack on a reporter from Canal N who managed to capture the image of her attacker on video, and later identify him as an alleged member of that collective.

“Our organization, in its capacity as dean of the sector, firmly demands the immediate action of the public prosecutor, considering that at least two of the aggressors are fully identified. Failure to take action from the entities that are responsible for prosecuting the crime leads to an escalation of violence against those on the front line of the news in crucial circumstances for the country,” the ANP said in its alert.

LJR unsuccessfully tried to communicate with Attorney General Zoraida Ávalos about whether there is any ongoing investigation by prosecutors against La Resistencia.

The second recent case of harassment against journalists and their outlets is that of the Salud con Lupa reporter who wrote an article on anti-vaccine movements. 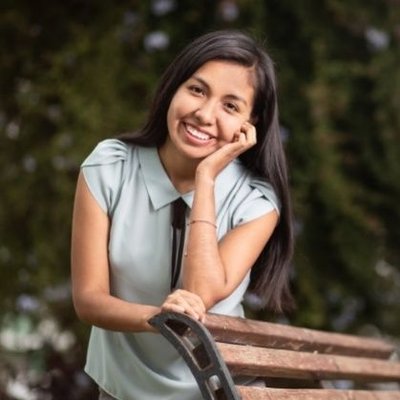 Journalist Melina Ccoillo Sandoval reported that Médicos por la Verdad en Perú is one of the eight anti-vaccine groups that spread false news in the country.

Since the article was published at the end of August, both the journalist and the outlet have received daily threats from supporters of that group, Fabiola Torres, director of Salud con Lupa, told LJR.

Médicos por la Verdad en Perú (Doctors for Truth in Peru) is an organization that originated in Germany by a group of doctors and has a presence in at least ten countries in Europe and Latin America, according to news agency EFE. Its messages spread information about cures against COVID-19, promote not wearing masks and deny the existence of the pandemic, the Spanish news agency said.

“With pseudoscientific language and a discourse that supposedly appeals to freedom, these groups linked to conservative strongholds spread conspiracy theories, and have taken to the networks and the streets to undermine public confidence in the vaccination process against the coronavirus,” Salud con Lupa wrote in a recent editorial.

One of the interviewees in Ccoillo’s article was the spokesperson for Médicos por la Verdad en Perú, Vanny Herrera, who contacted the journalist after the publication of the article, according to what Ccoillo told LJR. In that communication, the journalist said, Herrera told her that her report contained lies, that the government paid them to spread this news, and in a threatening way let her know that she had recorded the conversation they had previously held.

Later, Salud con Lupa began to receive various derogatory messages on its social networks to sabotage its contents, Torres said. The site also had access to group Telegram accounts where a photograph of Ccoillo circulated as a form of intimidation.

Torres said that they also receive constant threats by email. In one of the recent messages, she said, they were asked who pays them to write about vaccines, demanding that they review the thousands of deaths that are caused by vaccines and ending the message with the phrase "we'll meet you all later."

Torres also expressed that they are prepared to defend the journalism they carry out in a judicial setting.

“Our main concern is to protect the integrity and work of our journalists. We are not afraid of lawsuits because everything we report on vaccination is based on scientific evidence,” Torres said.

“What alarms us is the constant digital harassment and the contamination of our social networks with aggressive messages that call to ‘punish us’ for allegedly lying and hiding information. These messages seek to take away confidence from scientific journalism and it is dangerous that more and more people fall into the anti-vaccine discourse due to fear or lack of knowledge,” she added.

IPYS Peru issued an alert at the time about the threats against Salud con Lupa and its team, strongly condemning the harassment.

León, from IPYS, told LJR that the journalistic work that Salud con Lupa has been doing in this context of the health crisis caused by the pandemic is "truly exemplary in the fight against disinformation," always based on scientific studies and reliable sources.

"That seems to have caused discomfort in these groups, especially the note about eight anti-vaccine groups that are trying to boycott Peru's vaccination process," León said.

Peru continues to lead the world in the number of deaths per capita due to COVID-19, with more than 613 deaths per 100,000 inhabitants, according to data from John Hopkins University.