Venture capital funds are in search of innovative technologies with high potential for profit. They aren’t frequently looking for partners in journalism companies, that, in general, are struggling to survive in an environment with a scattered audience reluctant to pay for information. 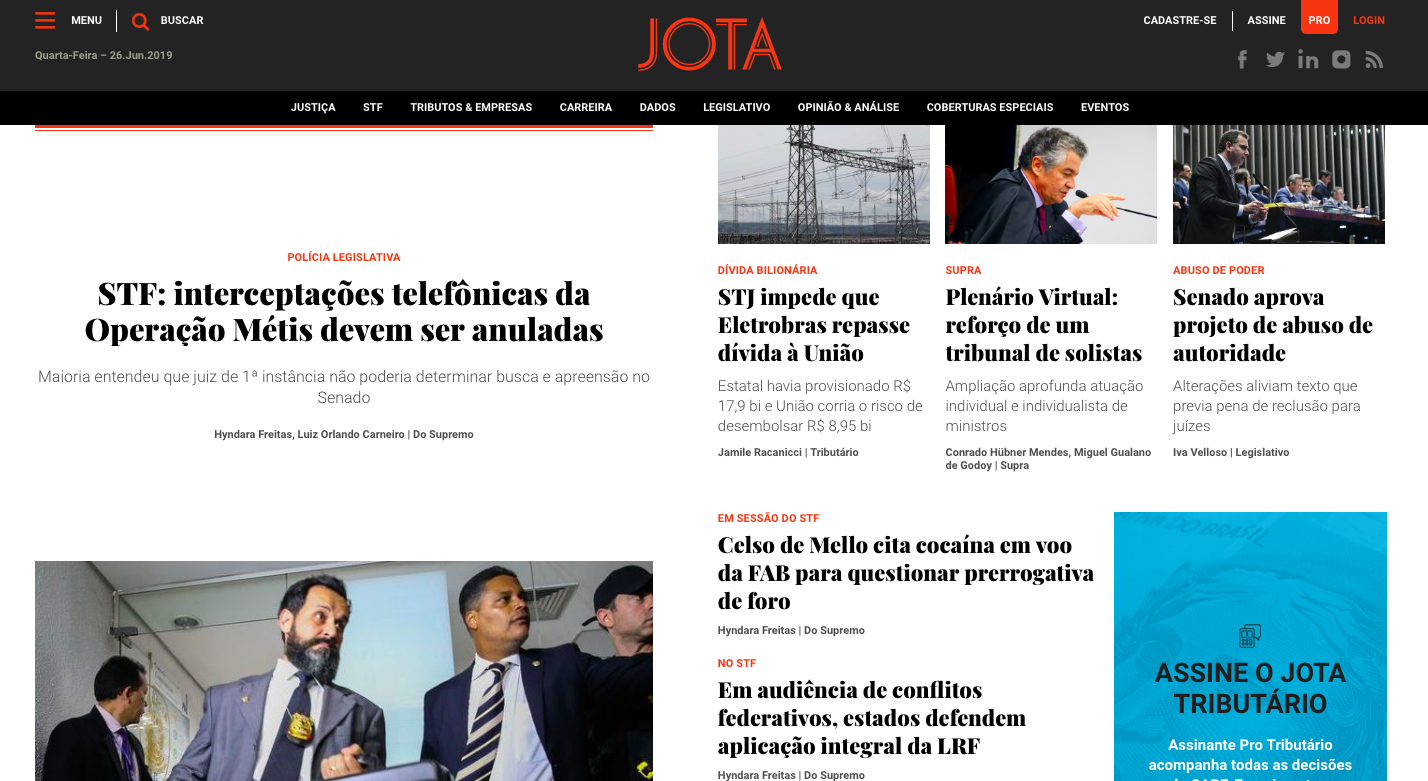 JOTA has expanded its coverage to include the three branches of the Brazilian government. (Screenshot)

However, in an unusual move in the Brazilian market, Astella Investimentos injected R $6.8 million (about US $1.7 million) into JOTA, a journalism startup that emerged in 2014 for in-depth coverage about the Brazilian judiciary, and that expanded its operations more recently to also cover the executive and legislative branches.

The investment, in practice, means that Astella bought a part of JOTA and thus became a minority partner of the startup, owner of an undisclosed percentage of the company.

"In the last ten years, we are seeing a profound change in journalism and the media sector, with people having a hard time giving value to content, distinguishing what is trustworthy and what is not," Laura Constantini, partner and co-founder of Astella, told the Knight Center. "We looked at various types of media/content companies and what we found interesting in JOTA is that they have a group of customers with great appreciation for the product."

Astella is a Brazilian venture capital fund that invests in technology companies. JOTA has been notable for being able to develop a network of subscribers eager for information about the inner workings of the three branches, whose decisions have the potential to impact their business.

"We began to form the thesis that in our view content has to be tied to people’s need to make decisions. JOTA is important for those who follow the financial market because it impacts the perception of risks of assets and future profitability. We understand that it’s an opportunity," Constantini explained.

The new partner, in addition to money, brings its expertise in technology-based companies and in the development of new businesses. Until now, JOTA’s growth was due to investments of its own partners and of the profit generated in recent years. Revenue rose from R $3.6 million (about US $936,000) in 2017 to R $6 million (about US $1.55 million) last year, according to Felipe Seligman, JOTA’s co-founder. Although operating in black from the beginning, the idea is to accelerate what has been achieved organically.

The entrance of venture capital also marks a phase of changes at JOTA, in which technology gains prevalence in relation to pure journalism. The goal is to sell not just content, but a technology solution that assists the subscriber in their information needs, with insight into decisions that depend on government actions.

"Our mission is to make public institutions more predictable. Journalism is potent, but it is more potent allied to data science. Political analysis without data is merely opinion. Data science without crossing of information runs the risk of correlating things that have no causality," said Seligman, now responsible for the area of growth at the startup.

Without abandoning the journalistic base that is in JOTA's DNA, the ambition now is to enter a new market, where the startup begins to compete with consulting and technology companies, with a subscriber who is even more demanding and willing to pay more. 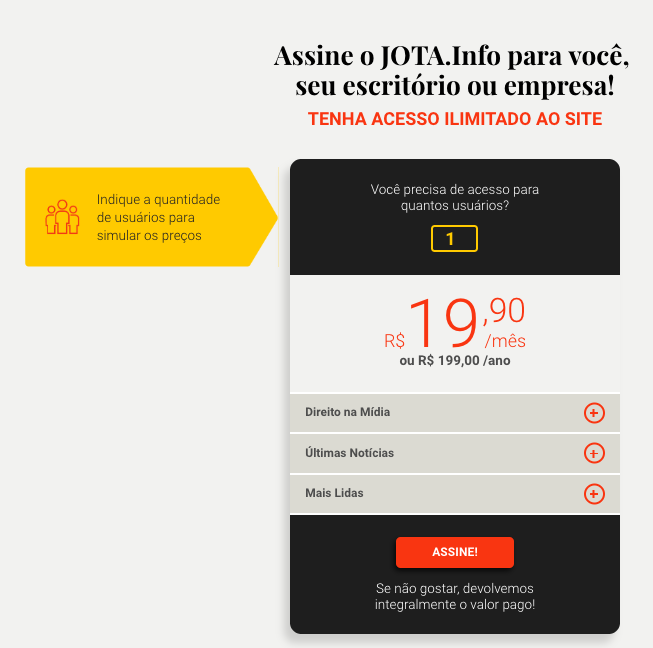 One of JOTA's strengths is its subscriber base. (Screenshot)

It is for this purpose that most of Astella's money will be used, for the hiring of scientists and developers for JOTA Labs, the company's data science laboratory. From there, an information platform for subscribers will be developed, capable of generating insights from the information gathered by journalists. It is not clear yet how this will happen, but it is part of the work of the team that is being assembled.

"We are looking to understand what kind of platform our subscribers need. Our subscribers hire a variety of services, such as consulting, to identify opportunities and gain insights," Seligman said.

It is the potential development of this expertise that attracted the venture capitalists, aiming to open new markets and replicate the model in other countries.

"The demand for predictability of governments will grow. If we prove that this model works in Brazil, bringing competent journalists to help the client in decision making, it can be replicated to other regions and other spheres of power. We see considerable value in this, in making all processes more transparent for a large group of people," Constantini explained.

Seligman is cautious in talking about the changes in the company and how they move away, to a certain extent, from the initial goal, which was to produce in-depth coverage of the judiciary, but using traditional journalistic tools. Technology now has a much more prominent role, although the principles of journalism are JOTA's engine, he added. The journalist says that this is not a turnaround, but a greater direction in the coverage itself, going from the reporting of what happened to trying to scientifically predict future scenarios.

“We are a successful case in an industry with more questions than answers. JOTA is not the solution to all the problems in the world. Wanting to or not, it became a reference, but do we want to be the reference at the moment, and not continue to learn? We have the opportunity to use as a benchmark not media companies, but technology,” Seligman said.

A difficult path to replicate

For communications researchers consulted by the Knight Center, the investment is positive for the market, but it is far from being a path to be followed by most of the new journalism companies emerging in the country.

For Patrícia Maurício, a professor in the communications department at PUC-Rio, the entrance of a new investor always raises the question of maintaining editorial independence, which is what guarantees the quality of journalism of the site.

"For a venture capital fund, I believe it is a good investment. For the journalism of the website, I have doubts. It is always good to have a financial contribution to survive, but the independence of the outlet is compromised with who pays," said Maurício, whose research focuses on political economy of media outlets.

According to Seligman, JOTA’s new partners will not influence editorial decisions, nor do they have a specific interest in media.

"They will help us organize the company to be prepared for growth. The idea is to professionalize business opportunity, to give predictability to the sales process. To scale, you need to predict how much of that market you can get as customers, how much it costs to obtain a customer, what the specific return over time is. To do this, you need intelligence and best practices," he said.

For Adriana Barsotti, professor of journalism at the Superior School of Propaganda and Marketing in Rio de Janeiro (ESPM) and author of the book "The Changing Journalist: From Watchdog to Audience Mobilizer,” this investment shows the strength of new journalism companies born in the digital environment.

"Thanks to these startups, vacancies have been created, while the traditional newsroom shrinks. I see a very interesting scenario. Beginner journalists have to keep an eye on this movement," said Barsotti, who also wrote “A front page story: From crying to silence in online journalism.”

One of the great assets of JOTA, recognized by Astella, is the subscriber base. In this sense, Barsotti sees a change of mindset crucial in relation to traditional communication companies, which for a long time, and even today, she said underestimate the needs of the audience.

"Recently, I gave a lecture at a newspaper and asked how much time they spent thinking, talking or answering the customer they want to pay the bill, and they did not know. If it is the reader who is going to sustain the business, it has to be the center of attention, but it is not in most cases," she said.

For her, JOTA has the advantage of being, through the credibility of its journalism, a safe harbor for the reader in a sea of disinformation that it is required to navigate.

“If companies make decisions based on information that they give, with certainty it is because they trust the journalistic work. It’s their value,” she said.